As big names like Aramark and Thai Union progress on supply chains, smaller-fry 'seatech' startups bring the promise of satellite and blockchain tech.

Forget the romantic image of a lonely fisherman chasing his catch on the open water. Fishing supply chains have become sprawling, technology-driven operations rife with overfishing and human rights abuses.

For that reason, fishing companies and the stores that sell their products are increasingly on the hook for the environmental and human effects of their supply chains. The need to know where fish comes from for legal compliance purposes and resource preservation, from sea to shelf, has spawned "seatech."

Monica Jain, founder of Fish 2.0, an organization that fosters entrepreneurship in sustainable fishing and aquaculture, describes this space as "new monitoring, visibility, production and processing tools for the seafood industry."

One-third of global fishing stocks are depleted, according to the Greenpeace Sea of Distress report issued in October. And global fish catches have been declining since the 1990s. With seafood production expected to increase 20 percent by 2025, ocean ecosystems are being decimated. Furthermore, the U.S. State Department has found forced labor and human trafficking on fishing vessels or processing facilities in more than 50 countries.

In response, Greenpeace found that major food industry players including Sodexo, Aramark and Compass group are taking strides towards protecting the oceans and the people who make a living from them by selling responsibly sourced seafood, and increasing transparency and better practices at sea.

Aramark, for example, is the first U.S. foodservice company to procure seafood from vessels that don't participate in transshipment, policies that allow vessels to fish for years and can breed labor and human rights abuses. Also this year, global tuna giant Thai Union has taken the lead to source sustainably caught tuna and protect worker's rights.

We need more widgets in the water.

Greenpeace and others advocate for traceability to make these policies work. With problems running rampant — more than one-third of seafood is mislabeled in North America, and up to one-third of wild-caught seafood U.S. imports are illegal — there is a large global opportunity for data analytics, monitoring, imaging and other technologies.

Seatech, as nonprofit Future of Fish describes it, can tell purchasers if seafood was pirated or tied to human rights abuses; can ensure that fish is labeled correctly; and can provide data on natural resource stocks to companies, governments and NGOs and help to solidify best practices in sourcing.

"We need more widgets in the water," said Simone Campara, CEO of ColomboSky, a startup that created traceability technology for marine aquaculture. It is a water-quality monitoring tool that uses satellite images to monitor stock health, forecast threats such as algae or jellyfish blooms. ColomboSky claims it can reduce aquaculture loss by 12.5 percent.

ColomboSky was one of 40 seafood companies pitching to investors this week at Fish 2.0 Innovation Forum at Stanford University. The business competition awarded cash prizes to eight ventures helping fishers to increase income, protect aquaculture and ensure traceability. Each winner received $5,000 and the chance to connect with food industry leaders. 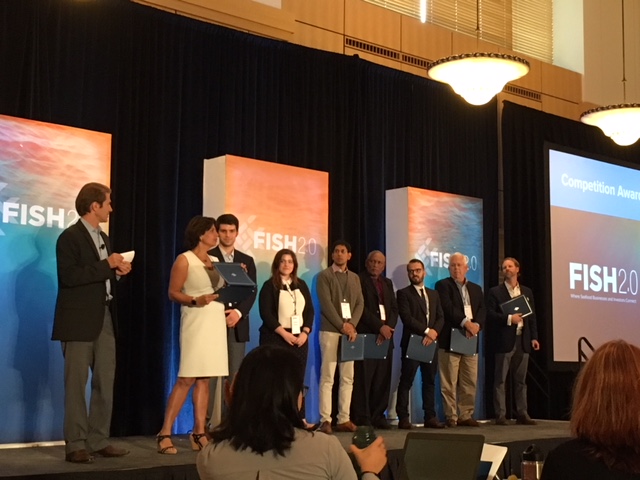 "Seventy-five percent of businesses record traceability information on paper," said Tamm, who was raised in the commercial fishing world. He saw "lots of pride, but also problems," including illegal fishing, seafood labeling fraud and forced labor.

Another startup, Sustainable Fishery Trade, connects fishers directly with high-end restaurants that hold themselves to a high quality standard. Its CEO, Simone Pisu, sees enough room for different kinds of companies to serve the market.

There is a global industry opportunity for data analytics, monitoring, imaging and other technologies to transform the seafood sector.

"Maybe we can adopt their technology and join powers to grow faster and further," he said. "It's the exact time to invest in traceability; it's needed in several sectors, like in mining, where conditions are similar." He linked the proliferation of traceability technology to other industry disruptors such as Uber: "You just use the installed capacity and build on it. Fisheries are similar."

Big retailers are listening to the startup activity, too. Rob Terry, CTO and founder of SmartCatch, a 4-year-old company from Silicon Valley that reduces bycatch using blockchain technology, is the former director of e-commerce for Whole Foods. The company incentivizes fishers to use the technology by providing "micropayments" in exchange for captured data.

"What's happening [in traceability] is the intersection of technology and real-world problems," he said. "What I saw with Whole Foods is that the organic industry grew from almost a joke to a multi-billion dollar industry." And the rise of sustainable seafood technology speaks not only to consumers' health concerns, but it also improves the health of workers and ecosytems.

From the retailer perspective, one component of a good sustainability program is to ensure that you can show that you haven't "greenwashed," said Phil Gibson, CEO of Resiliensea Group, who used to work for Safeway as the group director of perishable seafood.

"That's a specific component at Safeway, and the program has been repeated by a number of other retailers in the sector," he said. "It's getting broader and broader."