One of the world’s top chocolate companies last week shared new plans for reducing its impact on the planet — including committing to set science-based targets. But what sets the Hershey Co. apart from its peers is not this commitment. It’s the journey behind how it got here.

Leading up to the announcement, a lot happened behind the scenes: Data was collected; numbers were crunched; and methodologies were chosen. It required time, human capital and expertise. But Hershey didn’t do it alone. The company hired a graduate student to help with the heavy lifting that comes before a target of this nature can be set.

Many companies are joining the Science Based Target initiative (SBTi), about 350 at the latest tally. And a lot more will. But a large group of companies also want to and simply don’t know how. For this group, it’s a question of making the SBTi methodology align with their climate and business goals — like with Hershey.

The chocolate manufacturer set climate-related goals as part of its Shared Goodness program. Until last week, those goals were the company’s go-to blueprint for reducing its carbon footprint. But like many companies, the targets were not aligned with the most up-to-date climate science. (Editor's note: Hershey was one of the companies that didn't fare well on the latest CDP A List, released earlier this month.)

Hershey hired a graduate student to help with the heavy lifting and data gathering that comes before setting a science-based target.

Joining the SBTi meant Hershey had to update its greenhouse gas (GHG) emissions goals to be in line with the level of decarbonization required to keep global temperature increases below 2 degrees Celsius compared to pre-industrial temperatures.

On top of that, its plan had to be a smart business move.

Harini Rengarajan, a Babson College graduate student and EDF Climate Corps fellow at the time, was hired to update the company’s current GHG emissions goals and determine whether setting a science-based target was possible.

Before any target-setting could take place, Hershey first had to calculate the carbon footprint of its entire operations. That included the greenhouse gases that came from its own facilities and also its Scope 3 emissions, the carbon footprint associated with supply chain and indirect activities. Scope 3 emissions often account for most of a company’s GHG emissions. And they’re also the most challenging to quantify.

Hershey’s existing 25 x 25 goals, which include reducing GHG emissions by 25 percent by 2025 compared to a 2009 baseline, do not include Scope 3 emissions. This meant that a large amount of the company’s footprint was not accounted for in the previous reduction commitment. It also meant an opportunity for Hershey to set more impactful goals and track performance, both internally and against its peers.

Use a two-part approach when setting a science-based target

Using her background in both engineering and business, and her experience in supply chain management and supplier engagement, Rengarajan put together a GHG inventory that included Scope 1, 2 and 3 emissions.

She did so by meeting with stakeholders across Hershey’s departments to collect data and to better understand the ins and outs of the company’s business operations. She then calculated emission factors specific to the company’s specialized set of ingredients and services.

Next, Rengarajan began the modeling. She studied six science-based targets methodologies before arriving at the option best suited for Hershey. She identified a range of targets that would hit the company’s goals and business drivers. Using a combination of criteria, such as timeframe, level of ambition and internal alignment, she presented Hershey with a potential plan to develop a science-based target that could meet the rigorous oversight requirements of the SBTi.

Hershey in late January set the company on a new path toward addressing its climate risks, in committing to set goals inspired by the SBTi. In the weeks ahead, more companies will walk down that path, too. Each will have a unique journey as to how it got to the point where it confidently could make a commitment to develop a science-based target.

For some, like Hershey, a partnership or outside perspective might be a key ingredient in getting there. 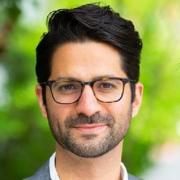 How emerging technologies are driving circularity, electric transportation and more

See all by Daniel Hill