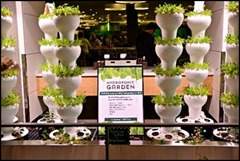 Microsoft
A glimpse of Microsoft's urban farming experiment to augment office dining options.
When it comes to challenges such as figuring out how to grow food more efficiently, we’re always interested in the role that IT is playing in shaping new strategies to reduce the amount of resources drained in the process.

In fact, one experiment in urban farming is taking place right under our own roof here at Microsoft, run by Mark Freeman and the company’s dining services team, Dining at Microsoft. 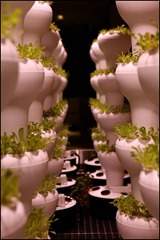 By growing food onsite and vertically integrating part of our food production, the team has created a unique opportunity to improve customer experience and quality of produce served on-site while also decreasing the company’s ecological footprint.

The initial focus is on produce — primarily microgreens and lettuce — in aeroponic and hydroponic growing towers found in several locations on the Microsoft campus. Hydroponics use significantly less water than conventional farming, in some cases 90 percent less compared to conventional farming. The water, except for that which evaporates or is used by plants, is continuously recycled. 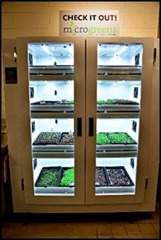 Microsoft
Experimenting with new types of lighting has been one sustainability focus for Microsoft.

Automated cultivation machines called Urban Cultivators are being used to house and grow the produce. The watering, light cycles and ventilation system are all automated and can be controlled via a screen. The commercial-scale machines are capable of producing 16 trays of microgreens at a time and can go from seed to harvest in as little as eight days.

Once the produce goes through these processes, being pioneered for urban farming operations, the microgreens and lettuce are used in on-campus dining to top entrees and be incorporated into Microsoft Café salad bars. 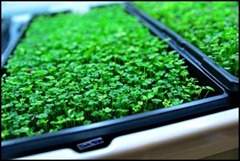 Microsoft
One small bounty yielded by Microsoft's in-office farming operation.
As this experiment continues, Dining at Microsoft seeks additional ways to improve the growing process and to increase the efficiency and sustainability of current methods.

One example is the evolution of lighting used to grow the plants. Previous uses of LED and halogen lights have given way to cutting-edge plasma lights produced by iUNU, which are up to 30 percent more efficient than LEDs.

These nascent efforts at Microsoft mirror demand for larger-scale efficient and sustainable food production increasing in cities around the world. As urban and indoor farming becomes a bigger necessity to meet demands, the potential for technology to assist in those efforts — for companies, cities and individual families — will be critical.

This article initially was published by Microsoft and is reprinted here with permission.

How indoor ag is growing a resilient food revolution