San Francisco International Airport's Terminal 2 reopens this week after a $383 million overhaul that has created an environmental showcase from the shell of a tired facility that was nearly six decades old.

The ambitious project by the city, its airport and the design-build team of Gensler and Turner Construction is a bid to revive the iconic status of the facility once known as Central Terminal, which boasted the latest technology and amenities for commercial aviation when the building opened in 1954.

The operators of T2, the new home of domestic flights for American Airlines and San Francisco-based Virgin America, seek to update those claims with building systems that exceed energy reductions demanded by California code by 15 percent; water-saving measures and fixtures that cut consumption by an average of 40 percent; a design that bathes the facility in natural light; decor that's more akin to the hospitality industry than commercial travel; and shops, restaurants and other diversions that can be found at an upscale mall.

Entering the building, "we immediately felt we'd walked into a five-star hotel lobby," said San Francisco Mayor Edwin Lee, who was among the dignitaries and business leaders attending a media preview of the terminal yesterday.

That's precisely what was intended, said Airport Director John L. Martin, who presided over the event and praised the project partners for completing the renovation on time and under budget. A community open house celebration is scheduled Saturday at T2, and the terminal officially opens to flights next Thursday, April 14. 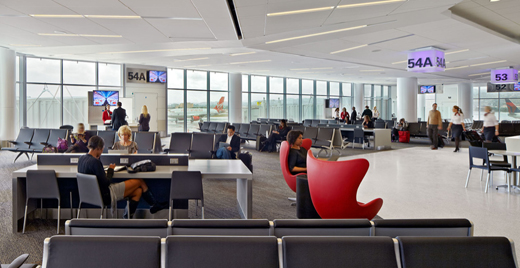 With T2's twin focus on sustainability and elevating the travel experience, the airport and its operators are trying to recapture yesteryear's lost elegance (and romance, as Martin put it) of flying, while incorporating elements that are key to 21st century living.

'We're trying to build a 21st century airport as we advance new ways to think about travel in the future," said Newsom. The lieutenant governor, who was San Francisco's mayor when the design phase of T2 began in April 2008, noted that the airlines making their home in the revamped terminal bridge the facility's past and its future.

The carriers underscored that connection by bringing vintage, new and next-gen aircraft to the event.

American Airlines, a tenant in the Central Terminal in 1954, brought a vintage DC-3 and its Susan G. Komen Special Edition 757 to T2 yesterday.

Virgin America's showstoppers were its Virgin Galactic WhiteKnightTwo - SpaceShipTwo space voyage launch system and an Airbus 320 emblazoned with the legend: "My other ride's a spaceship." Both made their inaugural landings at T2. Traveling aboard the Airbus were Branson, space pioneer Buzz Aldrin, Newsom, supporters of the Galactic Unite youth education program of the Virgin Group's nonprofit foundation, Virgin Unite, and others. "It's incredible to be here today," said Branson. "This is the first spaceship ever landed at a commercial airport."

Here is Virgin America's video of the event:

Virgin America, American Airlines and the airport are all seeking LEED green building certification for elements of T2.

Virgin America, the only airline based in California, wants to attain a LEED-Platinum rating, the highest certification level of the U.S. Green Business Council, for the company's offices and Virgin Village crew lounge. American is aiming for LEED-Silver certification for its Admirals Club. The airport project partners have applied for LEED-Gold certification for the 640,000-square-foot facility that's designed to accommodate as many as 5.5 million passengers a year. The renovation plans were targeted to meet Leadership in Energy and Environmental Design criteria for certification at the silver level (GreenBiz.com's detailed those expectations in an article last spring). But as work progressed, the project partners set their sights higher, said SFO Project Manager Ray Quesada.

Quesada and Gensler Senior Associate Melissa Mizell, who detailed projects plans during a hard hat tour of the terminal last May, walked through the site with visitors yesterday, comparing the vision for the facility to the nearly finished product as work crews and vendors applied final touches.

"It very much feels like what we hoped it would feel like -- and in some ways it's better," said Mizell.

Against a backdrop of sustainable practices, operations and materials, all elements of the terminal are designed to make travelers' experience in the facility more enjoyable and comforting, if not stress free, Mizell and Quesada said.

For example, the security area is dedicated to serving travelers, Quesada said. Airline crews, airport staff and others with business in facility will be routed through a separate security process so travelers' progress won't be impeded.

And as visitors flow through security they have a light-filled view of the terminal all way through to planes sitting just beyond the gates at the far end of the building. Along the way are restaurants, shops, displays and other amenities designed to ease the anxious traveler.

"We designed this so the vista would be clear, so the travelers can see where they need to go," Mizell said. Design elements, including patterns on the terrazzo floors, also help point the way. "After that, then it's all about choice," she said.

Need a soothing mani-pedi? There's a mini spa. Craving a caffeine fix, chocolate or an adult beverage? There are coffee bars, a candy shop, a wine bar and a cocktail lounge. Locavores can have a field day at the cafes, and art lovers can enjoy the only airport gallery accredited by the American Association of Museums.

Got kids? Parents can bring their children to two interactive play areas created by artists. Can't do without wifi? It's free in the terminal and there are 350 sockets to recharge personal electronics.

Want water? Two hydration stations enable travelers to fill their water bottles. Have to dispose of food wrappers or newspapers? With a zero-waste goal, the terminal is replete with recycling bins, receptacles for composting and trash baskets. Don't understand what goes where? Visual aids are on bins, and other sustainability tips can be found throughout the terminal -- by sinks, commodes, hand dryers and watering stations.

And for those who just need to sit, there are plenty choices to do that, too. Designers selected a variety of chairs and benches for travelers who want to rest or work. 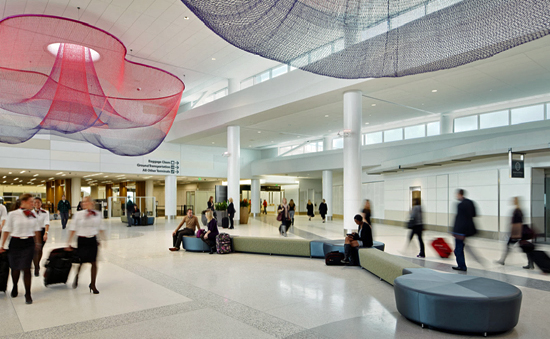