Shareable scooters may seem sustainable, but are they really?

Zipping around town on tiny two-wheelers seems like the green thing to do — but there’s more to sustainability than saving energy.

Just as the sun starts creeping over the horizon on a late April morning, a young man in cut-off jeans and flip flops pulls his SUV to a stop on a side street in Atlanta. He unloads half a dozen fully charged Bird electric scooters for people needing quick, on-demand transportation to rent via phone app during the day. Then he loads up ones that need recharging and sets aside those needing repair by the company’s technicians. While riding by on bike, I stop to ask him what happens to scooters that are beyond repair.

"Scooters are very environmentally friendly, so I’m sure they’re recycled,” he replies confidently.

Sure enough, Bird touts itself as "committed to providing environmentally friendly transportation options," according to government communications and public relations manager Mackenzie Long. Bird claims to reuse all possible vehicle parts and recycle the rest.

But there is growing concern about whether such sustainability claims for shared-use scooters are enough. According to an analysis by Alison Griswold, a reporter for Quartz who specializes in start-ups and the sharing economy, data from a pilot test of Bird and Lime scooters in Louisville, Kentucky, suggest that the average scooter lasted about a month in the city. That’s a moon cycle. The refrigerated shelf-life of a carton of yogurt. Short. 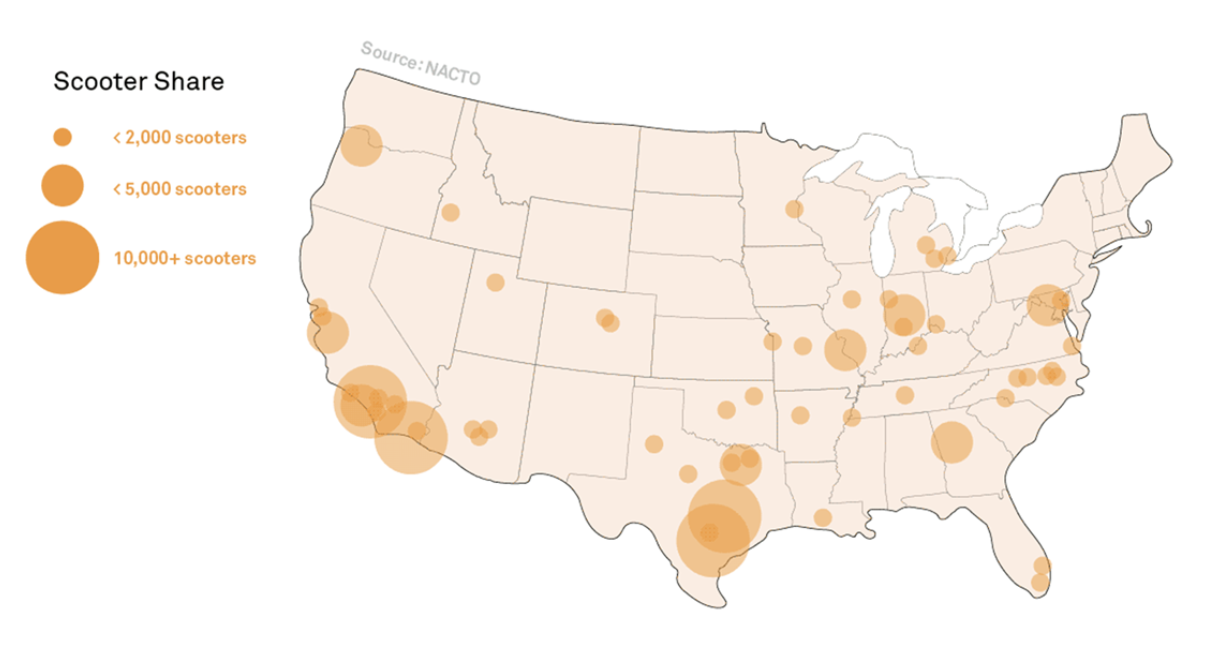 Granted, the scooters in the study predominantly were retail grade, not built for the rigors of shared use, plus they could have been moved to another city before their life was over, thereby potentially skewing the results. Bird claims several months as a more realistic average for its first-generation shared scooters before they succumb to the need for replacement due to a broken stem or deck, vandalism or some other usefulness-ending incident.

Still. Can vehicles with a life span measured in weeks be considered sustainable? And can anything be done to make them more durable and their end-of-life fate more environmentally responsible?

Scooter companies are working to extend life span through a variety of methods, including designing and producing new models (mostly with the Chinese company Ninebot) to better withstand shared usage, varied weather conditions, diverse topography and vandalism. Additionally, they are providing consistent and comprehensive maintenance; educating users on proper handling; and harvesting parts such as wheels and batteries to use on other scooters.

Skip Scooters is one of two scooter companies selected by the San Francisco Municipal Transportation Agency (SFMTA) for the city’s pilot scooter program. According to Skip head of growth Max Pike, the company, already active in Washington, D.C., recently switched out its old fleet for a new, more durable scooter model. "Four months in, our vehicles are still in operation and have not reached the end of their useful life," Pike says.

Responsible reuse, recycling and eventually disposal can, with sufficient encouragement from municipalities, be part of scooters’ futures.

Four months may seem like a comparatively long time, but it’s still only the life span of a red blood cell. New designs from Bird, Bird Zero and Bird One, are predicted to last from eight months to a year or longer, according to Long.

A company called Superpedestrian has created an innovative way to handle needs for service. Founded and run by Assaf Biderman, associate director of the MIT Senseable City Laboratory, Superpedestrian produces scooters with artificial intelligence–based software that helps extend their lives. "The software allows our scooters to autonomously protect themselves from failures that would typically break other scooters — significantly improving the lifetime of a vehicle. while reducing operating costs and maximizing safety,” says Biderman.

Biderman says the scooters will launch in August in partnership with unnamed scooter operators. Based on pilot runs by Superpedestrian, Biderman expects the life span of participating scooters to increase to between nine and 18 months as a result. Additionally, batteries will hold a charge for three to seven days.

These longer-predicted scooter life spans match the freezer shelf life of frozen mixed vegetables, which means that even in the best-case scenarios, these items are not on their way to becoming hand-me-down heirlooms anytime soon. And with more than 2 million electric shared scooters deployed globally, according to Biderman, environmentally friendly end-of-life disposal is an issue worth addressing sooner rather than later.

"Sustainability is a bedrock principle and operating guideline for the city of Kansas City," says Chris Hernandez, the city’s director of communications. "We strive to incorporate sustainability practices into all projects, so it’s natural that we would call out sustainability in our proposed pilot program for scooters and e-bikes."

As part of its scooter permit application, Portland, Oregon, asks if the scooter company is providing a life-cycle assessment.

As part of its scooter permit application, Portland, Oregon, asks if the scooter company is providing a life-cycle assessment — which it defines as "an assessment of environmental impacts associated with all the stages of a product’s life from raw material extraction through materials processing, manufacture, distribution, use, repair and maintenance, and disposal or recycling." All 12 scooter companies that submitted proposals to the Portland Bureau of Transportation indicated they recycle batteries and metal responsibly. None included a life-cycle analysis, but almost all of the publicly accessible proposals indicate how each company would produce a life-cycle analysis within six months.

Three companies have permits to operate in Portland and four more are close to obtaining permits, according to John Brady, director of communications and public involvement for the Portland Bureau of Transportation. The bureau is requiring all to produce a life-cycle analysis by the end of 2019.

Efforts to encourage responsible end-of-life planning are not universal, however. Other cities, including Denver, Detroit, Tempe and Tulsa, don’t mention disposal or recycling in their scooter permit applications. And while the National Association of City Transportation Officials (NACTO), which represents 71 major North American cities and 10 transit agencies, has produced a document titled Guidelines for the Regulation and Management of Shared Active Transportation, the document does not suggest including end-of-life recycling requirements in requests for proposal or permit applications. 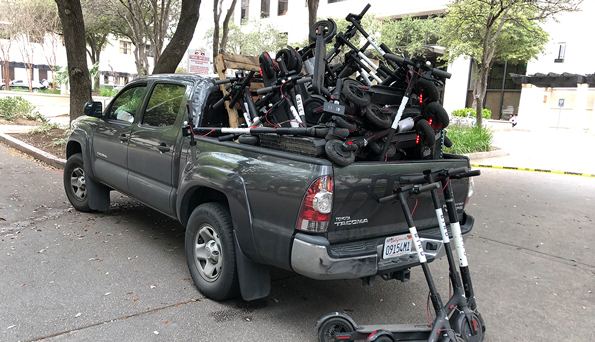 What’s also unknown is the extent to which plans for environmentally responsible end-of-life management match reality. Both Bird and Lime claim to recycle in all markets. But in Atlanta, a visit to PirkleInc found no scooters in the metal scrapyard closest to downtown Atlanta. Although asked multiple times, a spokesperson for Bird did not reveal where scooters are recycled. A spokesperson for Lime would not provide an exact recycling location in Atlanta, either.

That said, there are signs that responsible reuse, recycling and eventually disposal can, with sufficient encouragement from municipalities, be part of scooters’ futures. When asked about extending the lifespan of scooters and addressing end-of-life concerns, Pike noted that Skip Scooters reuses parts where possible and works to responsibly dispose of batteries and recycle other materials.

"When a scooter reaches the end of its useful life, Skip repair technicians salvage remaining parts to be used for repairs on other scooters," he wrote in an email. "Our goal is to deliver a sustainable transit solution for riders and for the environment."

Editor’s note: Pattie Baker wrote this story as a participant in the Ensia Mentor Program. The mentor for the project was Fred Pearce.

See all by Pattie Baker