In the last few years, a couple of multi-billion dollar companies — initially marketed as part of a new sharing economy — devoured people’s attention. After these giants discredited the concept, many thought the ideas behind it were too naive and unrealistic to begin with. The forces of capitalism, neoliberalism and our human nature are too strong to try to change them, some believed.

Reality is a bit more complex.

To prove that the sharing movement is alive and thriving, Shareable has been working on a very ambitious project: a collection of the most exciting and innovative cases of sharing and urban commons underway around the world. With 137 case studies drawn from 80 cities in 35 countries focusing on housing, mobility, food, work, energy, land, waste, water, technology, finance and governance, the Sharing Cities movement shows that local solutions really can tackle global problems.

Tom Llewellyn, coordinator of the Sharing Cities Network, spoke to us about how these initiatives are paving the way to a better future.

Fernanda Marin: Let's start with the basics. How do you define a sharing city? Is there a framework or methodology? 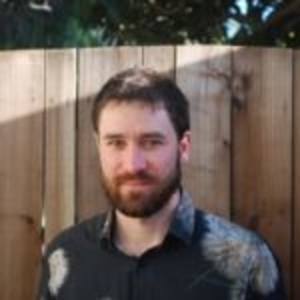 Tom Llewellyn: We set forth a series of 10 principles, rather than a specific framework or definition of what makes a sharing city. We feel that the idea of the sharing city is aspirational, meaning it is a process more than a finish line. In that sense, while a number of cities have declared themselves to be sharing cities, there isn’t a single one that is all the way there yet.

Solidarity would be the first principle we feel a sharing city should work to meet. The idea is for people within the city to work together for the common good rather than competing for scarce resources. The sharing city is of, by and for all people, no matter their race, class, gender, sexual orientation or ability. At a core, these cities are primarily civic, meaning residents would be focused on taking care of each other as well as partner cities, creating a cross-city solidarity.

Marin: In your experience, is activating the urban commons more successful when done by grassroots organizations or by local governments?

Llewellyn: It takes both. The main idea of the commons, in general, is that for them to be successful it takes a community behind it — to manage that resource — and a certain amount of support from the government to make sure that resources can be managed in a sustainable fashion. 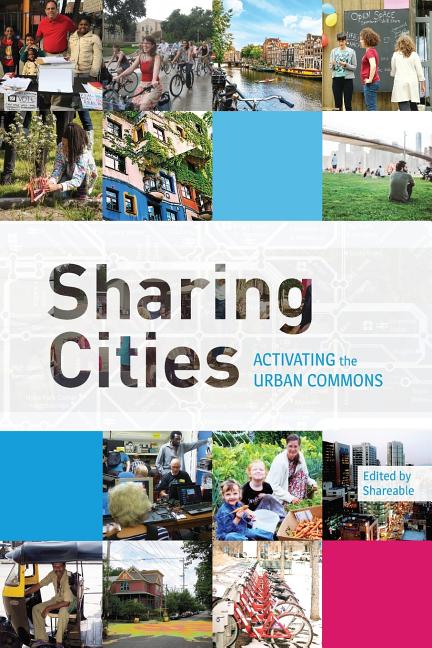 There is also a need to partner with the market forces. There are some great examples of that cooperation, one coming from Portland, Oregon called the City Repair Project. The community there wanted to rethink how to use the commonly held properties. They started by painting murals in the middle of intersections. It was done initially after a couple of children were run over in a neighborhood, so residents came together to make sure it never happened again. They had a block party and painted the intersection with a mural as a memorial.

Initially, the city pushed back and destroyed it. This caused a huge outrage in the city by the residents, not only those involved in the project. The government ended up legitimizing the policy and allowing residents to paint their streets. Over time, some people involved in this project moved into the government, and are now able to help maintain the practice. 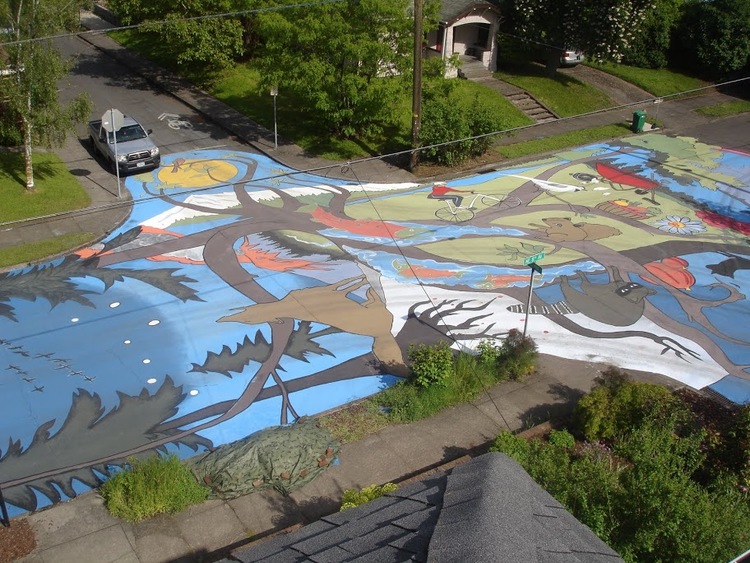 There are now more than 70 intersections painted with murals, many with benches on the corners, open libraries, etc. What is incredible is having the community driving it, the city supporting it by giving the permits for no cost at all as well as businesses involved. A number of local hardware stores have sponsored the projects, providing the paint and other resources. This is a great example of the relationships that can form around the commons and the balance between the community, the government and the market.

Marin: Have you noticed any interesting trends in the movement? Are some themes more popular, more successful or harder to implement?

Llewellyn: Yes. Food is the easiest place to start. Food is historically something that brings people together. Be it community gardens or networks of food distribution, these policies are definitely amongst the most popularly adopted.

A great example is the 596 Acres project. It started as a community that had an empty lot in their neighborhood. They found out that it was owned by the city, so they worked with the local government and were able to turn it into a community garden. Through their research, they discovered 596 acres are owned by the city.

Some were held back for real estate development but a lot of them didn’t have plans in the near future. Now around 200 of those acres have been transformed into community spaces in less than 10 years. So it was the desire to come together around food that enabled the transformation of all those properties.

Solidarity would be the first principle we feel a sharing city should work to meet.

On the other hand, the hardest policies to implement are in areas where there is a history of ingrained institutions with a lot of power. The technology sphere is the best example, most notably internet service providers. In the U.S., the market is dominated by three companies, so the entry barriers are immensely high. Yet there are also a number of projects trying to work their way, like FreiFunk in Germany where people have been able to set-up local community-driven internet networks. So even when businesses have a lot of control, there are ways to take a little bit of that back.

Marin: Many initiatives that work well in a city sometimes cannot be scaled and should not be reproduced elsewhere, as the conditions that made it succeed cannot be easily replicated. How can policy-makers and entrepreneurs better adopt the core learnings of the case studies presented?

Llewellyn: This question is one that we reflected a lot when we were writing the book. We decided not to include cases that were hard to replicate in other cities or examples that only made sense in a particular context. The idea was that every single example is either commons-based or is enabling the participation of the community. And as proof, most things we chose already have been replicated.

Marin: What is the biggest myth or utopian dream that has been proven real by the projects you explored?

Llewellyn: Our goal was to show what can actually be achieved; what we refer to as a concrete utopia, or that it pushes for that. Maybe the ideal sharing city does not exist anywhere right now, but the building blocks for that city exist; they are just all over the world. I believe proving that there are amazing projects in a variety of sectors across the world breaks down the unachievable utopian critique.

Humanitas, the very first case study, is a wonderful example. This Netherlands-based project has proven how intergenerational living works. This is an elder-care residence that also provides housing to students and young people. The exchange for living there is 30 hours of their time per month, engaging with the elderly community.

The project has been so successful they have set up in multiple locations. This is a very encouraging concept when we think of the baby-boom generation globally aging along with the housing-crisis the millennial generation is going through. This is a model for institutions to copy or for individuals to replicate.

The hardest policies to implement are in areas where there is a history of ingrained institutions with a lot of power.

Another great example of things that were thought impossible but are actually possible would be the Community Bill of Rights in the U.S. It allows a city or a county to draft civil laws that guarantee certain community rights, including the right to clean air, water, the protection of natural ecosystems, etc.

Now when a community passes a law (there have been over 200 so far) it can ban certain extractive businesses because they go against that community bill of rights. The best example is fracking. Many states have passed legislation to bypass local governments, so businesses were able to come in and destroy the local ecosystem. Up to this point, there hadn’t been any way for cities and communities to fight back.

Now if companies want to frack, they have to unequivocally prove that their activity won't hurt the environment. And this was completely driven by the community, and a big number of organizations, most notably the Community Environmental Legal Defense Fund (CELDF). It is incredibly encouraging that out of the 200 cases, only four were taken to court; the rest have been unchallenged.

Marin: What are your favorite three case studies in the book and why?

Llewellyn: The first one is rooted in France and is the re-municipalization of water. Back in the early 1990s, originating in France and then becoming a standard global practice, large multi-national corporations started privatizing regional water systems.

Veolia, Suez and others began buying water rights all over the world, claiming they could provide cheaper services. Over time it became clear that the companies were not actually delivering a superior product; on the contrary, the quality had significantly decreased as they were not investing enough in the infrastructure. Hundreds of cities and regions handed over their water to a very few numbers of international corporations.

Maybe the ideal sharing city does not exist anywhere right now, but the building blocks for that city exist; they are just all over the world.

What is really encouraging — and why is one of my favorite policies in the book — is that since 2000 this trend has completely flipped. Between 2000 and 2015, 235 cities have taken back their water. The most notable example is Paris. In 2008 the city council voted against renewing the contract it had with Suez and Veolia and spent the next two years putting in place their management system. By 2010, the first year it operated, the city saved [$43 million] and reduced by 8 percent the cost for the population.

Another one of my favorites is the idea of the "zero waste party pack." Cities have started to take this on as well. The city of Palo Alto, California, for example, has 22 party-packs distributed throughout the city.

And finally, I would say Spacehive, a civic crowdfunding initiative in the U.K. In their first five years, it has raised [$9.44 million] for 306 projects, and many of these projects have been getting support directly from the mayor of London. His office has pledged [$1.13 million] towards these community-proposed projects. It was basically a pound-for-pound match against the [$1.27 million] that had been raised. So citizen proposals getting support and being enabled by the local government works. Most of the times we hear about the public-private partnerships, and I see this as a public-commons partnership. 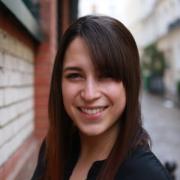 See all by Fernanda Marin