This year marks the first annual general meeting (AGM) season since the flurry of investor commitments to climate action and stewardship in line with the goals of the Paris Agreement. AGMs, yearly meetings of a company’s shareholders and its board of directors, provide an opportunity for shareholders to vote on certain topics, raise questions and challenge a company’s strategy and direction. Activist investors — and increasingly more mainstream investors — have used AGMs to raise climate resolutions, ranging from calls for greater transparency and climate-related disclosure to demands for companies to set climate-aligned emissions reduction targets.

Shareholder engagement is one of the main tools investors have to influence the real economy. It has gained traction with the rise of shareholder initiatives such as Climate Action 100+ and is often presented as an alternative to the blunter instrument of divestment. How an investor engages on climate issues during AGM season is also one of the most transparent ways it can demonstrate whether it’s making good on its promises of greater climate stewardship.

With the 2020 AGM season coming to a close at the end of June, we took stock of this year’s resolutions — and whether investors are walking the walk after announcing their climate ambitions. The good news is that, despite challenges in going virtual this AGM season, shareholder action on climate change is as strong as ever. Here, we look at three positive developments this year and what we hope to see in future AGMs.

Shareholder engagement is one of the main tools investors have to influence the real economy.

By far, most climate resolutions to date have prompted companies to disclose the risks and opportunities that climate change may pose to their business (see the exhibit below) — a reasonable request given that investors need this information to make investment decisions. While these efforts continue, this year also has seen an uptick in investors asking companies to disclose their lobbying practices.

Asking companies to report their lobbying goes beyond the "standard disclosure" recommendations and shows a growing recognition of the reputational risks posed by climate laggards. In a major win, a resolution submitted to Chevron passed with a majority vote, requiring the energy company to disclose how its lobbying aligns with the climate goals set out in the Paris Agreement.

In addition to the usual oil and gas suspects subject to lobbying resolutions, investors also submitted proposals to major transportation companies such as General Motors, United Airlines and Delta. These proposals are coming at a time when corporate influence on climate-related transport regulations is growing more apparent: this year, automakers successfully lobbied for the rollback of fuel efficiency standards in the United States, while major airlines are proposing to "revisit" the sector’s emissions targets in light of COVID-related impacts on the sector.

2. From target-setting to climate-aligned strategies

Over the years, shareholders have moved beyond disclosure to asking companies to adopt climate targets, helping pressure several of the world’s most carbon-intensive companies to set net-zero emissions targets. While the swath of recent net-zero commitments from oil majors such as Shell, BP, Total and Repsol marks a significant leap for the industry, none of these targets are yet aligned with a 1.5 degrees Celsius emissions pathway.

"We’re seeing an increasing number of big polluters commit to net zero by 2050 but failing to underpin those commitments with short- or medium-term emissions reduction targets," said Jeanne Martin, a campaign manager with U.K.-based ShareAction. "The next step for investors is to ensure that commitments are backed up by credible transition plans."

Investors are already taking notice of this gap and are pushing companies to up their ambition. Resolutions submitted to Shell, Total and Norwegian oil and gas company Equinor called for companies to set "Paris-aligned" emissions targets as well as develop plans for meeting these targets. While none of these resolutions received majority support from shareholders, they demonstrate that vague long-term commitments no longer may be enough: investors are increasingly looking for substance, not just style.

While climate resolutions often are aimed at energy companies directly responsible for emissions themselves, one feature of the 2020 AGM season has been a focus on climate action at financial institutions.

As one example, JP Morgan Chase saw several high-profile climate-oriented shareholder actions leading up to its AGM in late May. In one, a group of public pension funds led by New York City Comptroller Scott Stringer launched an effort to oust long-time JP Morgan Chase board member and former Exxon CEO Lee Raymond, due to his history of downplaying climate risk. In a sign of the strong support for that effort, the company announced its intent to replace Raymond as lead director by the end of the summer, before the measure could come to a vote.

We’re seeing an increasing number of big polluters commit to net zero by 2050 but failing to underpin those commitments with short- or medium-term emissions reduction targets.

Another resolution would have seen the bank boost disclosure of climate impacts arising from its lending activities. While the measure was defeated, its near-passage with 48.6 percent of votes sends a clear signal to management that a broad coalition of investors is deeply concerned about JPM’s climate record.

The 2020 trend of shareholder action on climate also resulted in the first climate change resolution sent to a publicly traded company in Japan. A group of shareholders in Mizuho Financial Group, the third-largest bank in Japan and a major lender to coal plants, served the company with a resolution calling for a plan and corporate target to better align business practices with the Paris Agreement.

Mizuho responded by announcing that it will stop financing new coal power plants and end all loans to such projects by 2050. In the United Kingdom, investor activists ShareAction led a resolution that would have seen Barclays halt financing to energy and utility companies that are not aligned with the Paris Agreement — the first of its kind filed with a European bank. Barclays ultimately developed its own management-backed resolution aimed at achieving net-zero portfolio emissions by 2050, approved with 99 percent shareholder support.

What’s noteworthy is that JPM, Barclays and Mizuho are all in the top 10 banks globally for fossil fuel financing. While this year’s resolutions were met with mixed success, increasing support for more comprehensive climate policies may lead to more proactive action, and likely are a sign of increased action from investors at other large banks.

Looking forward: What we’d like to see in future AGMs

This year’s continued and growing support for climate-oriented resolutions is a welcome sign that investors remain focused on climate action, even in the face of major economic disruption from the COVID-19 crisis. The trends we outline above — scrutiny of corporate influence on climate policy, an increasing willingness to hold companies accountable to more granular targets in line with Paris goals, and shareholder engagement beyond energy supply sectors, such as transport and financials — are promising signs that engagement is continuing to evolve and mature.

Climate change is a real threat to the economy.

Going forward, we hope to see shareholder climate action continue to move toward the mainstream. While support for resolutions has increased from 16 to 23 percent since 2019 and nearly 40 percent of resolutions this year were withdrawn due to a company commitment prior to going to vote, many still don’t receive enough votes to pass. That has to change.

Greater engagement from large asset managers could go a long way toward boosting support, and would be consistent with recent commitments from major asset management players such as BlackRock. As noted by Rob Berridge, director of shareholder engagement at Ceres, the three largest asset managers — BlackRock, Vanguard and State Street — sometimes can own 20 to 25 percent of a company, giving them an outsized influence on voting outcomes.

Berridge said they should increasingly have an incentive to put their voting power to work. "Climate change is a real threat to the economy. When you’re a widely diversified, long-term investor, you’d want to address systemic risks like climate change. And engagement is really the only way for you to manage risk within an index fund — a product category these firms dominate."

Ultimately, the financial sector can promote decarbonization in the real economy by directly influencing corporate strategy via shareholding, and by shaping access to and cost of capital. Strong engagement in shareholder resolutions and strong signals about the importance of emissions impacts in placing capital are an encouraging sign of the financial sector’s growing interest in and action on fighting climate change. 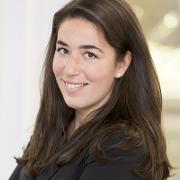 See all by Tyeler Matsuo