The sustainability journey for Shearer's Foods Inc. began about five years ago when CEO and co-founder Bob Shearer took a short trip to Cleveland to hear General Electric CEO Jeffrey Immelt speak at a business gathering.

"He was talking about green and sustainability and I thought, my gosh, I can buy into everything he has to say," said Shearer.

What followed was an ambitious program of environmental goal-setting and performance that has led to a sheaf of awards. The company achieved a milestone this summer by attaining LEED-Platinum certification for its new plant in Massillon, Ohio.

Shearer's is the only snack food manufacturer thus far to earn certification at the highest level possible in the Leadership in Energy and Environmental Design rating and assessment system developed by the U.S. Green Building Council.

The company is holding a roundtable discussion about its Millennium Manufacturing Facility today at Kent State University and conducting a ribbon-cutting ceremony tomorrow at the new factory. GreenerBuildings.com Executive Editor Rob Watson, the "Founding Father of LEED," leads the talk today and will participate in Friday's event as well. 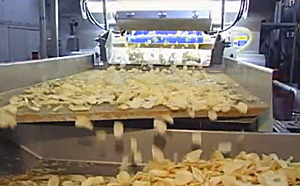 Shearer, whose early duties for the firm included selling and delivering products, now oversees a $350 million business. Besides the new plant in Massillon, the company has five other facilities -- in Brewster, Ohio, where the firm is headquartered, Oregon, Pennsylvania, Texas and Virginia.

Inspired by Immelt, Shearer enlisted his firm in the EPA's Energy Star Partnership Program in 2006, one of the company's early steps in establishing its sustainability campaign.

Two years ago, when the firm's leaders were contemplating a new plant, they decided to build it green from the ground up, said Shearer. Aspirations aside, no one thought a LEED-Platinum rating would result.

"At the time we set out to build the new plant, [LEED-]Gold would have been a stretch," said Scott Weyandt, the head of sustainability for Shearer's Foods.

"The levels of the bars we had to achieve for LEED are extreme, which is why so many manufacturers back away from it," said Weyandt.

Indeed, in an effort to encourage manufacturers to reduce energy use, the EPA's Energy Star Program established a challenge for industry this year. Participating firms strive to reduce energy consumption by at least 10 percent over no more than a five-year period. Thirty firms signed up.

This spring, Shearer's plant in Lubbock, Texas, was one of just nine firms recognized in the launch of the "Energy Star Challenge for Industry." The factory cut consumption by 15 percent in 12 months.

By then, the first phase of the Massillon plant -- the roughly 47,000-square-foot facility being celebrated this week -- was complete. Operations were beginning to go on line. And Shearer's leaders and design team, who had decided to make an all-out effort for green building certification, were waiting to see if the innovations they put into the new building would pay off with more than LEED-Gold.

In fact, the new plant exceeds energy-related design requirements by more than twofold, according to the company.

The facility reduces overall energy use (consumption of gas and electricity) by 30 percent per pound of production.

Here are some of the more striking green elements at the factory that make the energy savings possible: 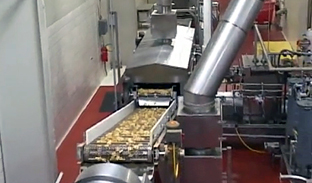 A high-efficiency infrared tortilla chip manufacturing line -- an industry first -- incorporates cooking processes as well as equipment that were redesigned, and in some cases specially developed, to save energy and water:


Shearer's developed an advance heat recovery system in collaboration with PSI Engineering of Fremont, Ohio, that captures almost all the waste energy from the oven and fryer stacks. The recovered energy will be used to heat the building in cool seasons, reducing the building heat load that otherwise would be supplied by natural gas by about 90 percent. During warmer seasons, the recovered energy will preheat the water used to cook corn and produce hot water for a sanitation skid -- resulting in a 22 percent energy savings.

All told, the energy savings enable the facility to reduce greenhouse gas emissions by more than 1,066 metric tons of CO2 equivalents annually.

The facility also cuts water consumption by 40 percent with its low-water corn cooking process and uses low-flow fixtures in all restrooms. A rainwater harvesting system yields an additional water savings of nearly 21 percent, which amounts to the filtering and reuse of more than 17,000 gallons each month.

Also, the Millennium facility was built with:

The groundwork for the company's second phase of construction at the Massillon site is already underway. A nearly 65,000-square-foot expansion is expected to be complete in January 2011, said Shearer (pictured below), who has set his sights on LEED certification for all the firm's facilities.

"In manufacturing, we happen to use a lot of natural resources," said Shearer in a video of the new plant that's posted on YouTube. "I think it's everybody's duty and responsibility to preserve what we have. It just comes with the territory."

For existing sites, the company's environmental strategies include:

Shearer believes his company's Millennium Manufacturing Facility and its other sustainability efforts can serve as templates for other industries in the region. Which is the reason for the roundtable discussion today at Kent State.

"We're all in it together," Shearer is fond of saying -- a sentiment the company has placed on a banner.

Kim Schumacher, the president of Schumacher Construction, which built the Massillon plant, agrees. Green building is "just catching on in our county," he said. The Shearer factory is only the second LEED-certified project in the county, and it was Schumacher's first.

"It went great, it really did," said Schumacher, who is also participating in the roundtable today. "We made sure we had the right people involved. And I went and got my LEED AP -- I thought it was the right thing to do."