Excerpt from "AUTONOMY: The Quest to Build the Driverless Car — And How It Will Reshape Our World," by Lawrence D. Burns and Christopher Shulgan. Copyright 2018 by Lawrence D. Burns. Excerpted by permission of Ecco, an imprint of HarperCollins Publishers.

The way we get around is changing. For the first time in 130 years, we’re in the midst of a major transformation in automobile transportation. In contrast to the personally owned, gasoline-powered, human-driven vehicles that have dominated the last century, we’re transitioning to mobility services based on electric-powered and driverless vehicles, paid for by trip or through subscriptions. 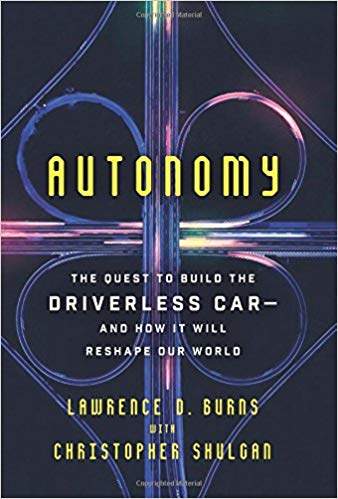 What does this mean? Soon, many of us will no longer need to own or drive a car. Instead, we will rely on services that safely and conveniently use autonomous vehicles to take us where we want to go. The providers will manage every aspect of our transportation experiences, from vehicle parking to cleaning and maintenance to recharging. The hassles of car ownership will be eliminated. No longer will we need to shop for, finance and insure a car, or spend our time driving, parking or pumping gas. Traffic will be less of a headache. And we will be able to choose between riding in shared vehicles that also serve others or paying more to have an exclusive autonomous "valet" that not only takes us door to door when we want, but also can be dispatched to run errands or transport family and friends.

Summoning a ride will happen with the touch of an app. The vehicle that arrives won’t have a steering wheel or gas and brake pedals. Most trips will happen in electric vehicles tailored to comfortably seat two people, since most trips we make happen solo or with just one other person. All this — and transportation is going to cost us just a fraction of what it ever did before.

This book chronicles the origins of the coming transformation. The changes I describe use current technology to solve the transportation problem in a different way. We don’t often consider transportation a problem, but it is. Without giving it much thought, every day, every one of us considers the dilemma of how to get where we want to go when we want to be there. We come up with various solutions. For more than a century, the predominant solution in North America has been the personally owned, gas-powered, human-operated automobile. But that particular answer has caused numerous issues.

Without giving it much thought, every day, every one of us considers the dilemma of how to get where we want to go when we want to be there.

Today in the United States, 212 million licensed drivers own 252 million light-duty vehicles and drive 3.2 trillion miles a year, burning more than 180 billion gallons of fuel as they do. The emissions of cars and trucks amount to a fifth of the greenhouse gases created in the United States. And the distance we travel by automobile is growing, with the number of vehicle miles traveled increasing about 50 percent from 1990 to 2016.

We’ve structured our transportation in such a manner that most working adults believe that owning and maintaining their own vehicles is integral to their full participation in contemporary society. Yet, American automobiles sit unused about 95 percent of the time.

When we do drive those vehicles, they’re terribly inefficient. More than 95 percent of the automobiles sold in the United States today are propelled by internal combustion engines that use gasoline. Less than 30 percent of the energy from the gasoline you put in your car is used to move it down the road. The rest of the energy is wasted as heat and sound, or used to power accessories like headlights, radios and air conditioners. Because typical vehicles weigh around 3,000 pounds and typical people weigh around 150 pounds, only about 5 percent of the gasoline energy translated into motion is used to move the driver, which amounts to just 1.5 percent of the total energy in gasoline.

Less than 30 percent of the energy from the gasoline you put in your car is used to move it down the road. The rest of the energy is wasted as heat and sound, or used to power accessories.

Such inefficiencies arise because we purchase automobiles that are massively overbuilt for the purposes we most frequently use them. Waymo CEO John Krafcik calls this the "occasional-use imperative." Think about it. In the United States, 85 percent of personal travel is by automobile. Average occupancy of 1.7 people per mile falls to just 1.1 in vehicles conducting work commutes. Average speed in congested cities can run as low as 12 mph. And yet the cars, trucks and SUVs we drive have enough room for at least five adults, with engines so powerful many can travel at 120 mph and beyond. "The mix of cars on our nation’s roadways is completely messed up," Krafcik observes.

These overbuilt vehicles are dangerous, because they’re heavy. The World Health Organization estimates that auto crashes around the world kill 1.3 million people a year. In 2016 alone, 37,461 Americans were killed in auto crashes, contributing to make unintentional injuries the leading cause of death for Americans in the first half of life.

Using your vehicles just 5 percent of the time means that you have to figure out a place to store them the other 95 percent. So, you need to devote a good chunk of your home to a garage (and driveway), and not only that — where you work has to reserve space for your car, too. As does your favorite shopping mall, your dentist’s office, the stadium for your favorite sports team, your city’s streets — the list goes on. So we pave over big swaths of valuable real estate in our cities, creating asphalt heat islands that elevate urban temperatures and may contribute to climate change.

All of which is why Morgan Stanley financial analyst Adam Jonas calls the automobile "the world’s most underutilized asset" and the auto industry "the most disruptable business on earth." It’s why Pulitzer Prize-winning journalist Edward Humes says, "In almost every way imaginable, the car, as it is deployed and used today, is insane."

5 steps to an urban transportation revolution