Shuffling the deck: A resilience plan for Atlantic City

Reimagining a business around the concepts of sustainability and resilience in the face of unexpected shocks — extreme weather, resource scarcity, social unrest — is already a tall order.

But architecture and design firm Perkins+Will hopes to achieve this vision at city scale in a coastal locale known for cultural and financial excess, along with a vulnerability to storm surges: Atlantic City.

To help remake the economically ailing resort town into a beacon for change as a “worldwide center for research on resiliency,” Perkins+Will has devised a plan to turn Atlantic City into a “living laboratory.” The focus of the plan will be on protecting against rising sea levels, disaster preparation and habitat diversity.

“Since Atlantic City is an intact city with built structures, civic systems and a living, breathing community, it provides a unique opportunity to research and test in place while all of this is happening around in ‘real life’ scenarios,” Daniel Windsor, senior urban designer and senior associate at Perkins+Will, told GreenBiz. “This allows for innovative solutions to real issues to be integrated into to the existing framework of an urban place.”

The emphasis on translating high-level research into localized resilience strategies comes at a time of increased emphasis on urban sustainability — a crucial issue given both expected population growth in cities and the range of shocks that these environments can experience, from earthquakes to turmoil related to income inequality.

Perhaps the most widely recognized organization working to bolster urban resilience is Rockefeller Foundation offshoot 100 Resilient Cities. Atlantic City is not among the locations participating in the global effort to better staff up and plan for resilience, although neighboring New York City is.

For the new experiment in Atlantic City, which has not yet been given the green light by the city, Perkins+Will proposes turning to the city's most famous tenants: large, power-hungry casinos, which will be re-purposed as research institutions.

Under the plan devised by the architecture firm, each casino will be taken over by research institutes to use for office space, labs, housing and other testing. Larger casinos and conference spaces will be converted into testing facilities that require specialized staging and equipment: 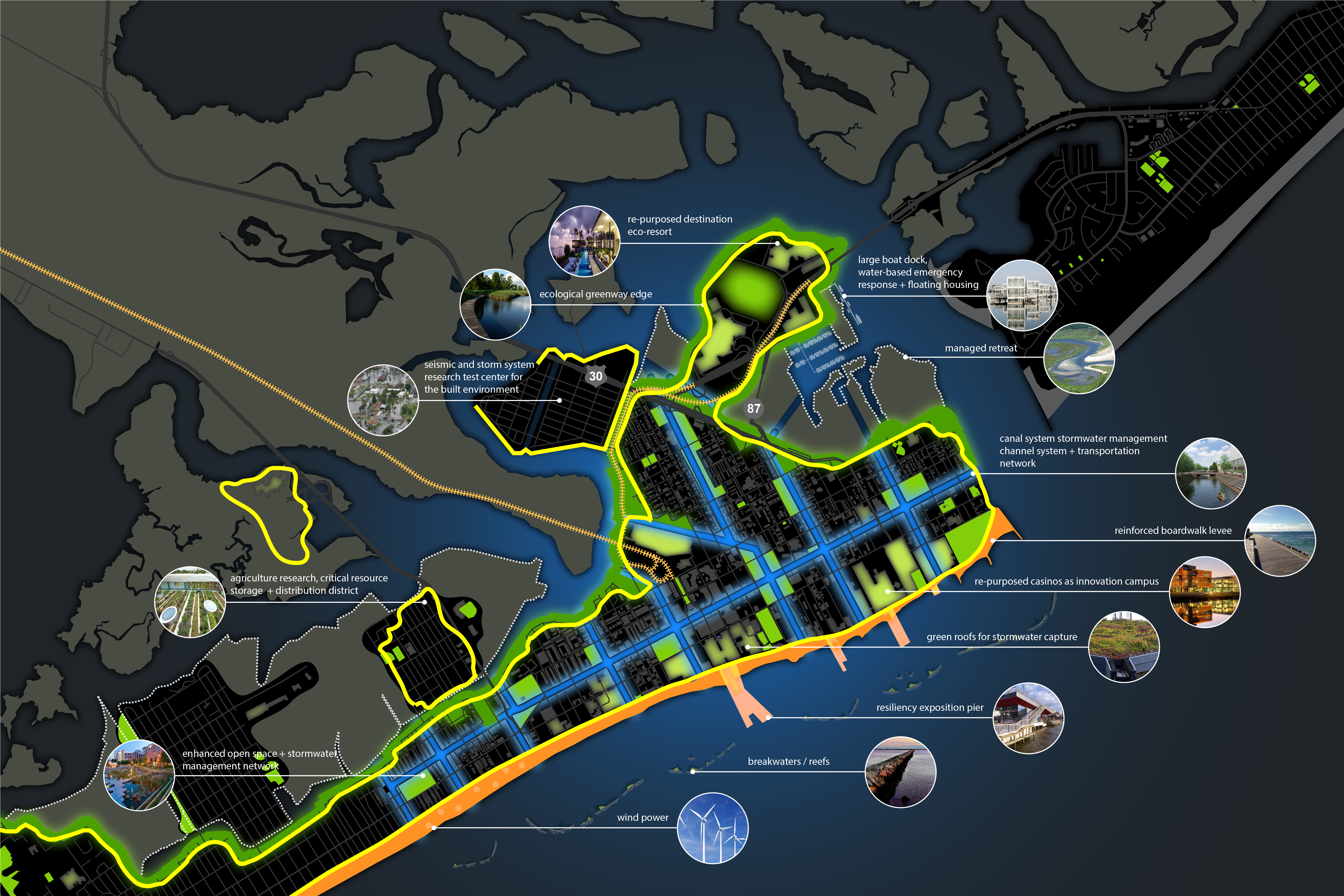 “The idea here is to bring the brightest and most innovative thinkers to the area where they can share, research and train to find solutions,” Windsor said. “The newest technologies and techniques will be tried here to see what works and what doesn’t.”

He added that the economic development potential for a city know for boom-and-bust cycles also could be appealing.

“This also creates an opportunity for workforce development in resiliency strategies in both rapid job attachment, as well as longer term business development,” Windsor said.

Changing the storied culture of Atlantic City won’t be easy, even if it is only four square miles — roughly the size of a medium college campus. The city has created a brand and a community around casinos and entertainment, which is no longer sustainable economically or environmentally.

By placing most of its chips on a single industry, entertainment and gambling, the resort city long has endured a vicious boom-and-bust cycle.

As depicted by the popular period drama “Boardwalk Empire,” Atlantic City’s golden age took place during the Prohibition era of the 1920s, when it became a mecca for tourists looking to defy the 18th Amendment. The city’s government turned a blind eye while restaurants and nightclubs peddled booze in their back rooms. But the decade of decadence left the resort city with a throbbing socioeconomic hangover soon after Prohibition’s repeal. Poverty, crime, corruption and widespread economic decay tormented Atlantic City throughout the rest of the 20th century.

Despite a slight economic boost following the legalization of gambling in the late 1970s, the city never regained the glory of its heyday. Atlantic City has limped along ever since.

And then came Hurricane Sandy.

Although initial media reports claimed the city’s historic boardwalk was destroyed by the 2012 superstorm, these turned out to be false. In fact, Atlantic City weathered the storm fairly well, sustaining minimal physical damage and reopening for business within a week.

But the same can’t be said about the city’s public image. Atlantic City has struggled to expunge perceptions of its being ransacked by Sandy, which discourages tourism.

Vulnerable to coastal storm surges and rising sea levels, Atlantic City is haunted by the specter of another storm — and Sandy’s successor may not be as merciful.

Moving from talk to walk

The plan to transform Atlantic City by focusing on resilience is still an internal design charrette for Perkins+Will, but the firm hopes soon to approach the Atlantic City government to find ways to make it a reality.

Although the plan isn’t a panacea to all of Atlantic City’s economic and environmental woes, it could be an opportunity to align local concerns and challenges with a global need for capacity building.

The starting point for breaking free from the past and moving toward a more sustainable and resilient future could lie with inspiring a culture shift through productive conversation and good ideas.

“No one is denying the tremendous amount of work to make something like this happen — the political, economic, community and institutional buy-in and due diligence is insurmountable and by no means do we pretend to have the answers,” Windsor said. “But what we are hoping to do is build a network of excited and smart people and organizations to start that shift.”

A center for civic engagement

If given the go ahead, the Perkins+Will plan also calls for turning the Atlantic City Convention Center into a “civic-scale academy” for public officials and citizens.

Global experts will lead workshops on varying techniques that have been successfully used elsewhere, Perkins+Will said. This environment also will be used to showcase new products and techniques for visiting civic leaders.

“We believe that using the entire city as a means for capacity building, investigation and training could be very powerful,” Windsor said. “Beyond using the physical space of Atlantic City, the plan sets out to focus on community resiliency and help citizens be part of the recovery.”

The plan looks to create neighborhood networks and empower residents to be part of the support system and innovators for refining resiliency tools — another commonality with the work of 100 Resilient Cities and others, which maintain that buy-in from a range of stakeholders is crucial for any real progress.

“We know that communities that showed strong networks and personal investment bounce back the quickest and that’s what we want to research and foster here,” Windsor said. “That means citizens could be involved in a range of capacity-building innovations from creating community awareness and preparedness campaigns to being ‘extras’ in training simulations to pitching ideas at community forums.”

As might be expected from a design firm, one of the most unique provisions of the plan is a creative way to address climate vulnerabilities.

Specifically, Perkins+Will wants to draw a “line” through Atlantic City to symbolize the rising sea levels, the pending risks that scientists and civic leaders will have to fight for years to come.

The line would start as an adapted boardwalk and weaves its way through Atlantic City, traversing buildings, public art displays, walkways, open space and infrastructure. It’s purpose is to remind people of dire challenges and the importance of the new Atlantic City, Perkins+Will said.

What it takes to be a corporate climate leader

How Salesforce, Google, others use tech as a ‘force multiplier’ in sustainability innovation