"We are starting to create the ecological U-turn that David Brower talked about, decades ago. On coal, it's dramatic. We've seen a halt to the coal rush."

"Primarily because of regulations (from) the Obama administration, we can now project a future where our oil consumption will decline."

"It's not sufficient to address the problem, but it's a positive trend." 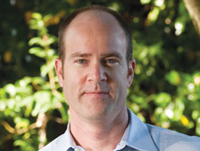 So says Michael Brune, executive director of the Sierra Club. [David Brower, who was made famous in John McPhee's Encounters with the Archdruid, was one of his predecessors.] Others fret that the environmental movement is on the defensive these days. Mike, an optimistic, sees progress.

Indeed, Mike argues that the effort by Republicans in the House to roll back a slew of environmental regulations as a sign that the enviros are winning.

"Republicans in Congress and their corporate benefactors are worried about the threat to the status quo in the energy industry," he says. "That's the reason this is happening. We're making progress."

Mike, who is 40, became the top executive at the Sierra Club early last year. Before that, he led the Rainforest Action Network, which I wrote about back in 2004 in FORTUNE. [See The Mosquito in the Tent] Earlier, he worked at Greenpeace, for a time as a door-to-door canvasser -- a job that all but requires anyone who does it to see the glass as half full. Mike and I caught up the other day at the Society of Environmental Journalists conference in Miami.

The Sierra Club has nearly 600 staffers, a budget of nearly $100 million, about 625,000 paid members and another 1.4 million supporters. Stopping new coal plants and shutting down existing ones has become the club's top priority. In a coup, Mayor Michael Bloomberg of New York gave the club a $50-million, four-year grant to support its anti-coal campaign. (See Mike Bloomberg takes on coal.)

Plans for more than 150 new coal plants have been dropped, and a dozen or so more are still being fought, Mike said. In large part, that's because demand for electricity has slowed, federal pollution rules make upgrading coal plants more expensive and natural gas has become cheaper and more abundant. But environmental opposition to coal has played a key role, too.

The club's Beyond Coal campaign now aims to lock in the shutdown of about one-third of the coal-generating capacity that's left by the end of 2015. (Here are details.) Again, federal clean air act rules will force utilities to phase out dirtier coal plants, as will cheaper gas. The activists will work to create political pressure to replace coal power with clean energy like wind and solar, not just natural gas.

We're going as fast as we can to replace coal with clean energy in every state across the country. It's the top priority for Sierra Club, and the largest project that the Sierra Club has done in 20 years.

This campaign won't solve the climate crisis, as Mike acknowledges, but it's important for several reasons.

Second, the Beyond Coal campaign can generate environmental victories at the state and local level. Cap-and-trade is terribly complicated but "people can see that there's this smokestack over there and it's making us sick," Mike says.

Third, the campaign could become one of the building blocks of a more powerful environmental movement. While most people want clean air and water, and most support action to curb climate change, most remain passive. "We need people to engage," Mike says. "We're going toe to toe with some of the biggest polluters in the country."

This is why, he says, the Occupy Wall Street protests are encouraging, as is next month's protest at the White House to stop the Keystone XL pipeline:

Arguably, the biggest challenge in the environment movement is to show people that they'll get a return on their investment of their time or their energy or their dollars or their passion -- to not despair about the future of our country.