The tech sector has stepped up its fight against climate change since COP21 last year. From the Bill Gates-led Breakthrough Energy Coalition pledging more than $1 billion towards the transition to clean energy, to Google purchasing nearly 2.5 gigawatts of renewable energy, tech companies have made bold commitments.

As innovation leaders, however, much of Silicon Valley still lags on championing comprehensive sustainability strategies. A new report by the Centre for Sustainability and Excellence (CSE) sheds light on the big issue at play: Most large companies are compliant but aren’t driving a thorough, transparent approach to sustainability.

The report, "Sustainability Trends in Silicon Valley," claims to be the first systematic research of its kind about tech giants headquartered in Silicon Valley. CSE examined 100 public and private companies, all either small-to-medium sized businesses with up to 500 employees or large companies with up to 100,000 workers, about their sustainability reporting strategies — if any.

From tech innovators to environmental stewards

From the outset, things look good: 61 percent of surveyed companies (including Apple, Adobe, eBay, Oracle and other well-known names) have a sustainability professional on staff. The number drops slightly for large companies, of which 59 percent have a full-time sustainability officer.

"While true that large companies might have greater resources, they also have more departments which might have managers in charge of sustainability but not at the C-level," Rosalinda Sanquiche, executive manager of CSE North America, told GreenBiz. "All too often, responsibility for sustainability falls under department headings such as human resources, marketing, health and safety or stakeholder engagement because it is not yet seen as something that should exist throughout an organization." 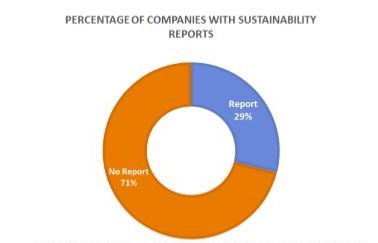 Smaller companies and startups also may "be more in tune" with the need to integrate sustainability practices from the start, while larger companies need to reorganize to accommodate a new role.

Overall, only 29 percent of companies surveyed produced a sustainability report anytime from 2013 until 2016. CSE only accounted for reports that are formatted clearly, leaving out strictly web-based reports that are produced solely for compliance, those featuring only quick facts or "large and vague goals."

Disclosure provides quantifiable metrics by which to judge a company’s intent and success. Stakeholders, investors and customers want to see numbers about investments, specific roles of those leading initiatives, and the expected benefits of these efforts. Showing progress and improvement — listed on a formal report — increases branding, credibility and engagement among socially responsible consumers and investors.

Overall, only 29 percent of companies produced a sustainability report anytime from 2013 until 2016.

Top of the charts

CSE chose the top 21 companies with comprehensive sustainability practices. These organizations were ranked by six focus areas of sustainability: 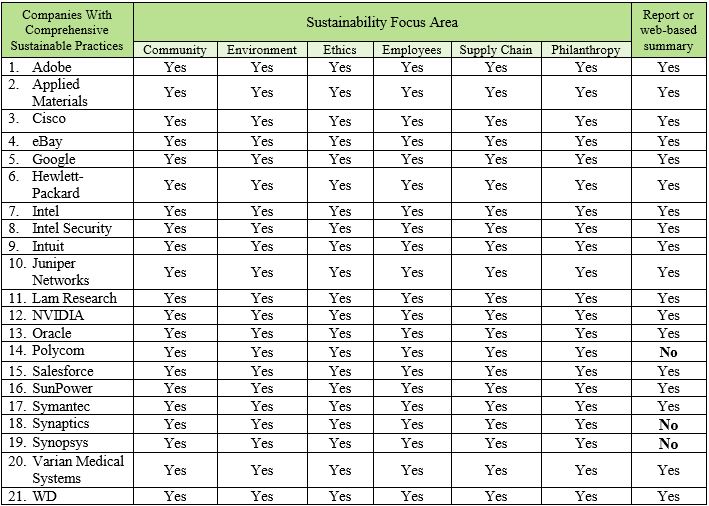 Of these — led by Adobe, Applied Materials, and Cisco — 86 percent have a sustainability report or web-based sustainability efforts. CSE noted that some famous tech names, such as LinkedIn and PayPal, did not make it on the list because "their sustainability efforts were either narrow or limited in a particular area." For example, LinkedIn focuses on ethical governance on its website, rather than on displaying compelling information about its sustainability strategy concerning the environment, community or supply chain.

Ethics was the leading category of practice focus (95 percent) among all surveyed tech companies, followed by supply chain (64 percent) and environment (63 percent). These outweighed community and employee welfare (both 51 percent) and philanthropy (32 percent). Computer networking, consumer electronics and telecommunications companies spent the most effort on environmental programs.

"We’ve seen trends in sustainability that focus on improved efficiency and green branding; an improved supply chain facilitates both of these," said Sanquiche. "Better suppliers often reduce costs. Using more socially responsible sourcing improves reputation. I don't believe there is ever just one motivation to make change. Closed-loop and circular economies have proven themselves to reduce costs, particularly long-term costs of waste disposal, transportation, litigation and energy use. If a company can say they've moved to a local supplier or one which pays fair wages or employs sustainable harvesting, so much the better for their own marketing efforts."

CSE noted that some famous tech names, such as LinkedIn and PayPal, did not make it on the list because 'their sustainability efforts were either narrow or limited in a particular area.'

The report delved into Adobe as having exemplary, visible sustainability strategy including both a report and web-based summary. The company tries to reduce waste through operational actions, recycling and product innovations. It has joined RE100 in its conservation efforts, as well as pledged to the White House’s American Business Act on Climate, for which they measure and manage their energy use, reduce energy demand and produce their energy on-site via renewables.

Nearly three-quarters of Adobe’s workspaces are LEED certified. Adobe focuses not only on sustainable corporate governance practices and compliance, but also that of its supply chain and on Adobe’s community impact.

Only 21 of 100 Silicon Valley giants had a well-rounded approach to sustainability, which will ensure their sustained long-term growth without having a negative impact on the surrounding world and the resources they need to survive. The CSE report urges further thought about the influence large companies have on their competitors, and the global market as a whole, when they do not focus on all aspects of sustainably creating value for stakeholders.

"The transparency of disclosure is scary for companies still in the old model. Business school still teaches competition over collaboration, protecting trade secrets and putting the best face on quarterly reports," said Sanquiche. "That's going to be a hard habit to break."