Could "snap, crackle and pop" take on a new meaning? Cereal giant Kellogg's has this week unveiled two new products that turn its waste cereals into beer.

The company teamed up with Salford-based Brewery Seven Bro7hers to turn surplus Coco Pops into "Sling it Stout" and excess Rice Krispies into "Cast Off Pale Ale."

The new beers are made from discarded grains created during the production process at the firm's Manchester factory. The grains were rejected for being overcooked, uncoated or discolored, creating an opportunity to upcycle them into new products.

"This activity is part of our new 'Better Days' commitments which aim to reduce our impact on the planet." 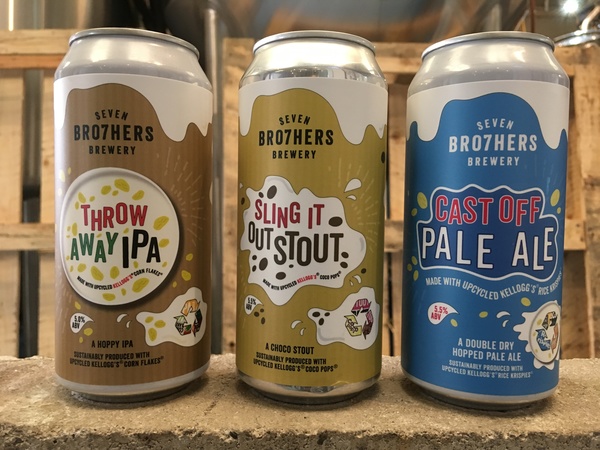 The innovations build on the Kellogg's Corn Flakes IPA, which is created using a similar process and was launched in November.

The two new beers aim to emulate the success of the IPA, which is said to have sparked strong customer interest since its launch. The Sling it Out Stout brew uses 80kg of Kellogg's Coco Pops to replace malted barley, with the cereal contributing a distinctive chocolatey taste, the firm said.

All three beers will be available to purchase from Seven Bro7hers website and Booths Country Stores, with ambitions to roll out to Ocado and Selfridges in the near future. The beers also will be sold on tap across Manchester.

The move comes just days after Kellogg's announced an update to its global sustainability targets, reiterating its commitment to its science-based emissions targets and setting new 2030 targets to support a million farmers and smallholders to deliver climate-smart farming, feed 375 million people through donations, and continue its work to reduce food waste, responsibly source ingredients and switch to sustainable packaging.

Ford and Porsche invest in electric vehicles for European market

See all by Toby Hill