This is the third of a three-part series. Check out Part 1, about how the team is using Life Cycle Assessment to make the operation fast and lean. Part 2 is our deep dive into the sustainability-focused partners helping Land Rover BAR break green-sports barriers, building a team to bring the America’s Cup to Great Britain for the first time.

"Winning isn’t everything, it’s the only thing!"

That quote has been an integral part of the legend of Vince Lombardi, coach of the National Football League’s Green Bay Packers during its 1960s dynasty — his teams won five championships, including Super Bowls I and II, from 1961 through 1968. It also has become symbolic of an attitude that pervades much of the sports world — winning über alles, no matter how you do it.

Sir Ben Ainslie would beg to differ with Lombardi.

Oh, Ainslie is driven to win as much as, if not more so than, anyone in world-class sailing. His record  attests to that: He’s the most successful sailor in Olympic history, winning medals at five consecutive Olympics (1996 to 2012), including gold at the last four; and he played a key part in Oracle Team USA’s stirring comeback to capture the 2013 America’s Cup.

Almost everyone with a conscience wants to be making a difference in this — they just need to know how to do it.

But to Ainslie, winning itself isn’t the only thing. His will to win is matched with the need to do so with purpose — and his purpose is to use his platform at the top of the sailing world to advocate for clean oceans and the climate change fight. We sat down with Ainslie to find out how and why he became one of the world’s foremost eco-athletes, the role Wendy Schmidt and 11th Hour Racing have played in bringing him and his team to the top of the green-sports pantheon and to understand his vision for bringing sustainability to the rest of the sailing world.

Lew Blaustein: Sir Ben, did you grow up an environmentalist or did you come to it as an adult?

Sir Ben Ainslie: Well, environmental science was one of my keener subjects in school and something I’ve been interested in since I was a kid. And then, with sailing, I was able to travel the world and to see the deteriorating condition of the oceans, seeing the damage that’s out there, especially in some places in which the environment is not as big a concern as it should be. And so the environment became an even bigger issue for me.

Blaustein: So how and when did you turn interest in and concern for the environment into action?

Ainslie: It was a progression rather than an "Aha!" bolt-of-lightning kind-of-thing.

Being from the United Kingdom, sustainability messaging in sport has been around for a while, especially at the London 2012 Olympic Games. So I was well aware. But it wasn’t until after the 2013 America’s Cup as I was putting the foundations for my own team in place, when I met Wendy Schmidt of the 11th Hour Project, parent of 11th Hour Racing, that sustainability — and doing something about it — became front and center for me.

I was able to travel the world and to see the deteriorating condition of the oceans.

Wendy really instilled in me the responsibility someone like myself in sport has, and the opportunity we had, in building a team from scratch, to do so with sustainability as a core principle, a core belief. In fact, those early conversations with Wendy informed how we approached building the team’s home base in Portsmouth to BREEAM (the British equivalent of the U.S. Green Building Council’s LEED) standards and pretty much everything we’ve done operationally since.

Just as important is how we try to encourage the guys we sail against — and athletes in other sports — to join us in the sustainable sport movement and make a difference.

Blaustein: I can see two sides to sharing your sustainability strategies and tactics with your competitors. On the one hand, it’s the right thing to do — spreading sustainable approaches is good for the environment and will engage more fans. On the other, however, you’re giving away a competitive advantage of sorts. By being more sustainable, you can save money, which you can then invest in other areas. And by using materials more wisely, perhaps you could have a lighter, faster boat, which would of course be an advantage. Have you thought of this?

Ainslie: You’re right, there are competing aspects at work here. But we, in the end, need to do the right thing by the environment and that is to share our sustainability efforts with our competitors. As to saving money, at the start, there’s an initial investment in sustainability, so we won’t see as much cost benefit upfront. Longer-term? Definitely, we’ll see a meaningful cost savings. Philosophically, we have to get the sustainability message out via our America’s Cup competitors.

Blaustein: How have your competitors reacted when you’ve shared this sustainability message?

Ainslie: Really well. Now, for the last 18 months, we’ve been about getting our own sustainability house in order, building the base to the BREEAM standards, using Life Cycle Assessment (LCA) to make our operations as environmentally friendly and smart as possible. Now we’ve started to push that out to the other teams. With the help of our sustainability manager, Susie Tomson, we’ve drafted a sustainability charter and we’re working with the teams to adopt that.

Blaustein: Are they doing so?

Ainslie: Some are moving fast; others, especially those newer teams that are just getting up and running, are lagging a bit. But every team has expressed support for what we’re doing and know that we, as America’s Cup teams, have to set the sustainability standards for the rest of the sport and thus make the oceans cleaner and more habitable.

Blaustein: So none of the America’s Cup teams are rejecting the need to be sustainable and clean up the oceans?

Ainslie: Absolutely not. And when we share the practices that won’t be very costly, yet make a big environmental difference, the other teams, especially the more established ones at the start, seem keen to have our support and make those changes.

Blaustein: For the 2017 America’s Cup, yours is the only team, I believe, that has a sustainability manager. Do you think that will change by 2021?

Ainslie: I think that’s correct. Right now, a team like Artemis Racing from Sweden doesn’t have a sustainability director, so they are looking to us, and to 11th Hour Racing, to help them change in a sustainable direction. And, especially at first, the changes aren’t that costly or technologically advanced.

Blaustein: Earlier, you mentioned how your meeting with Wendy Schmidt of 11th Hour Racing became sort of an "Aha!" moment for you in terms of starting you on this sustainability road. Talk to us about how that came to pass. 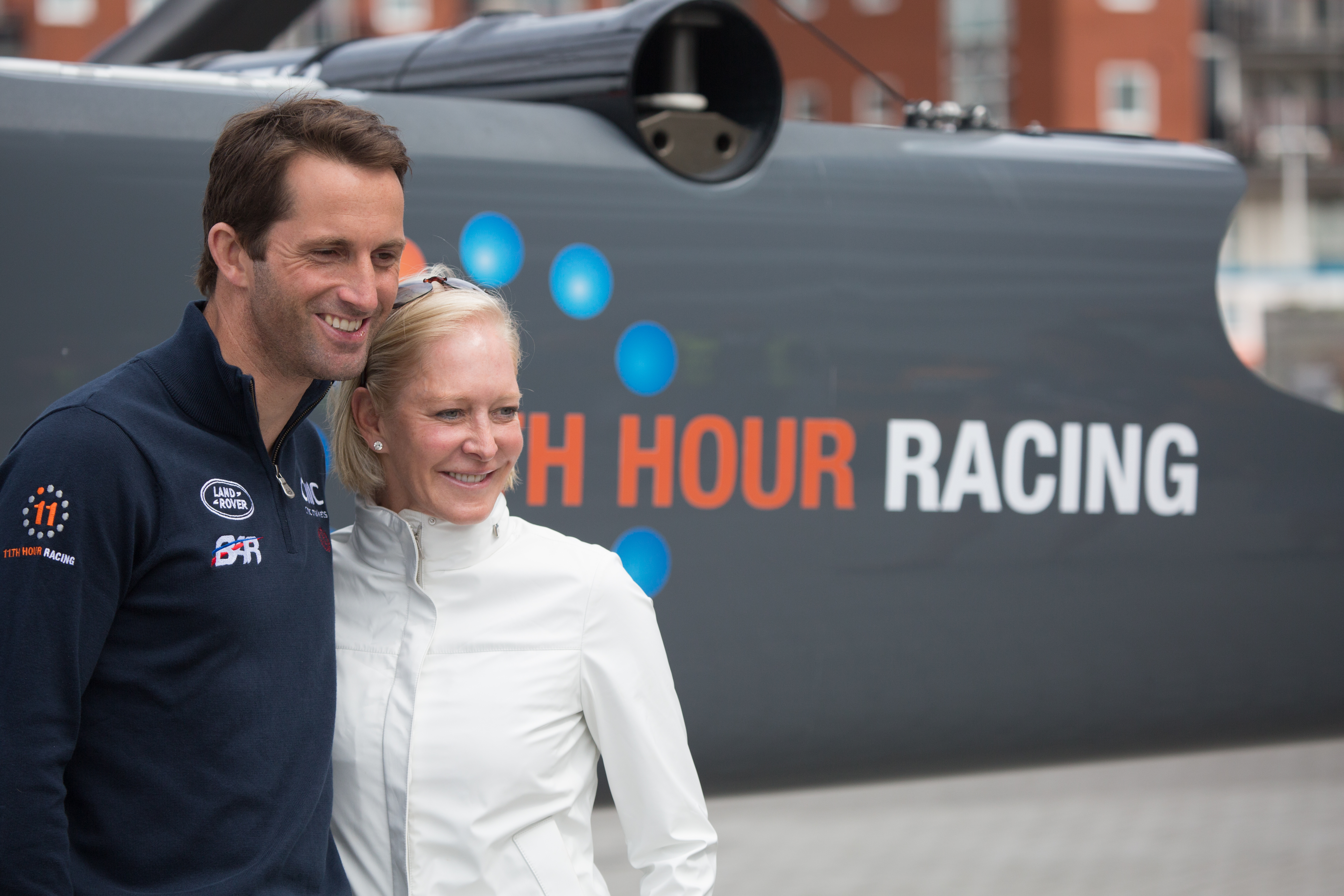 Ainslie: Well, we were introduced in 2014 by a friend in New York City after winning the America’s Cup — I was living there at the time with my then-girlfriend, now-wife. Wendy is an experienced sailor, had watched the America’s Cup and knew that I was looking to kick off a new British team. She impressed on me the opportunities I had with a completely new organization to pass on a sustainability message to our supporters and competitors and beyond. It was a really interesting conversation.

And so as I went about the work of building our team, our relationship with Wendy led to 11th Hour Racing becoming part of our team. They worked with Susie Tomson to implement the sustainability standards for the team, whether through our everyday operations, eliminating single-use plastics or with the base itself. So my relationship with Wendy and through her, with 11th Hour Racing has made a huge difference for us.

Blaustein: How did the team react to this sustainability initiative? I imagine it was something that was very different for many of them.

Ainslie: It took a certain amount of educating. What helped was that the team could see the financial benefits, short- and especially longer-term.

We, in the end, need to do the right thing by the environment and that is to share our sustainability efforts with our competitors.

Look, when you get down to it, almost everyone with a conscience wants to be making a difference in this — they just need to know how to do it. So bringing Susie on — she took on that educating role. And now all of our team is excited to make a difference — sustainability is at the heart of what we do.

Blaustein: Speaking of the "at the heart of what you do" — what ocean health issues are your top priorities?

Ainslie: Well, on a micro level, we have a cool oyster bed revival project underway at our home base. But, looking at the big picture, and from a personal perspective, given that we sail on the seas every day, pretty much, we’d like to make a big difference eliminating plastics in the oceans. We’re eliminating single-use plastics with the team and are getting that message out to the fans. Blaustein: And I imagine you’re getting the message of the team’s state-of-the-art, home base, built to BREEAM standards, in Portsmouth out to your supporters. How involved were you in the design? What has been the reaction? What do you like most about it?

Ainslie: When we decided to build our own base, we could’ve gone a number of different ways in terms of build quality. With sustainability at the heart of everything we do, and with 11th Hour Racing alongside us, we really had to build to the highest standards — BREEAM standards for sustainable buildings and ISO 20121 for sustainable events.

I believe we are the only sports team to have ISO 20121 across all their activities. This required extra effort in the design and construction stages. It was well worth it as now we have this fantastic base that showcases what we’re about and our sustainability objectives.

Probably the neatest thing about the base is the wrap — it makes it look pretty cool and it also helps the building retain heat in the winter and keep cooler in summer. And the sustainability of the base helps show our supporters, our partners, our competitors and also the media — who’ve been quite impressed — that we’re in this for the long haul.

Blaustein: Another sustainability initiative with which you are involved is 100% Sport, along with your corporate partner BT. You were the first athlete to make the #go100percent pledge — to have your team base’s electricity generated from 100 percent renewable sources. How did that come about?

Ainslie: I’ve had a long relationship with the folks at BT and BT Sport, and when they came to me with the opportunity to be the first athlete to take the 100% Sport pledge, I was honored. And given what we’re doing at the base and operationally, it was a no-brainer to say yes.

Blaustein: Are you trying to help 100% Sport recruit other athletes?

Ainslie: Yes, we’re working on getting some of the other America’s Cup teams to get them to sign on — and as we get closer to the 2017 America’s Cup next year, with the increased interest and exposure, I do think we’ll see other teams become part of the 100% Sport movement and also commit to the sustainability charter I mentioned earlier.

Blaustein: That’s good to hear. In fact I’m confident the "Thou Shalt Not Use Single Use Plastics" will become a watchword for sailing teams and, even more important, their fans.