This story was first featured on Yale Environment 360.

Mlkseveck Mushi sat on the porch of his brick house on the flanks of Mount Kilimanjaro in Tanzania in October, talking about the prospects for his increasingly beleaguered coffee farm. Mushi owns 2,000 coffee trees, planted among bananas and beans on several acres of land that he inherited from his father. He’s also secretary of Okaseni, a cooperative of 80 small coffee farms around Kilimanjaro.

Alternating between English and Swahili, Mushi recalled that the region’s climate was once ideal for growing coffee, with stable temperatures hovering around 70 degrees and dependable rainfall. But in recent decades, he said, the climate has become increasingly inhospitable. Temperatures are rising, and the rains often come too late to turn the delicate white flowers into cherries, the fruit of the coffee tree. Instead, these days the flowers often wilt, dooming that season’s crop.

The wet spell that Tanzanians call "the short rains" was due weeks previously, but had failed to show. "We don’t have any up till now, as you see," he said, turning his eyes skyward. Unless the rains came soon, he feared losing the harvest income he relies on to support his family. Some of his trees might even die.

Temperatures are rising, and the rains often come too late to turn the delicate white flowers into cherries, the fruit of the coffee tree.

Mushi’s plight is increasingly common in the world’s coffee-growing regions, which are largely centered in the foothills of mountain ranges in the tropics, such as the Andes. The highlands of Tanzania, Kenya and Ethiopia also have been blessed with the perfect climate to produce large amounts of coffee. But a rapidly changing climate is threatening these coffee-producing areas in scores of countries, where millions of people rely on coffee as a major source of income.

Newly published research suggests that before long, coffee farmers on the slopes of Kilimanjaro and in many other regions will not be able to grow coffee economically. In Tanzania, for example, nighttime warming has depressed productivity by about 50 percent since 1960, according to Alessandro Craparo, a Ph.D. student at the University of Witwatersrand in Johannesburg and an expert on Tanzanian coffee production. Peter Läderach, a tropical agriculture expert at the International Center for Tropical Agriculture, said many of the roughly 70 other coffee-growing countries also will suffer severe impacts from rising temperatures, changing precipitation patterns and insect outbreaks.

"The areas that are suitable to produce coffee are going to shrink drastically," he said, echoing the results of a 2014 paper he co-authored. That article forecast a global decline of 50 percent in the amount of land suitable for growing coffee by 2050.

Scientists who study the impact of climate change on the world’s coffee crop say agronomists urgently must research which of the world’s roughly 125 known coffee species might be able to survive in a hotter world. At this point, it appears that two of the most commonly planted coffee species, Arabica and Robusta, are unlikely to fare well as global temperatures continue to rise. 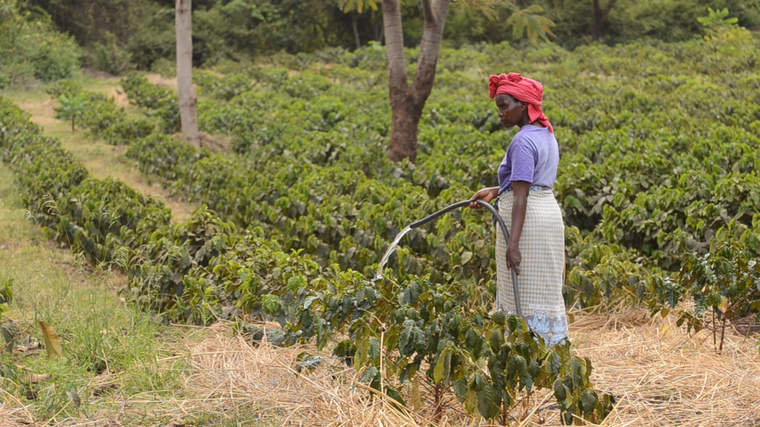 Coffee is the world’s second-most valuable commodity in trade, after oil. Hundreds of millions of people drink a total of more than 2 billion cups of brew made from the bitter bean every day. About 20 to 25 million family famers earn part of their income growing coffee, according to the World Bank.

Tanzania is a relatively small player in coffee commerce — 13th in bags shipped — but coffee plays an important role in the nation’s tiny economy. The bean (actually the seed of the cherry) is Tanzania’s third-largest agricultural export, after tobacco and cashews, generating $162 million a year.

Coffee trees are highly sensitive to temperature and rainfall patterns. Arabica coffee — the most lucrative species, making up 70 percent of Tanzania’s production and accounting for about 60 percent of global production — thrives only where temperature fluctuations are small, with an average of about 64 to 73 degrees annually. Arabica needs generous rainfall (or the equivalent in irrigation water) — about five feet a year. And it requires two to four months of dry weather between wet periods. Few places on earth meet these needs.

Arabica coffee thrives only where average temperatures fluctuate from 64 to 70 degrees annually.

According to a 2015 paper in the journal Agricultural and Forest Meteorology, conditions for growing Arabica in northern Tanzania — where Mt. Kilimanjaro and other uplands are — progressively have worsened over the last five decades. The paper focused on the coolest temperature of the day, during the night. Other crops, including maize, soy and rice, have been found to suffer disproportionately from increased nighttime temperatures, although scientists don’t know why. From 1961 to 2010, nighttime temperatures in Tanzania’s northern coffee-growing region increased by about 2.5 degrees, the paper said.

Suzana Mbwambo, chief of Crop Productivity and Quality Improvement for TaCRI, the Tanzania Coffee Research Institute, said warmer temperatures have made the lower elevation bands of Tanzania’s highlands, roughly where Mushi’s farm is, "no longer suitable for coffee production."

Based on temperature forecasts, Craparo — lead author of the paper — predicts that by 2030 Arabica orchards in Tanzania’s highlands will be only one-third as productive as they were in 1960. By 2060, Arabica will be nearly impossible to grow, he said. Rainfall has dwindled slightly since 1960, but Craparo said so far the effect has been minimal. Moreover, he doubts changes in precipitation will have much impact on coffee harvests in the next several decades.

In principle, farmers could move to higher elevations where temperatures remain sufficiently cool. Today, coffee is grown on the flanks of Mount Kilimanjaro up to 6,000 feet, far below its 19,341-foot summit. There’s potentially suitable unoccupied land there and elsewhere in Tanzania’s highlands. But new farms would encroach on biologically significant forested parks harboring wildlife such as buffalos, bushbabies and monkeys. Goodsteven Maro, a soil scientist at TaCRI, said that in the future, farmers will be gradually squeezed between the steadily rising zones suitable for coffee cultivation and the protected Kilimanjaro park. 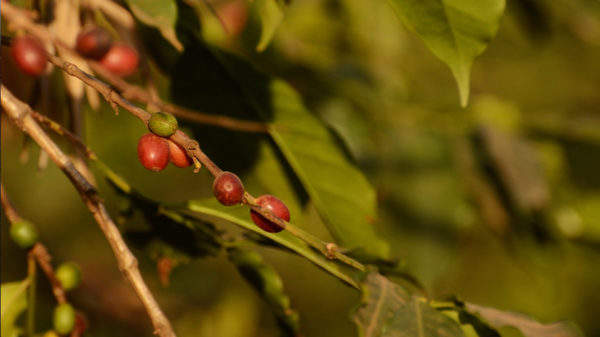 The problems facing coffee growers are global in scope. Earlier this year, a paper in the journal Climatic Change forecast "decreases in suitability" for 90 percent of the land where coffee is raised in Nicaragua by mid-century; coffee currently accounts for 13 percent of Nicaragua’s exports.

These and other coffee forecasts anticipate the future by identifying areas where, based on climate models, temperature will be suitable for Robusta and Arabica coffee. They rarely take into account rainfall. That’s hard to predict accurately in small regions and impossible at present on a global scale. Aaron Davis, a botanist at Kew Gardens in London, one of the world’s leading plant research and conservation centers, said the results of different precipitation projections are so far apart that, when graphed together, "it’s more like an abstract art work."

Estimates of future coffee harvests also generally fail to take into account possible changes in crop diseases and pest infestations, although experts said the impacts could be devastating.

Insects are highly sensitive to temperature. If it’s too cold, they can’t reproduce. Within the temperate range in which they thrive, they multiply faster and cause more damage when it’s warmer. But it’s difficult to anticipate specifically how pests will respond to warmer weather, because their behavior depends also on the range of hosts and predators that feed on them, all of which also could change.

The world’s most destructive coffee pest, the coffee berry borer, has begun invading territories that were previously too cool for the bugs. A sesame seed-sized beetle, the berry borer burrows into the cherry and lays eggs inside the bean. Serious infestations can destroy one-third of a harvest. On Mount Kilimanjaro, the upper elevation at which berry borers live has risen by roughly 1,000 feet since 2000, exposing more farms to the insect. New infestations attributed to warming have been reported in Ethiopia. One of the few forecasts of coffee pests, a study of the berry borer in East Africa, predicted that by 2050, the insect will be "particularly damaging in current areas of high quality C. Arabica coffee production." The paper warned, globally, of "grave implications for the coffee industry."

We’re already 20, 30 years into climate change and nothing has happened.

More than 90 percent of Tanzania’s coffee is grown by small farmers who usually own less than 2.5 acres of land. They’re mostly poor. According to one survey, one-third don’t own a radio; a bicycle is a luxury for almost all. Emanuel Mbise, a middle-aged father of 11, owns 700 trees on the slopes of a small, extinct volcano overlooking the town of Kikatiti, in northern Tanzania. He said that the late arrival of this season’s "short rain" had him worried and that a drought threatened to desiccate embryonic flowers that had sprouted. But a sprinkle that morning had given him "motivation."

Mbise earns most of his income selling Arabica coffee. The crop early this year was poor; he harvested only 235 pounds of beans, far below the 2,200 pounds he reaps in good years. Such poor years have become more common since his youth, he said. Rainfall is less reliable, reducing the likelihood of a good harvest. He fears the deterioration will continue, making "conditions terrible in the future." But he can’t see how else to earn cash for school fees and store goods. "We’re farmers," he said. "There is no other way to access money."

Davis, the Kew Garden botanist, called predictions of coffee’s demise overblown. "Clearly there’s cause for concern," said Davis, who leads the institution’s coffee research program. "Climate change is already impacting coffee in a big way." However, Davis said that a "diverse portfolio" of adaptation measures could save the beverage, the crop and the famers that grow it. Encoded in the genes of some coffee species could be the capabilities for growing under the conditions of 2050 or beyond. Many of these ignored species are drought-tolerant, he said. Before they could be raised commercially, "they have to be acceptable to the consumers," a requirement that will require extensive research. Davis pointed out that coffee preferences have changed before. "The coffee-growing landscape of the world has changed even in the last 100 years, and it will change in the next 50 years," said Davis.

With funding from the U.K., Denmark and Norway, Davis is studying ways for Ethiopia’s coffee producers to respond to warming. Several years ago, he published a paper predicting that by 2080 indigenous Arabica might be unable to grow in Ethiopia, which contains a large swath of the species’ native habitat. He predicted a "profoundly negative" future for cultivated Arabica in Ethiopia, which is responsible for up to a third of the country’s export earnings. Creating new strains of trees could take decades, and there isn’t much time to spare. "We’re already 20, 30 years into climate change and nothing has happened," said Davis.

Maro, the soil scientist at TaCRI headquarters in Tanzania, said that his colleagues are testing a new line of drought- and temperature-tolerant Arabica coffee trees that "survived where others had not." Whether they could withstand the conditions that Tanzania farmers will face in 2050 remains to be seen.

The warming world brewing behind that hot cup of coffee

Brewing a greener cuppa joe at Starbucks and Thanksgiving Coffee