For Bloomfield, a fresh energy strategy can create jobs and resilience, with promise for Main Streets across the nation.

In late March, the Rocky Mountain Institute hosted the second annual eLab Accelerator. Described as a bootcamp for electricity innovation, the four-day intensive work session brought together 12 teams from across the country — from New Mexico to Alaska and California to New Jersey — working on new business models, energy innovation districts and new customer solutions. Together with RMI facilitators, Reos Partners and a panel of expert faculty, they sped progress on their respective efforts. This is one of their stories.

How does a single streetscape project turn into a community-wide energy independence effort? Tiny Bloomfield, Iowa, discovered the answer with the help of RMI’s eLab Accelerator. A team from Bloomfield attended the 2015 Accelerator at Sundance Mountain Resort in Utah, and its story is a surprising one with big implications for small towns across America.

Today, Bloomfield is well embarked on a path to be an energy-independent community, but it started with far smaller ambitions.

“We were looking at doing a streetscape project,” said Carol Ann Taylor, city clerk and treasurer of the city of Bloomfield, “and one thing kind of led to another.”

Bloomfield, in southeast Iowa, has a population of just 2,640. “We are a small, rural town that has kind of stagnated over the years,” said Chris Ball, eLab Accelerator team champion, Bloomfield’s energy efficiency director and a director of Bloomfield Main Street, a public-private partnership for civic improvement. Bloomfield, like much of small-town America, experienced “a lot of brain drain.”

“We suffered from not having a lot of good-paying jobs and opportunities,” Ball said, and a lot of young people left. The community — and the Midwest more broadly — has other exports, too. It exports corn to America. It exports wind energy to America. Now it’s time to take care of itself.

Its road to a cutting-edge energy solution began when it decided to tackle a minor symptom of decline: the decaying streets and sidewalks in its downtown. Ball said Bloomfield “hired a firm that encouraged them to put in a ground-source heat pump solution,” to serve buildings on the town square, while it was digging. In this it followed the RMI adage of “right timing” energy investments.

This geothermal project proposal attracted the attention of Jeff Geerts of the Iowa Economic Development Authority (and subsequently a project team member) as the authority was seeking an energy-independence demonstration community.

Geerts was aware of the panoply of energy solutions that had been tried around the region and saw an opportunity to bring things to bear in Bloomfield. He encouraged the Iowa Association of Municipal Utilities (IAMU) to work with Bloomfield to answer the question: Could Bloomfield potentially go net zero in terms of electricity?

“We buy all of our electricity, all of our natural gas,” said Ball. “We are a complete consumer in terms of energy. How can we become a net producer instead of a net consumer?” Thus Bloomfield's streetscape project morphed into a net-zero exploration and a story, eventually, of community energy independence.

The IAMU study found Bloomfield could become a net-zero energy community, easily (relatively speaking). Jason Meyer, a senior associate with RMI’s electricity practice and the team’s facilitator at Accelerator, explained: “They have significant renewable energy resources and a lot of energy-efficiency opportunities.”

In fact, said Doug Dixon, president of Bloomfield Main Street, the study is “a roadmap for how Bloomfield could achieve energy [net zero] by 2030” — in just 15 years.

“We had four or five public meetings and engaged a lot of different groups, pulling ideas out of the community,” said Ball. 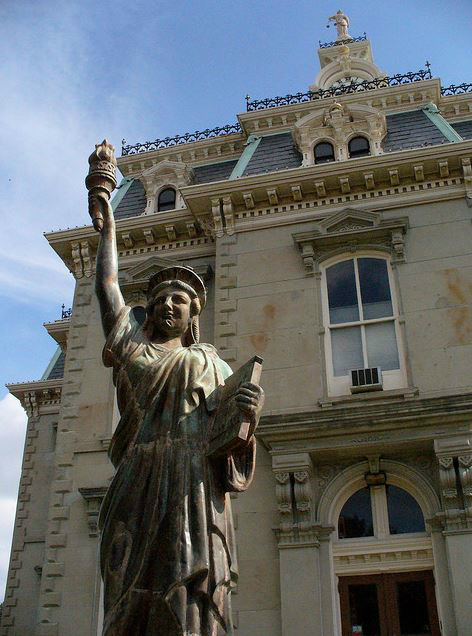 It didn’t resonate because Bloomfield needs more than energy. “51 percent of our population is considered low to moderate income,” explained Ball.

“We do all of our utility billing from my office,” Taylor, the city clerk, said. “We struggle trying to not shut their utilities off through the winter.”

The net-zero-energy project was technically feasible but didn’t have buy-in. Ball said, “If we hadn’t gone to Accelerator, probably all of this would have stopped very quickly.”

The Bloomfield team came to Accelerator, a four-day, intensive workshop for innovative electricity projects, with 11 other teams. Although the others were from much larger communities, Bloomfield found itself facing the same questions, said Taylor: “Why are we doing this? How much impact can this have for the whole city? And why would they buy into it?”

“Accelerator helped our vision coalesce,” said Dixon, president of Bloomfield Main Street. “It certainly opened our eyes to the possibilities.”

Over the three days of the Accelerator, Ball explained, they began “talking about how do we make Bloomfield an energy-independent community, with that being one method to build jobs, change our economy and become more resilient.”

The energy resources that the IAMU study found in Bloomfield were reimagined as the key to rejuvenating the whole town. The Bloomfield team made a crucial pivot at Accelerator from what it wanted (net-zero energy) to why it wanted it (energy independence), and rooted its project in its community’s values of jobs, durability and up-by-the-bootstraps self-sufficiency.

“The goal shifted completely. It was just talking about energy and it shifted to that just being a strategy, a tactic,” said Ball. The goals became, “Can we bring back jobs here? Can we be more resilient?”

The new objectives “were goals that would resonate back home.” All of Bloomfield’s greatest challenges — brain drain, a dearth of jobs and opportunities — would be targeted using energy.

“By utilizing our resources responsibly and keeping (and creating) energy dollars in our community, we intend to attract new energy initiatives that will create jobs and position us as a community for the 21st century,” said Dixon.

“The No. 1 benefit of Accelerator to them was to develop a vision that aligned with where they were coming from as a group,” said RMI’s Meyer, the team’s facilitator. “And so it went from becoming a net-zero community to becoming an energy-independent community, for very concrete reasons.”

The project benefited in more technical ways, as well. The Accelerator process “brought a lot of different options to the table than the IAMU study had presented,” said Taylor. “When we put them all together, it may go a lot farther.”

For instance, said Ball, “we started saying, OK, there are many other ways that we consume energy. One of them is through natural gas.”

Taylor explained that the original study “didn’t capture any of the methane from hog lots, and we have a lot of them.” Now the project will take advantage of different biofeedstocks to offset some local natural-gas distribution.

“There was a lot of value in talking to other people,” said Ball. “There are just so many different things that we learned by having conversations with other teams.”

But, said Meyer, “a vision that they all shared and could buy into, that was probably the No. 1 objective.” That vision — creating a new foundation for prosperity through local energy innovation — is intended to last as long as the 150-year-old courthouse on the town square, a recently renovated landmark and a touchstone of the community’s pride and sense of durability.

The team now has a clear path to leverage Bloomfield’s abundant local energy resources to create jobs, keep money in the community, revitalize and green its infrastructure and burnish the town’s reputation, brand and pride.

“That is really what they define energy independence as,” said Meyer. “It’s about having a powerful role and self-determination in how energy positively impacts your community.”

And the community? “I was just amazed at the response; they’re excited for it,” said Taylor. The town’s seniors, whom she suspected “would be a little more resistant,” support the project and its self-reliance: “They grew up that way; they didn’t rely on electricity. Everyone’s from the country; they had their own heating source and their own gas if they needed it. They were all for it.”

Now, “solar initiatives are being discussed broadly among business owners,” said Dixon, and “the school system is exploring alternative fuel in their transportation system.”

On May 11, the Corporation for National and Community Service, the federal agency that administers AmeriCorps, announced that Bloomfield will be one of 10 communities nationwide to become part of the agency’s new Operation AmeriCorps initiative. Fifty-six fully funded AmeriCorps volunteers will cycle through Bloomfield over the next two years, a huge contingent for a town of 1,200 homes.

The IAMU study found that energy efficiency alone can reduce Bloomfield’s energy consumption by 23 percent, and the volunteers will be working on a house-by-house energy-efficiency audit as part of the project.

Opportunities to join the AmeriCorps volunteers in Bloomfield are still available, said Ball, and it is an exciting project to be involved in.

“If you’re young and idealistic and you’re trying to figure out how to focus on local energy, local food, what better place to come and prove that your ideas work?” he said.

“It’s the ultimate playground to try local production. We’re trying to completely transform the town from being a consumer to a producer, starting with energy but looking at other things as well. I think this is a great place to test your ideas and theories and say, ‘Can local work?’”