With everyone flocking to supermarkets to stockpile eggs and meat, protein is front of mind for many during the uncertain times of COVID-19 outbreak. But could a tiny aquatic vegetable become the primary source of protein for millions of people worldwide? An Israeli start-up believes so.

What if all food — even processed food — could be made protein-rich and more nutritious just by adding one ingredient? Better yet, what if that ingredient could be grown year-round using very little land, water and energy? This would be invaluable at the best of times but could be crucial in building a more resilient food supply chain in times such as now.

That’s the vision of Hinoman, an Israeli agtech startup. And it’s betting on a tiny, protein-packed vegetable — a member of the duckweed family — to shape the future of global protein consumption. Hinoman has spent close to a decade cultivating this vegetable and developing methods to grow it in a scalable and sustainable way. The vegetable is called Mankai.

A proprietary strain of duckweed, Mankai is the world’s tiniest leaf vegetable. It has no roots; it floats on the water. Duckweed has been eaten for hundreds of years in Southeast Asia. Grandmothers in certain tribes in Laos, Vietnam and the north of Thailand used to pick it up from slow-moving water bodies in the winter season and use it in soups and salads as a source of protein.

The word "Mankai" combines "manna," the heaven-sent food; "chai," which means "alive" in Hebrew; and "khai-nam," the Thai name for duckweed.

In 2019, some cafeterias at Harvard University started serving Mankai smoothies and veggie burgers, with more Mankai-containing menu items rolling out later this year. Soon, Mankai will be available at dining establishments on the Massachusetts Institute of Technology campus as well. Hinoman is also preparing to launch its product at retail in Japan. One of its goals is to build Mankai into a well-known, widely available food brand by 2025.

Ron Salpeter, Hinoman's CEO and one of its three co-founders, last fall spoke with McKinsey partner Michael Taksyak at Hinoman’s headquarters near Tel Aviv. Salpeter shared his views on how consumers’ eating habits are changing and what lies ahead in meat and protein consumption. An edited version of their conversation follows.

Ron Salpeter: Alternative protein must be viewed within the broader context of two megatrends: conscious eating and the "plant forward" agenda. Young consumers — millennials and Gen Zers — are the predominant force shaping demand in everything, including food, and they are the ones driving these two megatrends. So, I believe these two trends are going to dominate the food industry in the next 20 or 30 years.

I don’t subscribe to the idea that people will stop eating meat in the next 20 or 30 years, but I do think that as soon as 2030, eating meat will, to a large extent, become immoral.

The first trend, conscious eating, means that consumers now think, "How does the food that I eat actually affect my body?" People are willing to spend time educating themselves about this. I have two daughters — one is 24 and the other is 20 — and very rarely do they put anything into their bodies without first looking at the label. The younger generations want to know what is in their food. Consumers now also take into consideration how their food affects the planet. I don’t subscribe to the idea that people will stop eating meat in the next 20 or 30 years, but I do think that as soon as 2030, eating meat will, to a large extent, become immoral; people will feel rather uncomfortable eating meat.

The other megatrend is the plant-forward agenda. This agenda, promoted by organizations like the Culinary Institute of America, is about making sure people are exposed more and more to fruits and vegetables because these foods provide elements that are lacking in processed foods. And there is growing evidence that procuring one’s needs for protein or iron solely from meat sources is not enough.

Here’s how I think these trends will translate in the food industry: more regulation in food labeling and food marketing. I think that, in the not-too-distant future, regulators will establish a scale for food labeling that will clearly indicate what we call the bioavailability of the food — how much of what is in the food is really absorbed into the body — and the food’s impact on the environment. So, food labeling will change. And the same goes for food advertising.

Taksyak: The food industry has changed quite a bit, even in just the past few years. Has anything surprised you as the market has evolved?

Salpeter: Social media has proven even more effective than I thought. It is very effective in creating a space for newcomers. I’m surprised at how fast it brought innovative food manufacturers, like Beyond Meat and Impossible Foods, to consumers’ attention.

Another data point that surprised me is that, according to Innova, a market-research company, new food offerings with vegan-related claims have grown more than 45 percent annually over the past few years. That’s tremendous growth in new products targeting a consumer group that even just five years ago was considered marginal by most large food companies.

Taksyak: Are vegans the target customer for Mankai? Interestingly, the two alternative-protein companies you just mentioned have grown so rapidly because they’re targeting meat-eaters, not vegans or vegetarians.

Salpeter: Mankai is for everyone. We believe we can make the world a healthier place by embedding Mankai, an all-natural source of macro- and micronutrients, into the processed foods that consumers like to eat. We actually do not think of Mankai as an alternative protein; that term does not do justice to the virtue of this product. It’s a superfood — a dietitian’s dream.

The true challenge is scalability. In the food business, if you cannot offer your product in large quantities, you’re a marginal — and probably soon-to-fade — phenomenon.

By 2025, we want to build consumer awareness to the point that the emblem or the stamp of Mankai on a food product will become synonymous with quality and bioavailability. That means when consumers see the Mankai emblem on a food product, they’ll know that the food they are buying is packed with protein, iron, vitamin B12, calcium and other nutrients that won’t just pass through and leave the body very quickly but will make a significant contribution to the overall health of the body.

Taksyak: What do you think it will take for Hinoman to achieve that level of consumer awareness?

Salpeter: I’ve been told by many people, "Keep your messages simplistic. Consumers know nothing about protein or iron or vitamin B12; they know so little about what they eat."

People have been telling me that education will be a challenge, a barrier. But I’m finding that consumers are more savvy and more sophisticated than people tend to think — and they have a strong appetite to try new solutions.

The true challenge is scalability. In the food business, if you cannot offer your product in large quantities, you’re a marginal — and probably soon-to-fade — phenomenon. Scaling up is a capital-intensive effort for us because it requires constructing aquatic precision-agriculture basins in greenhouses; that’s our cultivation environment for Mankai. So becoming more efficient in our production to improve our yields is our biggest challenge. That’s where we will be concentrating our efforts in the years to come.

Taksyak: What’s your craziest prediction for food in 2030?

Ron Salpeter: By 2030, it will be possible to achieve personalized nutrition. If people somewhere realize that there is a specific need — for example, a need for more iron to deal with anemia in a certain region — then we will be able, with just the touch of a screen, to create a non-GMO iron-accentuated crop right there. This will be just an initial step toward a far more ambitious endeavor: creating ingredients that match the unique physiological and metabolic needs of each individual. That’s what I see as the future of food.

This interview originally was published on the McKinsey blog. 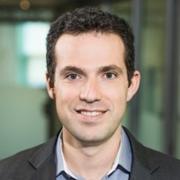 See all by Michael Taksyak