<p>The Southern California Public Power Authority and Ice Energy are launching a project to shift 53 megawatts of peak-time power consumption to hours of lower demand by deploying units that make and use ice to run air conditioners.</p>

The Southern California Public Power Authority and Ice Energy are launching a project to shift 53 megawatts of peak-time power consumption to hours of lower demand by deploying units that make and use ice to run air conditioners.

SCPPA, which represents 11 municipal utilities and an irrigation district serving about 2 million customers, and Ice Energy, based in Colorado, announced their agreement today to work on what they describe as the first utility-scale, distributed energy storage project in the United States.

"This is a historic day for the utility industry and in recognition for the role that energy storage will continue play" in reducing peak demand," said Chris Hickman, Ice Energy's executive vice president of utility solutions. 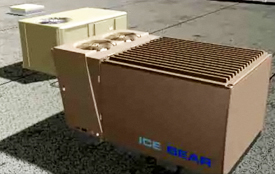 {related_content}For utilities, energy storage systems are considered key Smart Grid components because of their capacity to store energy efficiently and dispatch it when and where needed.

At night, when demand on the grid is low, the Ice Bear goes in to "ice charging" mode, freezes 450 gallons of water and stores it.

During the day when the grid reaches peak demand levels, typically between noon and 6 p.m., the Ice Bear goes into "ice cooling" mode. It takes over from the air conditioner's energy-intensive compressor and cools the hot refrigerant using the ice made the night before. The cooling cycle lasts at least six hours until the ice completely melts, at which point the AC compressor goes back on the job and the ice making and cooling cycles begin again.

Installation for SCPPA will begin in the first half of the year and rolling deployment will take about two years. About 1,500 government, commercial and industrial buildings -- retrofits and some new construction -- will be involved, Hickman said.

The power authority and the company say that the project will permanently reduce demand peak electricity demand and, when complete, can shift as much as 64 gigawatt hours of on-peak consumption to off-peak times annually. The power authority estimates that the shift can offset enough peak demand to serve the equivalent of 10,000 homes.

The benefits cited include an increase in systemwide efficiency in addition to improved efficiency at the end-load or building level; increased grid reliability; better reliability for the integration of energy from renewable resources, which are intermittent and largely available at off-peak times; and a buffer for customers against prices for power during peak periods.

When asked, Walden of SCPPA said the system costs about $2,000 per kilowatt of capacity.

Ice Energy leaders said they have tested the technology with 20 utilities in the United States and Canada and they are looking forward to other major projects.

"We believe that this contract represents just the tip of the iceberg -- while it's very big for us, it's very small compared to the problem we're seeking to address," said Ice Energy CEO Frank Ramirez.

In terms of energy storage systems, thermal energy storage sits at the end of the spectrum favoring capacity and usage over a period of time with flywheels providing high-end, fact-acting response and batteries filling the middle range, Hickman acknowledged.

Though Ice Energy’s applications are relatively new, thermal energy storage has been around for decades.

CALMAC, founded in 1947, has its IceBank energy storage system in place at more than 3,300 sites around the world. The New Jersey-based company and the Sarasota County School System recently announced that the Florida schools have saved more than $8 million in energy costs in the past 18 years by using the company’s thermal energy storage equipment.

In a prepared statement about the Ice Energy and SCPPA project, Jeffrey Byron of the California Energy Commission said the venture meets the state’s requirement that utilities consider energy efficiency and demand-side management solutions before investing sources of generation. “This project includes all of the aspects we look for: managing electrical consumption, improving system efficiency, reducing greenhouse gases, and creating regional jobs for our communities,” Byron said.