Ten thousand years ago, China’s ancient inhabitants harvested the grains of wild rice, a perennial grass growing up to 15 feet tall in bogs and streams.

The grains were small and red, maturing in waves and often shattering into the water. Their descendants transformed that grain into the high-yielding annual crop that today feeds half the world’s population.

When agronomist F.H. King toured China’s meticulously maintained rice terraces in 1909, he called the men and women who tilled them “farmers of 40 centuries.” To him, they seemed to have unlocked the secret to conserving soil and maintaining agricultural fertility indefinitely.

An international network of scientists is working toward a radical solution: perennial rice that yields grain for many years without replanting.

By crossing domesticated rice with its wild predecessors, they hope to create deep-rooted varieties that hold soils in place, require less labor and survive extremes of temperature and water supply. Plant breeders have been trying to do the same for wheat, sorghum and other crops for decades.

With rice, the vision finally is nearing reality. Chinese scientists are preparing to release a variety that they say performs well in lowland paddies and, with more breeding work, eventually could thrive on marginal land as well.

“This line of research foreshadows a more sustainable way of raising crops in the uplands,” said Casiana Vera Cruz, an expert on upland agriculture at the International Rice Research Institute (IRRI) in the Philippines.

She said the research especially could affect women, because they are most often responsible for the hard work of hand-planting rice each spring on small mountain farms.

The biggest strides are taking place in China, where geneticist Fengyi Hu and his colleagues at the Yunnan Academy of Agricultural Sciences are completing nearly a decade of trials on perennial rice varieties, including PR23 (PDF), a strain they claim yields harvests close to those from conventional rice for four years or more.

One agricultural company in Yunnan will test PR23 and similar varieties on more than 1,500 acres this year, and researchers are trying out PR23 in Laos as well. If Yunnan’s government approves the new rice for widespread release to farmers, it will be among the world’s first perennial grains to be grown beyond experimental fields. 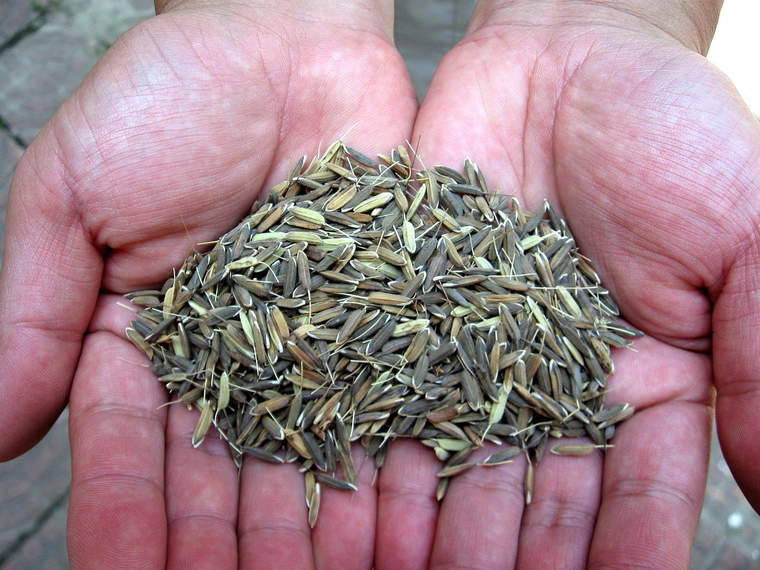 Desmanthus4food via Wikipedia
Seeds of fertile, rhizomatous plants developed from a cross between Oryza longistaminata and domestic rice by rice breeders at the Yunnan Academy of Agricultural Sciences in Hainan Province, PRC.

Critics argue, however, that perennial grains such as PR23 never will be able to feed the world’s growing population. Kenneth Cassman, an agronomist at the University of Nebraska whose work focuses on global food security, said devoting a greater share of the world’s limited agricultural research funding to perennial rice research would be a mistake.

“The goal is not just to increase agricultural productivity, the goal is to lift people out of poverty and provide adequate nutrition and health,” said Cassman, who worked at IRRI in the mid-‘90s. “And there’s no way that low-yielding perennial grains grown on small, marginal farms can lift anyone out of poverty.”

Instead, he argues that farmers should grow drought-resistant trees or pasture — not grains — on steep hillsides to stabilize soils, and scientists should focus on improving annual grain yields in environments truly suited to them, such as flat fields with adequate water.

Nevertheless, those involved with the perennial rice research in China say it could have global environmental implications. Millions of farmers in Asia and Africa grow rice in marginal upland areas at the cost of massive soil loss (steep, unterraced rice fields in Laos, for instance, lose soil around 20 times faster than the average global rate at which new soil forms).

The same is true for other crops on other continents. Half the world’s population depends on marginal lands for food, according to a 2010 paper in Science, and annual plowing often degrades these fields further. Meanwhile, population — and demand for grain — is growing rapidly.

One widely promoted answer is called ecological intensification, in which sustainable farming techniques such as cover crops and polycultures are used to increase yields without expanding the area of land under cultivation or the environmental harm it causes.

But proponents of perennial grains argue that agriculture needs a more fundamental fix — in essence, a shift away from humanity’s 10,000-year-old habit of clearing the ground each year and starting anew.

“So many problems that we think of as being part of the package of agriculture — nutrient leakage, soil erosion, carbon loss, weed invasion — are actually attributes of this highly disturbed ecosystem,” said Timothy Crews, research director at the Land Institute in Kansas, founded in 1976 with the goal of developing grain fields that mimic prairies.

“They’re very predictable in ecology. And yet, if you go out and you look at mature native [grassland] ecosystems, you do not have those problems.”

Developing perennial versions of rice and other grains is a difficult task, however. While domesticated annual grains pour 30 to 60 percent of their energy into producing seeds, perennial grasses divert much more toward building roots for long-term survival.

To boost perennial yields, Crews explained, plant breeders must coax perennials to allocate a bigger slice of the energy pie to seed production. They also can take advantage of the fact that perennials tend to have a larger energy pie to start with: They generally start growing earlier than annuals each spring and photosynthesize sunlight for more days each year.

For years, Land Institute staff were among only a scattering of scientists pursuing the development of perennial grains. Recently, though, interest has grown significantly. In 2013 the Food and Agriculture Organization (FAO) of the United Nations held an expert workshop (PDF) on the topic, and is planning another this fall.

The U.S. Agency for International Development is investing in perennial sorghum research, and the Bill and Melinda Gates Foundation is funding a study on the risks and benefits of perennial wheat, sorghum and pigeon pea in five African nations.

Still, progress is uneven due to differences in genetics, breeding techniques, growing conditions and research interest for various grains. Perennial wheat — a key crop at the Land Institute — remains decades from yield parity with annual wheat, according to Crews. Perennial maize research is even farther behind.

Among major staples, only perennial rice is “approaching reality,” according to the proceedings of the 2013 FAO meeting.

The first reports of crosses between perennial and annual rice emerged in the 1980s. Inspired by these signs of success, IRRI established a breeding program in the mid-1990s aimed at helping poor subsistence farmers combat erosion on steep slopes.

It was dropped in 2001 due to shifting research priorities, but by then, Dayun Tao, a geneticist at the Yunnan Academy of Agricultural Sciences, had made the promising cross that eventually would lead to PR23.

This was a significant achievement. Perennial and annual rice are closely related but distinct species, which makes crossing them difficult. Often, fertilization occurs but the embryo is not viable. Tao used what plant breeders call “embryo rescue,” a procedure that Crews likens to placing a premature baby in an incubator. Once the plants got through that bottleneck, future generations were able to reproduce normally.

The next step for Tao and his colleagues, including Hu, was to improve the crosses and choose the best ones. With funding from China’s National Science Foundation and, more recently, the Land Institute, they launched a series of field trials, using conventional growing practices in typical lowland fields.

Hu said PR23 and several other varieties are now good enough to release to farmers in Yunnan, although he has not yet published any papers on their performance in peer-reviewed journals.

Perennial rice is by no means ready to withstand the rigors of poor soil, scant water and extreme temperatures in the uplands, however. One challenge will be bringing in genes that instruct the plant to become dormant and shut down leaf production during the dry season to conserve water; another is adapting plants to the acid soils common in upland areas.

“As we go to more and more extreme environments, we’ll have to develop better and better materials with more traits to get them adapted,” said Len Wade, a perennial grain expert at Australia’s Charles Sturt University who is advising Hu’s team and coordinating the trials in Laos. “So there’s no one answer here. It takes a series of answers or a series of targets.”

Yet those further improvements are key, because the very places that most desperately need an alternative to conventional rice also tend to have the toughest growing conditions. In the mountains of northern Laos, for instance, farmers typically burn patches of forest in March or April and scatter rice seed over the ashes.

Before the plants have had a chance to grow strong roots, heavy rains wash away soil and leach nutrients. Yields fall, weeds invade and farmers move on after two to three years.

“Soil quality is decreasing very fast,” said Pheng Sengxua, a Lao agronomist involved in the trials, which for now are taking place only in more favorable southern areas where the terrain is flatter and soils better. “The population has increased and the forest is being destroyed by upland farmers. The Lao government wants to decrease upland farming systems like slash and burn to reduce erosion and deforestation.”

That has led to government interest in the new varieties from China, which promise benefits that go beyond grain, Wade said. A rice crop that stayed in the ground for years on end could conserve soil and provide hay, fodder and fuel during the dry season, making it a key element of a sustainable farming system in hilly areas.

That vision — of a perennial rice tough enough to flourish in some of the world’s most difficult growing conditions — is still a distant one. But within the next few years, Chinese farmers could have access to PR23, a variety unlike any other in the long history of rice farming. For the perennial grains research community, that alone would be a significant milestone.

Could perennial grains be the next climate-saving superstars?

Why we need to go beyond corn, wheat and rice