Joshua trees, unnaturally green lawns, In-N-Out Burger and giant farms of solar panels are defining features of the Southern California landscape. Some of that is rubbing off on the other side of the country, where the land of loblolly pines, sweet tea and Bojangles is having its little heart blessed with a big photovoltaic jolt of renewable solar power.

Although the Southeast is a tad less sunny than Southern California, the bullseye of U.S. solar power development, utilities in the South are scrambling to capture their own rays of sunshine. In fact, North Carolina is leaping ahead of California for the amount of new utility-scale solar farms under development, a recent SNL Energy report shows. 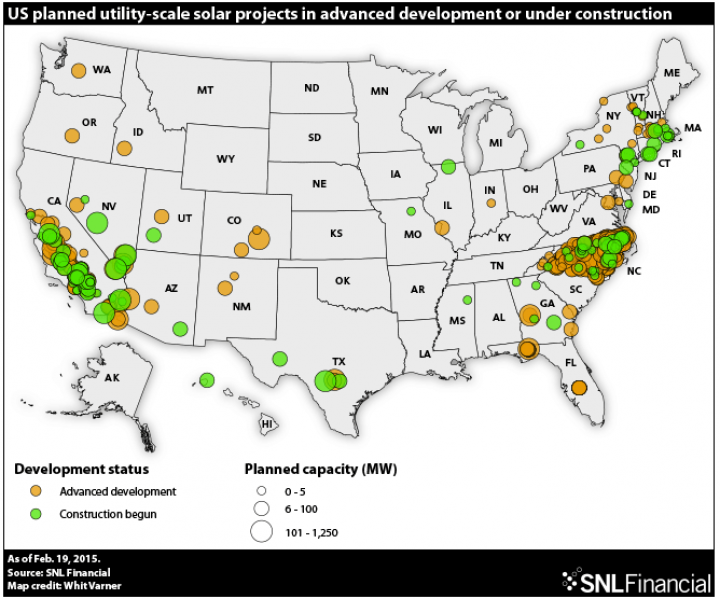 The trend is occurring as the solar industry in the U.S. is coming off one of its best years. The number of solar installations connected to the electric power grid jumped about 140 percent between 2013 and 2014 nationwide, SNL Energy data shows. More than 3.7 gigawatts (GW) of solar power capacity were installed across the U.S. in 2014, which closed out with more than 10 GW of utility-scale solar farms in operation, enough to power more than 2 million homes.

Speeding to solar in the Tar Heel State

“The adoption of solar is spreading quickly nationwide — and nowhere is that more evident than in states like Texas, as well as Massachusetts, New York, New Jersey, North Carolina and Georgia,” Ken Johnson, vice-president of the Solar Energy Industries Association, said.

Solar development is spreading throughout the Southeast as costs of solar photovoltaic technology falls and utilities rush to take advantage of federal subsidies for solar, which could expire at the end of 2016 if Congress fails to renew them.

One reason North Carolina is leading in solar is the state’s renewable energy portfolio standard, which requires major utilities to get 12.5 percent of their electricity from renewable sources by 2021, with each utility required to generate a specific amount of that power from solar, a provision known as a solar set-aside, he said.

Piper said that as Congress debates the fate of solar subsidies, known as the solar investment tax credit (PDF), growth in utility-scale solar will explode over the next two years before possibly leveling out if subsidies are cut.

The trend is occurring all over the eastern and central U.S., including one of the largest solar projects (PDF) outside of the desert Southwest, a solar development in South Texas designed to help the city of San Antonio meet its goal of getting 20 percent of its electricity from renewable sources by 2020.

When complete, the Alamo solar power installations serving San Antonio will total 400 megawatts of electric power production capacity and likely will be the largest utility-scale solar development in the U.S. east of Arizona. A similar sized project in the Florida Panhandle is on hold.

Of Alamo’s 400 megawatts of capacity, about 134 megawatts are operational, including about 5 megawatts from a new solar farm (PDF) near San Antonio that started operations in February.

“We are looking at as many low-emissions alternatives as we can outside of coal,” Scott Wudel, communication manager for San Antonio’s city-owned utility CPS Energy, said. CPS is buying the solar power from the five Alamo projects. 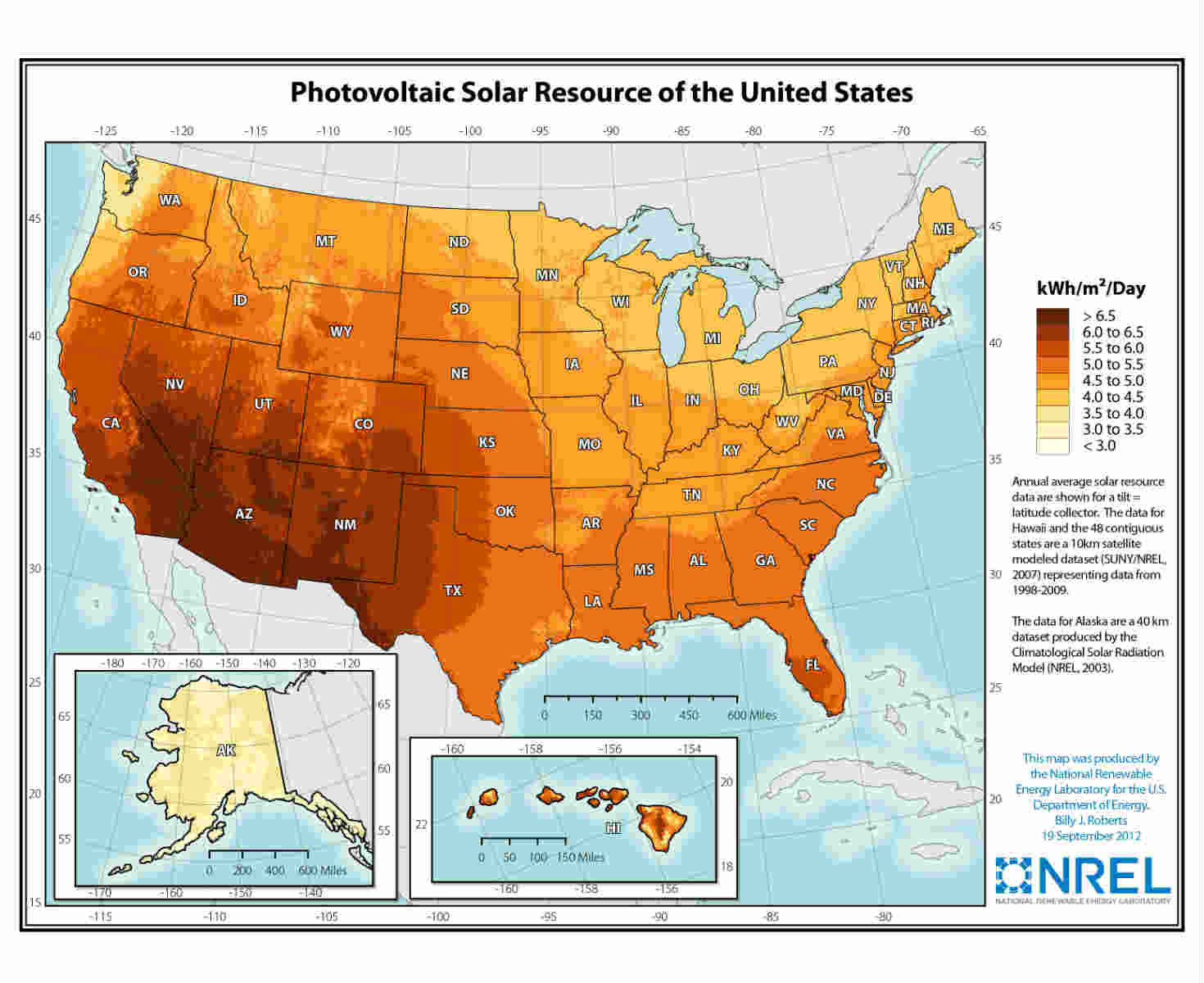 This NREL map of solar power production potential across the U.S. shows that the Southeast, from Texas to Virginia, receives roughly the same amount of solar radiation. Click to view at full size.

The Alamo projects are operated by OCI Solar and ConEdison Development (PDF), the renewables arm of the New York City-based utility Consolidated Edison, which is buying up solar projects all over the U.S.

South Texas, which receives about the same amount of solar radiation, or insolation, as much of the rest of the Southeast, is an especially good area for new solar development, Mark Noyes, senior vice president and chief operating officer for ConEdison Development, said.

“There’s a much higher potential for growth in Texas,” he said. “The land is available. The acceptance of the technology from a visual standpoint is there. The sun — the insolation — is so much better than other regions of the country.”

Still, only a handful of major utility-scale solar projects are being developed in Texas today. But the race to take advantage of federal subsidies may change the solar landscape in Texas and throughout the country by the end of 2016.

SNL Energy data show that more than 19 gigawatts of utility-scale solar in development nationwide is expected to become operational before tax credit expires.

“It’s a little bit of a race against time, if you will, as federal subsidies are being revisited and potentially pulled back,” Piper said.