With all the bullish news about solar — installations are up 76 percent in the residential market and each week it seems another large corporation announces plans to go renewable — businesses not yet in the solar camp may be wondering if it's time.

Small and medium businesses, however, haven't been moving to solar.

Even with all the corporate announcements — Apple, Kaiser, Ikea, Google — commercial solar installations haven't grown and actually slipped 3 percent so far this year compared to last year, according to the Solar Energy Industry Association's Q1 report.

What’s up with small and medium business? That market "continues to struggle from longstanding barriers to customer origination and project finance," the association stated.

SolarCity CEO Lyndon Rive puts it this way: "The industry has neglected small and medium businesses. We haven’t served them much until now, unless they are investment grade or a school or government agency. But if they are not investment grade, we haven't served them — this is true of any solar company."

A commercial deal for a small kilowatt project generally has not penciled out to be worth it to solar companies both because of installation costs and the risks of financing to small businesses who tend not to have investment grade credit.

But several developments hitting the solar market this year are changing the calculus for small to medium businesses, making solar more doable for them — and making them a more attractive market for solar installers.

Property Assessed Clean Energy (PACE) financing has been taking off. Through these, a borrower doesn't need to have upfront cash for solar installation (or any clean energy investment) but instead can pay off those costs in property taxes over a long time, as much as two or three decades. Fourteen states have "active commercial programs" while 29 states have laws enabling PACE financing, according to PACENow.

Today, SolarCity is launching a business to address this very market: small and medium businesses, piggybacking on PACE financing, and changing its workflow model in small commercial installations to constrain costs by doing installations with its own crew or its network of local installers.

In an arrangement with a PACE loans originator, Renew Financial, SolarCity will cover financing for smaller commercial buyers but it will not have to take on the risk assessment or payment administration. Instead, customers will make payments through property tax bills.

Additionally, SolarCity will handle installation, instead of contracting it out, making use of its  proprietary lightweight mounting system called ZS Peak purposed for smaller jobs.

"In the commercial business, the cost structure has been too high to go after smaller companies," because hiring third party contractors for the installation and related construction traditionally has been part of the deal, Rive explained. The cost benefit for doing that with small customers, needing less than a few hundred kilowatts or less, was questionable.

"So we are going to bring the installation work in house and do the work ourselves," Rive said.

SolarCity said the ZS Peak mounting system allows workers to install panels faster than otherwise would be the case, and it allows more panels to be fit into a given space, maximizing the amount of solar energy a rooftop can produce.

"We decided to take small and medium business installation in house,” Rive said, for it to make financial sense for SolarCity. Installation costs will be significantly lower by doing so. “So we are addressing the cost to us and the financing for them to make the product attractive. ... Most building owners can achieve a 5 to 25 percent savings on electricity."

Rive expects other solar companies to follow SolarCity into this market.

"This could change the course of the industry," and be a game-changer both for solar and for small and medium sized businesses wanting to use renewable energy, he said. “If it is successful, the rest of the solar industry will follow us and do this as well. We think SMB will be the second largest segment  — there are 28 million small and medium businesses — 99 percent of all businesses in America.”

PACE financing does seem to be opening some doors and widening the market.

Ygrene Energy Fund Inc., one of the largest PACE loan originators, announced last week that it financed such a volume of PACE financed projects that it is securitizing them, packaging 6,210 project loans into a security sold to one buyer. Ygrene said it completed a $150 million private securitization transaction with an insurance partner by issuing class A notes — and they were rated double A.

"Because it is a financing mechanism with better characteristics than other forms of market financing, we are seeing a huge uptick in the market for upgrades to renewable energy," or energy efficiency retrofits, said Stacy Lawson, CEO of Ygrene Fund.

"We fund the whole project, so there are no upfront costs, and then the pay back for upgrade goes on their (the solar buyer's) property tax bill over 20 to 30 years," she explained. "They don't have to spend out of pocket."

She estimated the 6,210 borrowers will be saving a collective $300 million in energy and water bills and prevent 180,000 metric tons of carbon from going into the atmosphere.

By legislative mandate, the energy savings achieved through a PACE funded project must exceed its cost, over the life of the installation. As a result the financing terms tend to be very doable.

The typical borrower "gets energy savings immediately and pays back on low-cost terms," she said.

According to the information site for PACE loans, 29 states have enabled PACE loans through legislation. Fourteen have active commercial programs and an even larger number have active residential programs. However, the program requires the approval of municipal or county governments, too, as they are the actual collectors of property taxes in most states, and it needs financial companies willing to offer PACE.

Why else this year is different in solar

"We anticipate another record year for solar in the U.S. in every market segment," said the Solar Energy Industry Association. Why? Among other things, the convergence of technologies that make it more compelling and marketable.

Energy storage, or battery systems that work with solar panels to store the produced energy for times when the sun is not shining, also have given a boost to the calculus of commercial solar energy systems. Storage mean that customers in even the coldest of states might pencil out some positive budget implications to installing solar. Nearly every large solar company now offers storage.

Load control, or technologies such as smart Nest-type devices that let customers control electricity demand down to the room and the hour are being sold in conjunction with solar and boosting interest.

Demand Response systems that let businesses time when they will use energy intensive applications also help.

Meanwhile, the costs of solar equipment and peripherals continue to plummet. Indeed those costs are down 14 percent year over year and now Navigant Research predicts that across the nation solar will have cost parity with utility-supplied electricity by decade’s end. Even now, solar has cost parity in several states such as California and Florida. 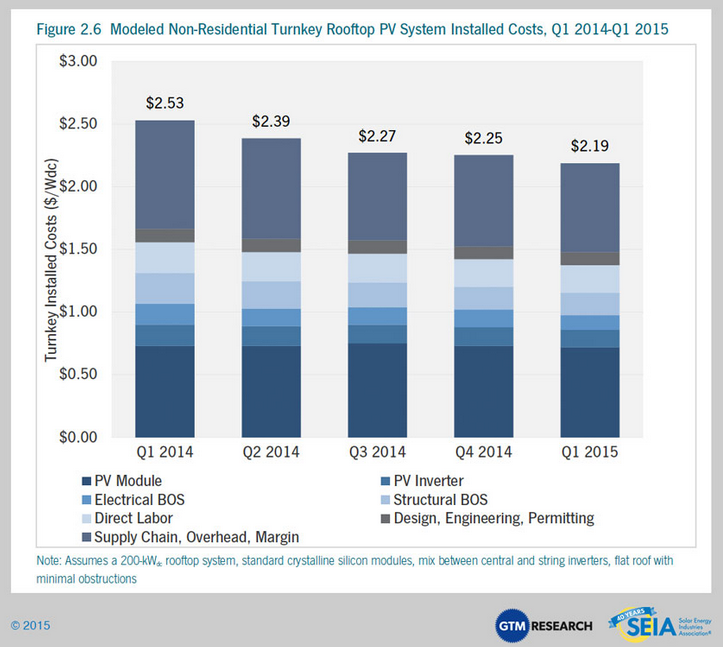