Solar for renters? This startup is taking on the challenge of 'split incentives'

The mission of Project Drawdown is to encourage innovations and solutions that can help the world draw down atmospheric concentrations of greenhouse gases — either by avoiding emissions or sequestering carbon dioxide already in the atmosphere. The coalition includes researchers, scientists, graduate students, business leaders and others dedicated to this cause. What might these solutions look like?

GreenBiz, in partnership with the Yale Center for Business and the Environment, is publishing a series of Q&As with entrepreneurial Yale alumni and students working on startups and technologies inspired by the Project Drawdown agenda. Here is one of those stories, edited for length and clarity.

Solar for Renters: The Renter's PPA is a seed-stage business started by Russell Heller, a junior at Yale College; and Cary Krosinsky, a lecturer at the Yale School of Management and a lecturer and faculty adviser for Yale College on Energy Studies, Climate and Investing.

The venture is pioneering a new business model aimed at advancing rooftop solar within the rental real estate market. Solar for Renters will pilot its first project this summer in New Haven, Connecticut, after which the founders plan to grow the business through an intentional process of learning, iteration and collaboration.

Mikaela Bradbury: Can you describe the core business and how the company got started?

Russell Heller: The core business idea is working to solve the "split incentive" problem between tenants and landlords. Let me explain: if you’re a landlord, there’s no incentive for you to cut a tenant’s utility bill by investing in solar because you’re not paying for their electricity consumption. At the same time, if you’re a renter, you don’t own the property, so it doesn’t make sense to invest in the property. You’re not going to be there long enough to reap the benefits of solar, which is an asset that pays off over the course of 20 years, for example. So, even though, in a state like Connecticut where electricity prices are very high and the regulatory framework is conducive to investing in rooftop solar, a lot of these investments aren’t getting made because of the split incentive that I just described.

We want to convince property owners to install solar panels and charge tenants enough to recover the cost ... while saving renters on their utility bills.

Our idea was to convince landlords to invest in solar and put it on the roofs of the buildings that they own — starting with single home rentals. We want to convince property owners to install solar panels and charge tenants enough money to recover the cost of the rooftop systems, along with a reasonable rate of return, while saving renters more money on their utility bills than they spend to help pay for the panels.

Bradbury: What are some trends that you've seen supporting this idea, and have they evolved since its inception?

Heller: Well, you have the solar investment tax credit (ITC) still in place, although it is going to start getting phased out at the end of 2019. Also, solar prices have come down so much, but electricity prices, especially in the northeast, are still very high because we’re dependent on natural gas and nuclear primarily. The combination of all of these and a number of other economic factors means rooftop solar makes a lot of sense here.

I think one of the major struggles for companies like Solar City (now Tesla), Vivint and the other large rooftop solar installers is that a large portion of their costs are spent on attracting and acquiring customers. But if you can work directly with landlords, you would have to put a lot less effort into that. So instead of spending 40 or 50 cents per watt out of a $3 per watt installation, you could work directly with landlords who just decide unilaterally that this is something that makes sense for them to do, and then, they’ll do it all. Right now, we’re piloting one project, but ideally, you could work with a landlord who owns a number of properties and take advantage of scale benefits. It is definitely a great time to be trying this.

Bradbury: Do you see any key risks going forward that you’re trying to plan for or mitigate in some way?

Heller: I think a major risk is regulatory risk — specifically changes to net metering laws that would make rooftop solar less financially feasible. Right now, every time you overproduce electricity from a rooftop system, like when your roof solar panels are making more electricity than your house is using, you’re allowed, in Connecticut, to put that electricity back onto the grid and essentially run your meter backwards. That's really nice because you're allowed to sell the electricity at the retail price rather than at wholesale price, but that puts a lot of strain on the utility companies and the grid.

So, long term, I don't think full net metering is something that's going to exist, and that will definitely complicate the economics of rooftop solar. But for now, especially in a state like Connecticut where there isn't a lot of wind resources and building natural gas pipelines is really difficult, solar is likely to be an important piece of the energy future.

Bradbury: Can you tell me a little bit more about your progress?

Heller: We are rapidly approaching the pilot phase right now. We're working with a landlord in New Haven, and he's really excited about the idea. This is something that he’s wanted to try for a long time, but he wasn't sure how to proceed and didn't have the bandwidth to make it happen. He recently purchased a new property, and we're soliciting bids right now from installers—  targeting June as the month that the installation will happen.

From there, it's just seeing how well things play out with the government, with the utilities, with the tenants. There are a lot of moving parts. The goal is to continue to learn, and then, ideally, we're going to write a case study where we explain the idea, the business model, the challenges that we faced, and how we overcame barriers throughout the process.

There are many ways to monetize this, but at this point, just trying to prove that the model itself works. Environmental impact is a major priority for us, so we’re not trying to hide the idea from anyone. We're talking about it right now, for example. I'd be happy if someone saw this, got excited, and wanted to work with us, too.

Bradbury: Where did your passion for addressing climate change originate?

Heller: It really comes down to the values of my parents and the people that I grew up around. I grew up near the ocean, and my dad ran an environmental organization. The environment is just something that I've always cared about, and I think when I got to college, a lot of the people that I surrounded myself with also cared a lot.

I've always been interested in the intersection between business and impact and the idea that you can do good and do well at the same time. That's definitely what I plan on doing with my life rather than the old model of "make money and then get old and give it away." I don't want to have to wait for that. 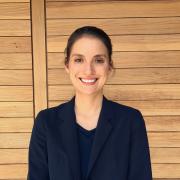 These entrepreneurs are democratizing data to predict flood risks

See all by Mikaela Bradbury