This is the latest in a regular series exploring early-stage technologies and scientific developments that could play a role in corporate solutions to climate change. Email ideas and pitches to [email protected].

Its idea: Use solar panels to power a process that captures water vapor out of the air, filters it using a calcium and magnesium cartridge and stores it for consumption in your office or business. The idea isn't to replace all of the water consumed by a particular building. Rather, the company is trying to get consumers and businesses — in both developed and developing economies — to rely less on bottled water, which contribute an estimated 1 to 2 kilograms per liter to our global emissions habit. 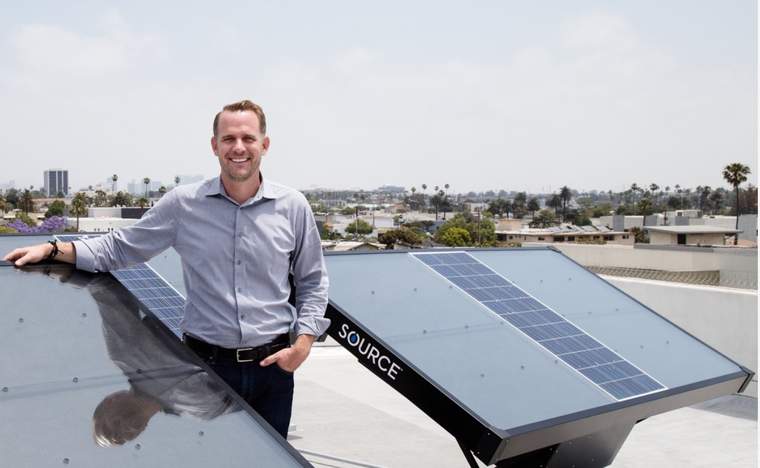 Zero Mass Water
<p>Cody Friesen, co-founder and CEO, Zero Mass Water</p>
Cody Friesen, founder and CEO of Zero Mass Water, is a material scientist whose "other" startup, Fluidic Energy, works on energy storage technology meant to be used in remote field installations. He's also an Arizona State University professor and scientist with the ASU Global Institute of Sustainability. And did we mention he's also an Aspen Institute fellow and an alumnus of the MIT Technology Review's annual 35 Under 35 list, recognizing young innovators?

Friesen got the idea for Zero Mass out in the field with Fluidic, where he was exposed to main regions and communities where water scarcity is systemic. "Many of these places have meters of water, yet there's nothing to drink," he said.

Conversely, communities in arid regions of the Middle East might see little rainfall — with reservoirs miles away. The technology also could find a home in these locations.

Indeed, Zero Mass Water installations already are on three continents, in countries including the United States, the Philippines, Jordan and Mexico. It just started U.S. commercial sales in late 2017 but the company already was tapped to send several containers full of its technology to Puerto Rico, Friesen said — bought by donors, residents and businesses that still don't have access to safe drinking water.

"Water stress is a human condition," he said. "That was the kernel behind defining the problem."

How the technology works

The Zero Mass Water system, Source, can operate off grid. Its "hydropanels" build on the principle of hygroscopy — the science of water vapor. It's the same process that inspires some of us to add rice to salt mills in humid climates, where it keeps the spice from clumping together. The thermodynamics provided by the solar panels power the capture and purification process.

A standard two-panel array can generate up to four to 10 liters of water daily (even in places such as Scottsdale, where the humidity is often less than 5 percent), according to the company's specification sheets. Each panel comes with a reservoir that stores up to 30 liters of water. Each panel measures 4 feet by 8 feet and weighs 330 pounds. The company estimates that each two-panel array can offset 70,000 plastic bottles in its 10-year lifetime.

A typical rooftop system costs about $4,500 installed — that includes running a water line from the reservoir to a tap where the water is dispensed. At that price point, the investment pays back between two and four years, Friesen said. To be clear, these panels don't generate electricity, although they often are installed alongside traditional solar arrays.

One downside for those who live in climates where the temperatures routinely drop below freezing: Right now, the technology isn't optimized to work under those conditions, according to the company's FAQ document. The system uses sensors and artificial intelligence to predict when operations aren't safe, and it shuts down as appropriate. In places where this is common, Zero Mass Water offers an alternate, external reservoir system that can store more drinking water.

"Zero Mass is part of an important trend and movement toward distributed water systems that can deliver safe drinking water off-grid," said Will Sarni, founder of strategy firm Water Foundry (and a GreenBiz columnist). "We can't keep doing things the way we're doing them."

Coca-Cola, which has put considerable muscle behind water stewardship and in addressing water risk, had been deploying a solar-powered kiosk technology, Ekocenter, that uses purification methods developed by serial inventor Dean Kamen (of Segway fame) to generate drinking water.

So far, more than 150 Ekocenters have been "implemented" as of December, with a capacity of about 78.1 million gallons. That's fewer than originally was targeted by this time. But the installation proposition is more extensive — each system is the size of a shipping container.

Zero Mass is talking up its system at both the individual and community level, among those interested in "water independence," Friesen said.

For example, it has found considerable interest from schools that are concerned about lead pipes used for drinking fountains. "We cost about one-tenth of what it would take to replace the pipes," he said. "And the impact is felt directly."

Entrepreneurs can help in the quest for safe drinking water