Reflecting what an industry group describes as a surge in commercial solar installations — after lagging behind residential and utility installations for a couple years — Whole Foods Markets and SolarCity announced the grocery chain plans to install solar on 100 of its stores.

Whole Foods entered contracts with both SolarCity and NRG Energy for the installations, which will increase the grocer's solar capacity fourfold.

The Solar Energy Industries Association issued a report (PDF), meanwhile, stating that commercial installations of solar had their highest year in 2015.

Installations atop retailers, manufacturers, banks and other institutions exceed 1,100 megawatts, the SEIA estimated, up roughly 4 to 8 percent from 2014 when commercial sales fell from the year before.

Many commercial buyers are big box retailers — Walmart is ranked first in megawatts installed and Target, Kohl’s, Costco, IKEA and Macy’s are all in the top 10 of SEIA's ranking. Retailers' relationships with ever more eco-conscious consumers may be key to these sales, but so too are electricity costs, according to the SEIA.

"While solar has long been viewed as an environmentally responsible energy choice, businesses now deploy solar because it is a smart fiscal choice as well," it said about the findings of its survey report, Solar Means Business 2015. 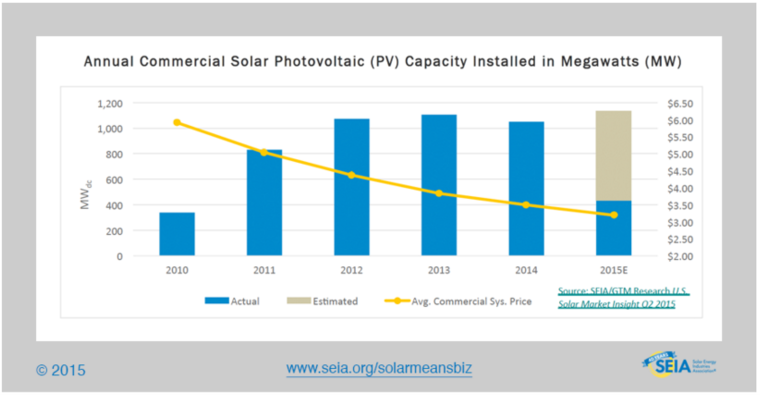 Prologis, a developer of industrial real estate, is the second biggest user of solar after Walmart. Apple, Hartz Mountain and Johnson & Johnson are also on the top 10.  Whole Foods will be among the 25 largest solar commercial customers once the installations are complete.

Some companies on the list — Walmart and Apple among them — aggressively are entering contracts to meet goals to become 100 percent renewably powered. 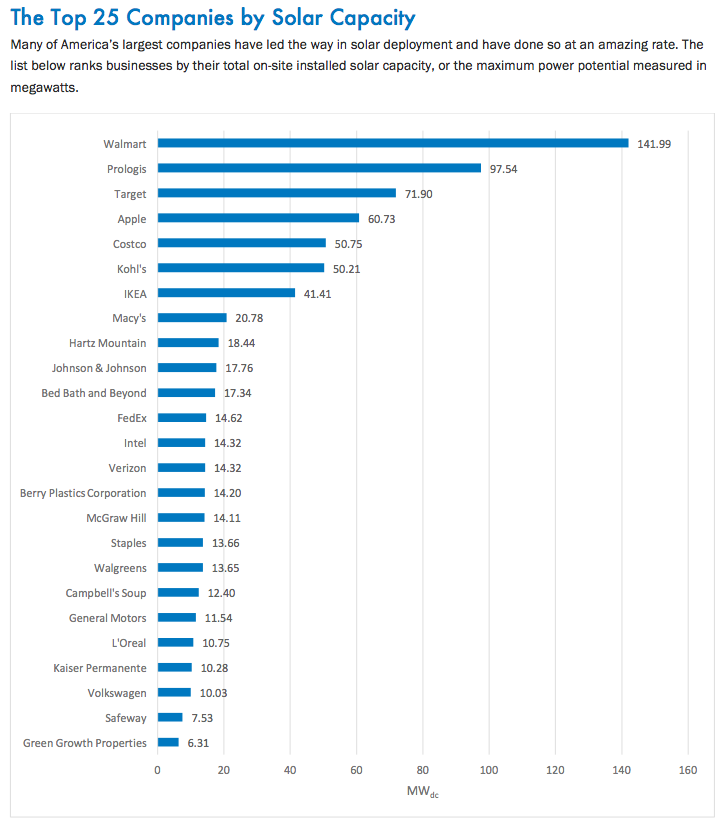 SEIA said the flurry of large commercial deals "have proven the viability of solar technology, showing that it is ready now to provide low-cost power generation on an increasingly large scale." Moreover, it said, this is happening in many markets; commercial sales were tracked in 37 states.

What’s notable about the Whole Foods and other recent commercial deals is they seem to be economic choices, at least in part.

Erik Fogelberg, SolarCity senior vice president for commercial sales and storage solutions, told GreenBiz that the Whole Foods installations and contracts offer electricity at a lower cost than the energy the stores would purchase on the traditional grid in the markets where installations are slated. SolarCity will install solar on stores in Connecticut, New Jersey and New York, among other states.

He said that economics have become a driver in many of SolarCity’s commercial sales — a segment it has targeted in marketing and finance efforts.

They’re looking also at their energy procurement costs and finding they can meet or beat their current costs (with solar).

"They start looking at solar for the sustainability goals but they’re looking also at their energy procurement costs and finding they can meet or beat their current costs of energy," Fogelberg told GreenBiz. Planned installations are not limited to the Northeast.

He said another thing propelling commercial sales lately is rack installation. "What it means for customers is that you are on and off the roof very fast. It used to take a month or month and a half. Now we are in and out of there in three or four days."

For sure, another factor loosening up this market is the Congressional vote to extend the 30 percent Investment Tax Credit for renewable energy investments for four more years and tax credits of slightly less through to 2022. SEIA and others have said the uncertainty about the future of the tax credit dampened interest in a while, especially for big investments.

Kathy Loftus, global sustainability leader for Whole Foods, cited "lower energy costs" as a reason for the installations deal as well as "increasing support or renewable energy” in a statement about the grocer chains' plans. Currently about 20 to 25 of its stores have solar rooftop systems but the deal would increase that fourfold, the company said.

Whole Foods will continue using grid-based electricity on those stores through its contract with Direct Energy Business energy management but fold the solar power into those energy portfolios, offsetting where possible the use of grid-supplied power, the company said.

News of the deal sent SolarCity stock up 4.2 percent in NASDAQ trading Tuesday to $25.08 a share, suggesting investors see more such deals in the future. SolarCity's stock had nosedived from $50 a share in mid-December. Analyst Jim Cramer of TheStreet.com told CNBC the deal gives "legitimacy" to SolarCity's pursuit of commercial customers. "We've been waiting for the big commercial deals; SolarCity got one," Cramer was quoted as saying.

How Solar City is scaling up commercial solar installations