When Elon Musk talks, it isn’t just green technology geeks that listen. That makes the billionaire entrepreneur’s recent comments about his aspirations for putting solar technology into roofs — not just on them — all the more intriguing.

The remarks, which came during solar installer SolarCity’s second-quarter earnings recap in late August, hinted at a forthcoming product centered on building integrated photovoltaics (aka BIPV). "It’s a solar roof, as opposed to a module on a roof . . .  it’s not a thing on a roof, it’s the roof," Musk told financial analysts.

Mind you, SolarCity hasn’t discussed any sort of release timeframe for this yet-to-be-born BIPV technology. But more details could be forthcoming in late October and Musk’s declaration is rekindling interest in technologies that build solar generation capabilities into windows, roofing shingles and other building components. One forecast from n-tech Research projects that the market could triple from $3 billion last year to more than $9 billion by 2019.

It doesn’t hurt that more high-profile new buildings are including BIPV features such as the San Francisco 49ers stadium in Santa Clara, California; the CIS Tower in Manchester, England; and the flagship Apple store in San Francisco’s Union Square, which includes PV panels that are integrated into the roof design.

Much of the technology at that Apple store comes from BIPV manufacturer Onyx Solar, including a skylight that generates power aside from allowing sunlight to beam through into the showroom. "We see a lot of applications for the photovoltaic glass, skylights being one of them," said Paul Simony, vice president of sales for SKYCO Skylights, which installed the roofing structure. 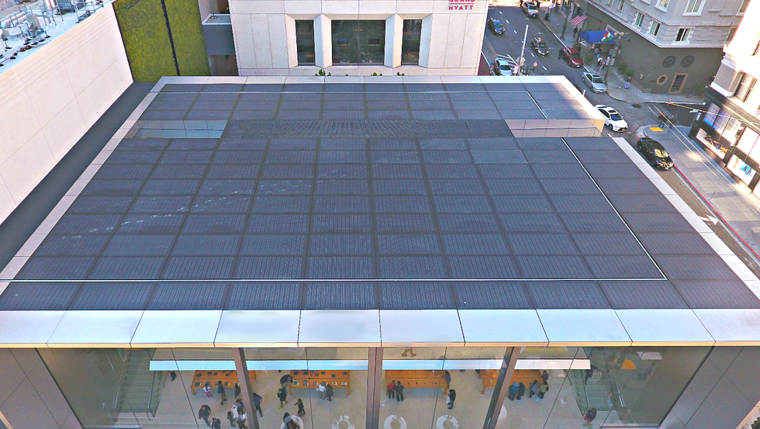 BIPV technology makes sense from an aesthetic point of view but basic economics have so far prevented the technology from becoming more mainstream — it’s still less expensive to use traditional, rack-mounted solar rooftop arrays. The vertical solar components on the CIS Tower in England, for example, were installed at a 10 percent premium, although the market has changed dramatically since the project started feeding power to the British grid system more than a decade ago. The company behind the CIS installation was Solar Century.

Plenty of companies have abandoned the BIPV market, including Dow Solar, which shut down its innovative shingles division last summer after about six years in the business. Another casualty is Pythagoras Solar, which made PV glass, including some windows installed at the headquarters of sustainable farming co-op Organic Valley.

But the buzz is back. Aside from SolarCity, another company reviving interest in BIPV technology is Solaria, which makes a series of PV windows marketed under the PowerView name. In September, it forged a relationship with NSG Group, a large global producer of glass. The deal calls for Solaria’s technology to be included in a new line of building façade products.

Solaria has negotiated a similar alliance with AGC, a Singapore glass manufacturer, to broaden its reach in Asia and is close to signing another arrangement covering North America, according to Udi Paret, general manager for building solutions, with Solaria.

Here are four other BIPV proponents still dedicated to this category:

This story was updated Oct. 24 to clarify the maker of the technology used in Apple's roof.

Is building integrated solar close to a tipping point?

The dawn of architectural solar