To the islanders of Kauai, worries about sea level rise swallowing their coastline tourism industry and memories of how tough things were when electricity rates spiked with the price of oil are constants: They come up in conversation; in daily decisions; and in island policy.

Kauai, like the entire state of Hawaii, is committed to transitioning to 100 percent renewable power electricity by 2045. The Kaua‘i Island Utility Cooperative (KIUC) is already 38 percent renewable and expects to reach 50 percent by decade's end, said Jim Kelly, communications director of the island's only utility. But that second half, getting from 50 to 100 percent, seems "pretty daunting" to all.

"Everybody is up for the challenge, but nobody thinks it will be an easy reach or cheap to make it to 100 percent," Kelly said in a conversation with GreenBiz.

The sunny island's utility has two 12-megawatt solar farms. Additionally, about 3,200 residents have roof top solar that feed into KIUC's grid. Together, these solar assets can supply 85 percent of the power the island needs on a clear sunny day — with a hydropower plant and a biodiesel operation continuously providing about 15 percent.

But because Kauai's main industry is tourism, day time — especially those clear sunny days — isn’t when electricity is in high demand. That would be evening.

After 5 p.m. is when the hotels and restaurants and homes of the island power up their air conditioning, lights, computers and appliances. Typically that is when KIUC turns to burning petroleum for electricity.

"People on Kaua’i, especially, are very conscious of climate change and they really want to be independent of oil, so we don’t have those barges coming in. We all want to be energy independent," Kelly told GreenBiz.

Hawaii has not only been dependent on oil for its after-dark electricity, but it must import the oil on barges, which increases electricity costs even more so.

"We have some of the highest rates in the nation and that, more than anything else, has compelled us to get off of oil and onto renewable energy technologies," Kelly said.

Moreover, the Hawaiian Islands are particularly vulnerable to sea level rise. According to a study by the University of Hawaii and the Hawaii Department of Land and Natural Resources, the shores of Kauai are on pace to lose 20 feet by 2050 because of sea level rise and erosion. That’s a beach worth in 34 years from now, or a generation.

So Kauains are keen to find ways to stem climate change and stop burning fossil fuel.

We have been looking for a way we can take this abundant solar resource and use it not only in daytime but at night, which is our peak electricity usage because of tourism.

"We have been looking for a way we can take this abundant solar resource and use it not only in daytime but at night, which is our peak electricity usage because of tourism. We don’t have a lot of industry here, so there's not a lot of load in the day."

That quest "is where SolarCity comes in," Kelly said.

Storing all that sunshine and managing the load

SolarCity is building a utility-scale solar plus storage plus integrated demand response management system for KIUC. The integrated, software-managed system brings together solar power from distributed rooftops, the two 12 megawatt solar farms plus a new 13-megawatt solar farm SolarCity is building and allows that energy to be stored in a 52-megawatt hour battery and then dispatched when needed.

The system, Kelly said, will provide power on demand to meet evening peak on the island's grid. The new farm will power the battery each day and allow it send 10 to 13 megawatts to the grid each evening to meet electricity demand in the heavy-use 5 p.m. to 10 p.m. hours.

In most ways, the KIUC integrated utility scale solar project is a test case, or early version of a product SolarCity rolled out just last week.

SolarCity unveiled its Dispatchable Utility-Scale Energy Storage plus Solar to the utility industry at large.

Utilities are the fastest growing segment of solar adoption by megawatt hour, according to the Solar Energy Industries Association. But combining existing distributed solar and utility-owned solar and battery and demand considerations in one package a challenge for most utilities, SolarCity officials said, so it aimed to get out ahead with this product. It already established itself in solar storage using the Tesla PowerPack battery from its sister company Tesla Motors.

Ryan Hanley, Vice President of Grid Engineering, described in an email the market need the company is trying to answer with its latest offering.

Hanley called the the utility-scale product unique because it brings the battery technology of Tesla PowerPack as well as a software platform to manage a portfolio of distributed solar rooftop arrays, storage batteries and load control.

It is a turnkey service that includes utility-scale solar and storage, and portfolios of distributed energy resources such as residential solar, batteries and controllable loads.

It is a turnkey service, Hanley said, that includes utility-scale solar and storage, and portfolios of distributed energy resources such as residential solar, batteries and controllable loads. "For all three of these programs we’re offering turnkey solutions including engineering, installation, financing, monitoring, control platforms and maintenance."

SolarCity has specialized in turnkey solutions in its residential rooftop services, as the largest distributed solar power installer in the U.S. But this product is targeted squarely at utilities.

Developing a system for Kauai helped SolarCity get the economics right. It was actually KIUC utility's needs that helped illustrate the market demand for the product.

Hearing about the promise of battery storage of electricity and knowing it needed to solve the night time electricity cost issue, KIUC put out a request-for-proposals for storage solutions about two years ago.

"We were agnostic about the technology," Kelly said, and received quite a few bids. But at the time, all the bids were too expensive and more costly than the petroleum generated electricity they were trying to replace.

But SolarCity kept working with KIUC on different proposals, and as solar equipment prices continued to fall and storage technology kept improving, it was able to come back to KIUC with increasingly better proposals and one that KIUC could afford. 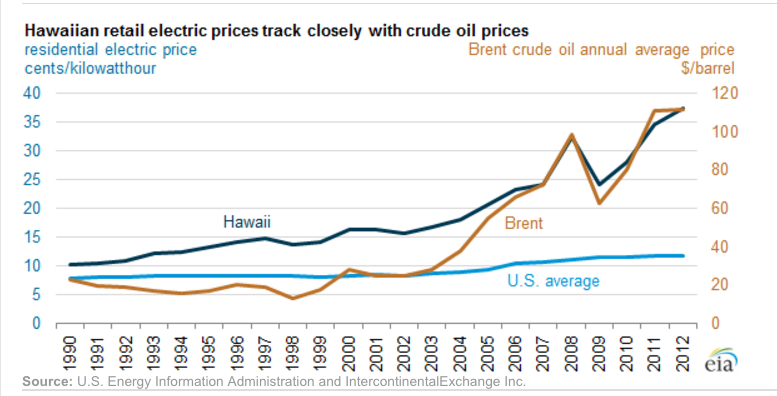 Then finally last fall, the offered price beat the costs KIUC currently incurred on its grid generationg night time power from burning petroleum. And it got the dispatchable, demand response management it hadn't planned on.

"This is completely different. I can potentially replace the oil-generated power we’ve been using at night,” Kelly said.

"The other piece that's appealing to us is the price, because are very price conscious here," Kelly said. Storage technology, he noted, became availble a few years ago but was too expensive to consider.

"This is coming in at 14 cents a kilowatt hour or 145 a megawatt hour, which is very competitive with our standard solar without storage" he said.

And it is nearly as low as what KIUC is paying for petroleum-generated electricity at current depressed oil prices levels. "Oil generation is about 13 cents a kilowatt for us and it no doubt is going to go up," he said. "We've gone above 40 cents a kilowatt," when oil prices were high.

In the day time, generation from the SolarCity 13 megawatt array will charge the battery. "Then at 6 o’clock, we can run the power from it" as in from the battery to provide evening electricity needs.

"It’s a dispatchable resource so we can run it however we want. We flip the switch," Kelly said.

Will this smooth SolarCity's rough ride?

On Wall Street, the stocks of SolarCity and other solar installation companies have been undergoing a rough ride of late, with sell-offs occuring every few weeks. SolarCity shares went from a high of $62 a share a year ago to $21.94 a share at the close of trading Friday, a 64 percent decline. However, since SolarCity announced its utility scale solar plus storage plus DER product, its shares are up slightly from $17.82 a share.

What caused the selloff?  As a number of states and big utilities cut back on solar net metering programs, specifically the rates they're willing to pay to buy electricity from distributed rooftop solar panel owners, some stock analysts have questioned whether installations will continue the industry's extraordinary growth of doubling every coulple years.

Then, SolarCity issued its Q1 earnings report which Motley Fool and others viewed negatively, even though installations had soared beyond predictions, because of a higher cost of sales. Thirdly, some investor pundits said they feared solar was becoming a commodity and solar companies were not differentiating themselves.

Storage, where SolarCity got an early lead because of its affiliation with Tesla, has been a SolarCity differentiator in utility scale solar. Tesla founder Elon Musk is on SolarCity's board and Tesla's PowerPack battery was the leader in utility scale batteries and is part of SolarCity products.

But SolarCity is trying to differentiate itself further with the new dispatchable solar plus storage integrated utility product,

And utility scale solar is now a growth industry. Utilities are finally beginnng to see the writing on the wall about fossil fuel generation and getting increasing pressure from regulators, investors and customers to transition to renewable power generation. They are investing in solar farms and wind farms.

According to the SIEA, 729 megawatts of uitlity scale solar were added industry wide in the United States in the first quarter, and 463 megawatts of residential solar.