This week, the Climate Group’s three-year-old RE100 initiative trumpeted a major milestone: 100 large companies officially have committed to powering their operations entirely with renewable energy.

That’s three years earlier than anticipated when this effort launched. What’s more, at least half of those businesses are promising to do this within three years, by 2020, which is a pretty quick timetable.

Four of the most notable new members are Dutch paint company AkzoNobel, the second largest consumer of electricity in the group after multinational retailer Walmart, with about 16 terawatt-hours of electricity consumed per year; French insurer AXA; fashion giant Burberry; and big brewer Carlsburg Group.

The good news is that the amount of dirty power that the RE100 members collectively could influence and eliminate is enormous: it’s about 146 terawatt-hours annually, about what it takes to run all of Poland. Or New York state, if you prefer an example from the United States. And now, RE100 is aiming to reach 500 members by the 2020 timeframe.

The bad news is that data from another list published this week make it clearer that it will take far more than the RE100 companies to truly slow down greenhouse gas (GHG) emissions.

71 percent of the emissions generated since 1988 come from just 100 companies.

That’s because 71 percent of the emissions generated since 1988 technically weren't generated by any of those admirable RE100 companies.

Rather, they came from the 100 "active fossil fuels producers" that are part of the Carbon Majors (PDF) database, created by CDP in collaboration with the Climate Accountability Institute. That group collectively was responsible for generating 635 billion tons of emissions over the past three decades, according to their estimates. Another data point to mull: Just 25 of these producers were responsible for half of that amount. 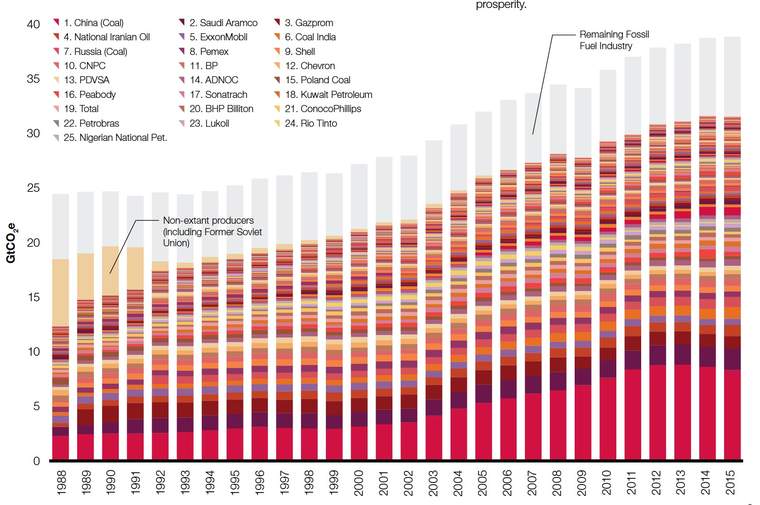 It won’t surprise you to hear that no companies in the Carbon Majors database are part of the RE100. Nor are they ever likely to be.

The biggest hope for a mindset change among the sector lies with investors, according to the CDP. That’s because about 30 percent of the companies on the list are owned by public or private investors; the rest are state-owned. What’s more, the push for risk disclosure recommended by the Task Force on Climate-Related Financial Disclosure could force these organizations to think differently.

"This groundbreaking report pinpoints how a relatively small set of just 100 fossil-fuel producers may hold the key to systemic change on carbon emissions," said Pedro Faria, technical director at CDP, in the report. "We are seeing critical shifts in policy, innovation and financial capital that put the tipping point for a low-carbon transition in reach, and this historic data shows how important the role of the carbon majors, and the investors who own them, will be."

The research used to shape the Carbon Majors report is part of a project started in 2013 by Rick Heede, director of the Climate Accountability Institute. It uses techniques established by the Intergovernmental Panel on Climate Change to shape the estimates. (More about the methodology here.)

Meanwhile, in virtually every other sector

The Carbon Majors research makes the commitments by the RE100 companies more impressive, considering the challenge they’re up against.

The diverse nature of the industries represented — from high-profile high-tech players to retailers to beverage makers to chemical concerns to household fashion brands — underscores today's widespread corporate support for clean power. But, as the Carbon Majors research illustrates, this is no easy task.

We are increasingly seeing large multinationals such as Google, IKEA and Dalmia Cement demonstrating real leadership on renewables because it makes business sense.

"We are increasingly seeing large multinationals such as Google, IKEA and Dalmia Cement demonstrating real leadership on renewables because it makes business sense — as well as helping to lower emissions, providing stable energy costs and increasing competitiveness," said Helen Clarkson, Climate Group CEO. "We are now calling on companies to go one step further, and inspire their suppliers and peers to follow their lead so that together, we can speed the transition from fossil fuels to renewables to keep warming well under 2 degrees Celsius."

Trends are moving in the right direction. The Climate Group's head of the RE100 project, Sam Kimmins, reminded us that renewable energy accounts for roughly 28 percent of the worldwide generating capacity, or more than 1,811 gigawatts. Solar and wind power now costs the same as, or less than, fossil-fuel-sourced electricity in 30 countries. And installations of new clean power technologies have outpaced new fossil fuels plants every year since 2012. 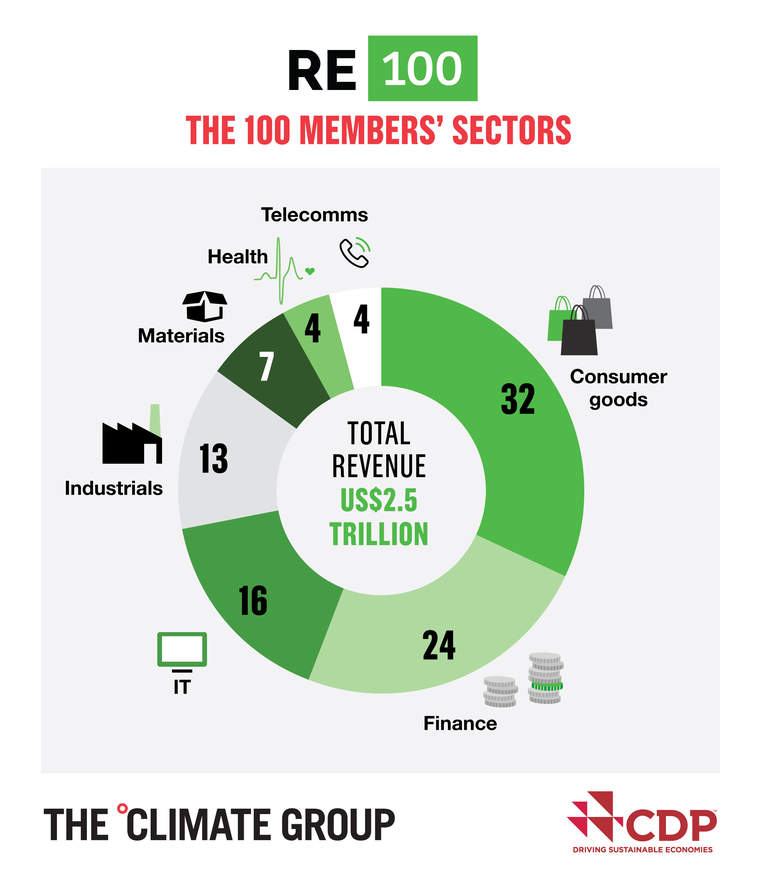 "But a 200-year-old fossil-fuel habit can be hard to shake off, even when it makes great business sense," Kimmins noted in a blog post about the RE100 milestone. "Awareness of the new opportunities presented by renewables is lower than it could be even in the corporate world, and we need to supercharge the often-glacial pace of energy policy review before government programs lock much of Asia and Africa into long-term investments in expensive and polluting legacy technologies."

On a brighter note, the influence of corporate action on climate change is already showing up in emissions data related to the power production. For example, from 2005 to 2015, the 100 largest U.S. power producers reduced the amount of carbon dioxide they spew into the atmosphere by 20 percent — even as the U.S. gross domestic product grew.

Much of that can be attributed to energy efficiency measures, and a rise in natural gas and renewable energy generation at the expense of coal power plants, according to the research, published by M.J. Bradley Associates using data from the U.S. Energy Information Administration and other publicly available information.

Surpassing 100 members, the RE100 signals a wave of change