Something delicious is growing in the 'sustainability underground'

A tour of a revolutionary and bountiful urban garden 100 feet below the streets of London.

“Why does it always have to be snakes?” Indiana Jones protested in "Raiders of the Lost Ark" as he hurtled into an Egyptian underworld.

In my case it easily could be, "Why does it always have to be lifts?" a.k.a., elevators. Vertigo and claustrophobia are two of my core skills. And the worst combination of the two, to date, comes when I’m confined in a small lift or elevator plummeting deep underground.

The first time it happened was half a lifetime ago, high in the Rockies. I was headed down a seemingly bottomless mineshaft in a worked-out gold mine. As the rock face flashed by, inches from my nose, some part of me begged to know why I had let them close the door and press the descent button?

All that flashed through my mind as, on a sunny spring day in April, I found myself in yet another lift cage, headed down into a once top-secret netherworld. I long had known of the air raid shelters excavated under London during World War II, but — apart from a long-ago visit to Churchill’s bunker — had never been inside one.

Once my colleague Richard Johnson and I had signed the forms declaring that we hadn’t been in typhoid zones and the like, Growing Underground co-founder Richard Ballard took us downstairs to put on white coats, rubber boots and elegant blue hair nets. As we descended, it struck me that Ballard was an utterly appropriate name for someone guiding us into the depths, given the extraordinary submarine feats of Robert Ballard.

Then the lift doors clattered open and we entered a world that Churchill and his hard-pressed generals, more concerned with the Nazis droning overhead and damp mold attacking highly confidential files below, could scarcely have dreamed of.

So, we joined the growing "Sustainability Underground." If Greenpeace gave the burgeoning sustainability movement elements of a navy, and Bertrand Piccard and André Borschberg’s "Solar Impulse" elements of an air force, then Growing Underground — co-founded by Ballard and Stephen Dring — is taking us deliciously deeper in the push to save the planet.

This urban hydroponics farm is in refurbished WWII bunkers just 100 feet under the swarming, grubby streets of Clapham, in South London. Next time I hear that 1970 Motown line, "War, what is it good for?" followed by the response, "Absolutely nothing," some part of my brain will protest: "Hydroponics!"

In effect, what Growing Underground does is to flip vertical farming on its head. Instead of going up, it goes down. With U.K. supermarkets recently forced to ration vegetables in the wake of poor harvests in southern Europe, local production has clear additional appeal. But the cherry on this particular cake is that the produce is already winning top accolades for its quality.

Celebrity chef Michel Roux Jr., who lives almost directly above the farm, is now a non-executive director of the company. More to the point, his Michelin-starred Le Gavroche restaurant is a customer. So is leading supermarket Marks & Spencer, retailer Whole Foods Market and online delivery specialists Ocado.

During the nation’s darkest hours, the tunnels could have accommodated 8,000 people. Now, with a total available area of 65,000 square feet, they host trays of sprouting herbs.

Back during the nation’s darkest hours, the tunnels could have accommodated 8,000 people. Now, with a total available area of 65,000 square feet, they host stack upon stack of trays of sprouting herbs. Some 20 types of herb are being grown — and as we walked along the rows we happily sampled pea shoots, rocket, red mustard, garlic chives and fennel.

To reassure anyone assuming that plants grown underground would be, well, a little anemic, the flavor was intense, fresh, delightful. And a key reason for that is the tunable, low-energy LED lighting systems that ensure the seedlings and plants get just the right amount of the right sort of light to make them insanely happy.

Apart from the advantage of local production, radically cutting down on food miles, Growing Underground is proud that its produce is pesticide-free, thanks to the fact that pests struggle to break into the complex (hence the forms we signed on the way in) and needs 70 percent less water than conventional farming methods. The complex is also entirely fueled by renewable energy, thanks to a contract with Good Energy. 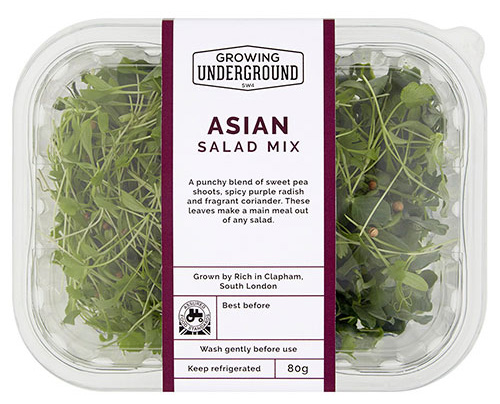 Ballard also noted that the system radically cuts down on food waste — and encourages people to add greens to their diets to boot. Working with Marks & Spencer, for example, they have developed a range of unique salad mixes, including British Mix, Italian Mix, Indian Mix and even a Japanese Mix.

Something will need to be done about the beautifully translucent plastic packaging, but Richard Ballard talked us through some of the company’s plans for the future — including creating plant-friendly mist in the growing tunnels and, eventually, pumping in carbon dioxide to boost growth. They also want to buy all-electric delivery vans, although the need for on-board — but range-shrinking — refrigeration has idled that idea.

We emerged back into the daylight with a spring in our step. But some part of my brain was still wondering whether this micro-herb venture wasn’t destined to remain an interesting curiosity, even as it scaled underground. Then we got back to the office and something rather encouraging popped up on CNN.

The headline: "Paris to turn a third of its green space into urban farms.”

The piece continued, "It all started when the city's mayor, Anne Hidalgo, who was elected in 2014, declared her intention to make Paris a greener city. The Paris government responded to her call in 2016 by launching Les Parisculteurs, which aims to cover the city's rooftops and walls with 247 acres of vegetation by 2020. A third of the green space, according to its plan, should be dedicated to urban farming."

The city’s deputy mayor, Pénélope Komitès, noted, "Paris not only intends to produce fruit and vegetables but also (plans to) invent a new urban model. ... We have seen a real craze among Parisians to participate in making the city more green. Urban agriculture is a real opportunity for Paris. It contributes to the biodiversity and to the fight against climate change."

You don’t need to be a historian to know that once the French do something, the competitive sap starts to run wild in the British Isles, and vice versa. So how long will it be before we are competing in terms of whose city is greenest — and whose hydroponic produce merits the most Michelin stars?