The top companies in the U.S. will fail to meet President Barack Obama's goal of cutting greenhouse gas emissions 17 percent by 2020, a new analysis found.

Based on data from 2007 to 2009, companies on Standard and Poor's 100 index will not only miss the 2020 target, their absolute emissions will actually increase if trends continue. The gap is even greater between projected emissions and the deep cuts recommended by Intergovernmental Panel on Climate Change.

Meeting any emissions reduction goal would require the country's most carbon-intensive industries to do most of the heavy lifting, particularly utilities. Four sectors -- utilities, energy, materials and industrials -- generate 90 percent of the total emissions reported by S&P 100 companies.

The materials and energy sectors, responsible for 12 percent and 34 percent of total emissions, performed better. The materials sector reduced emissions every year by an average rate of 0.77 percent, while energy companies improved their performance by 1.01 percent on average per year. 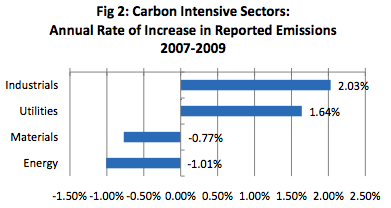 "This shows that, the absolute emissions reductions we are seeing across industry are generally not sufficient to deliver on U.S. targets, particularly within the high intensity Utilities and Industrials sectors, which are experiencing emissions growth and are responsible for nearly half of S&P 100 reported emissions," CDP said in the report.

CDP notes several factors that may have impacted the results, such as improved carbon accounting, mergers and acquisitions, and the economic downturn. It was also only able to evaluate 51 percent of S&P 100 companies that provided sufficient data.