The core team behind NexLoop, a biomimicry venture, has been collaborating on its nature-inspired water collection technology for almost two years. But the first time the three entrepreneurs met in person was in mid-October in California, when their idea won the $100,000 grand prize in the Biomimicry Global Design Challenge.

"We have tons of people who are excited about pilots around the world," said C. Mike Lindsey, who hails from Brooklyn, New York, and aspires to a career in urban agriculture. "That's the main goal now: To see what it can do in various climates, and how it can scale."

His partners, who started the project, are Jacob Russo, a Carnegie Mellon-educated architect working toward his masters in international design in Stuttgart, Germany; and Anamarija Frankic, an expert in biomimicry who splits her research work between Boston and Zadar, Croatia.

The AquaWeb incorporates lessons on how nature captures, stores and distributes water in a novel new design that enables urban farms to feed our growing populations.

Russo and Frankic met at a workshop in New York, and pulled in Lindsey when they began exploring food-related applications. Their concept combines research associated with architecture, agriculture and materials.

The trio's invention, AquaWeb, mimics the way that natural systems capture, store and distribute water — not just rainwater, but ambient moisture such as fog. NexLoop believes that the approach initially will be useful in helping container farms or indoor vertical farms to become more self-sufficient. In theory, the system could have broader approaches, such as amplifying rooftop rainwater harvesting and storage for large buildings — but that's not the current focus of their pilot work. 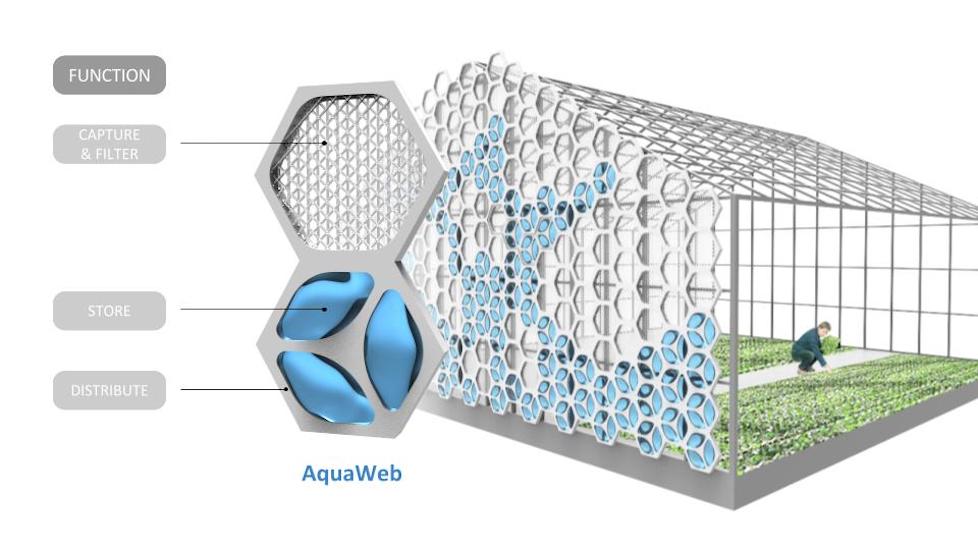 "The Ray of Hope Prize judges were impressed by NexLoop's push to further their design — making it more locally attuned, more energy-efficient and decentralized — by looking to living organisms for design clues every step of the way," said Megan Schuknecht, director of the design challenge. "The result is functional and beautiful, as well as resilient, and a great example of regenerative biomimetic design. We are all looking for ways to make our cities more resilient to the effects of climate change. The AquaWeb incorporates lessons on how nature captures, stores and distributes water in a novel new design that enables urban farms to feed our growing populations reliably and affordably using locally available resources."

The contest is run by nonprofit Biomimicry Institute (focused on identifying innovative technologies that could be part of solutions to address climate change) and the Ray C. Anderson Foundation (named for the late Interface Carpet founder and sustainability pioneers), which funds projects around the world. The main award, the "Ray of Hope," is meant to help the winners move toward commercializing their idea.

A convergence of biomimetic principles

AquaWeb's design actually combines several ideas. The water capture mechanisms are inspired by cribellate orb weaver spider webs, which are "engineered" to collect fog out of the air; the storage concepts mimic the approaches used by drought-tolerant succulents (such as the crystalline ice plant) to hold on to water; and the trio studied the ways that certain mycorrhizal funghi, such as the Jersey cow mushroom, distribute water to the entire plant structure.

They also have been busy borrowing from bees: Each module of the system is shaped as a hexagon, like a hive structure. They can be stacked together depending on the required application — a stacked pair measures 32 inches tall by 18.5 inches wide (each individual hexagonal unit is 16 inches). "They can be scaled up or down depending on the needs of who we are working with," Russo said.

In theory, the system could have broader approaches, such as amplifying rooftop rainwater harvesting and storage for large buildings.

The NexLoop team will be collecting data on several areas during the next phase of its pilot tests. For one thing, it will study how the system performs in a variety of climates — including very arid regions in Hawaii, Morocco and Africa. They also will evaluate how materials and fabrics affect how much water can be collected.

In simulations where water is sprayed onto the system, AquaWeb captures about 50 percent, according to NexLoop's early test results — or about 2,000 milliliters per square meter of fog. Right now the prototype can store about five liters of water per unit. The team estimates it would take about 20 units to support a shipping container.

Aside from systems that could be added to a rooftop or onto the structure of a greenhouse, NexLoop is studying ways that these ideas could be incorporated directly into building envelopes — offering multiple functions with minimal material additions.

Who knows? Perhaps it could provide the foundation for decentralized water systems that support a variety of functions across next-generation buildings. For now, NexLoop will get busy proving its concept.