Ford, Tesla, Edison: The 'War of Currents' and cars

Ford, Tesla, Edison: The 'War of Currents' and cars

The following is a sponsored story from Ford Motor Co.

As long as the power button works, most of us never even think about what type of electricity keeps our various devices up and running: direct current (DC) or alternating current (AC).

But it wasn't always that way. At the turn of the 20th century, Nikola Tesla, Thomas Edison and Henry Ford thought about energy a lot — and the decisions they made dramatically shaped the way we power our homes and vehicles today.

Tesla immigrated to the United States in 1884 to work as an electrical engineer for Edison in New York City. After resigning from Edison Machine Works over a wage dispute in 1885, Tesla began his own electric lighting company, focusing on AC. 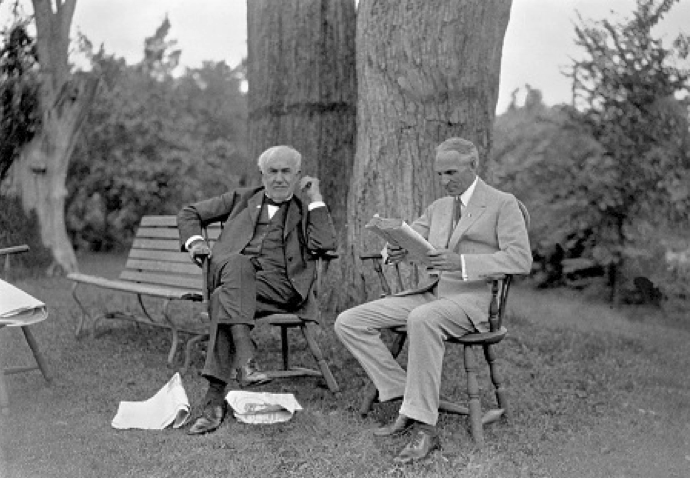 Ford
Henry Ford (right) had a longstanding friendship and working relationship with Thomas Edison, which began around the turn of the 20th century and endured into their golden years.

In 1888, George Westinghouse licensed Tesla’s U.S. patents for the AC induction motor and transformer, setting Westinghouse and Edison on a collision course as power utilities would need to choose between AC and DC. What ensued would become known as the "War of Currents."

Although most consumer devices today run on DC, it requires many smaller grids to transfer power at a stable rate over large areas. Unlike DC, AC could be stepped up to high voltages with transformers and stepped down again for distribution to users. As electricity expanded across the U.S., AC became the current of choice.

A few years later, a young Henry Ford was working under Thomas Edison at the Edison Illuminating Company as lead engineer. It was there that Ford introduced Edison to his experiments in self-propelled vehicles. The two would go on to become close friends despite an age difference — Edison was 16 years older — so much so that their families would vacation together into their golden years.

When Ford left the power plant and started Ford Motor Company in 1903, Edison had made inroads with battery technology and started offering nickel-iron batteries for several uses, including automobiles. Later that year, Edison announced plans to convert four large touring cars to electric power. By driving on electricity, everyone would have a fuel station right in his or her garage.

A number of developments contributed to the decline of electric vehicles and the increase in those powered by gasoline. Improved roads that required more range and the discovery of large reserves of petroleum in Texas, Oklahoma and California led to the wide availability of affordable gasoline, making gas-powered cars cheaper to operate over long distances.

Consider this: A gallon of gas cost roughly 7 cents, while electricity cost 15 cents per kilowatt-hour in the 1900s, making electric transportation nearly 10 times more expensive than the gasoline powered Model T. In fact, gasoline was so much less expensive than electricity that some farmers used creativity to power machinery with their Fords. Today, the national average for gas is $3, but electricity has remained relatively constant at 11 cents per kilowatt-hour: 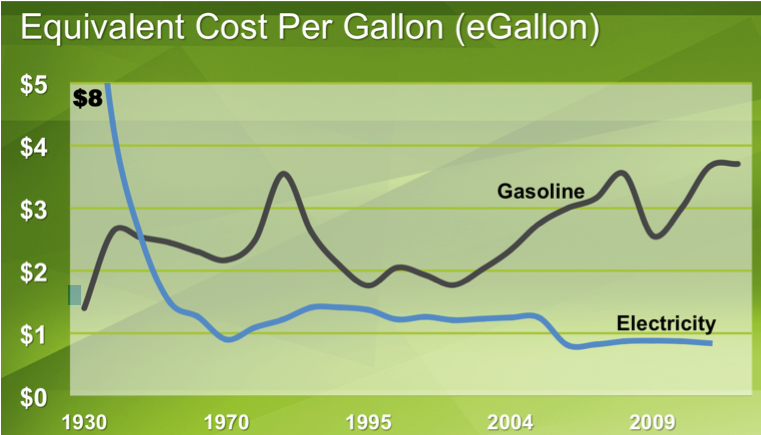 Gas prices have fallen to 10-year lows in many areas, but it still costs about twice as much to propel a vehicle on gasoline than it does on electricity. When using off-peak rates, gas costs about four times more.

In the early days of energy, the time was not right for DC or for electric vehicles. The infrastructure was not available, nor were enablers such as the smartphone, smart meters, the Internet or renewable energy.

But if you look around your house today, we are seeing a marked shift from AC to DC loads, and the pendulum continues to swing in the direction of DC. Driven by consumer electronics (all of which use DC), solar (which outputs DC) and electric vehicles (which have DC batteries), we are starting to see a proliferation of AC/DC converters in ougr homes.

Every computer, LCD television, game console or coffee maker uses DC converted from AC and each conversion causes a loss of energy. Even lighting, with the advent of LEDs, is moving toward DC. Ford
General Electric posted this advertisement for electric vehicles in Motor Age way back in 1912.
Have you ever walked around the home and counted the number of AC-DC converters that are plugged in around the clock? Have you ever touched one that was warm, like a phone charger? That's not the warmth of efficiency.

Estimates on converter loss for the average home vary between 3 percent and 14 percent depending on the content. With more than 4,000 billion kWh generated last year in the U.S., even a 3 percent savings could result in $13 billion worth of retail annual savings in electricity generation in the U.S. using DC power (not to mention the CO2 benefits).

The ingenuity and creative minds of Edison, Tesla and Ford resulted in three of America’s most powerful and influential corporations.

So when I walk through the doors of my Michigan-based office and unplug my Ford Focus Electric from the company’s GE charge station connected to a solar canopy, I reflect back on how we’ve come full circle on the AC/DC debate and how much history there is between these great founders.

Am I suggesting that we scrap the entire electrical grid, switch it all to DC and all begin driving electric cars? Of course not.

I’m simply asking this question:  If the brilliant minds of Edison, Tesla, Ford and others were tackling the electricity decisions back then — with the benefits we are enjoying of modern technology — do you think that our infrastructure and transportation would look the same as it does today?

Ford, Edison Team Up to Bring Plug-in Hybrids to Market

How Tesla and GE envision the future of energy