<p>The wireless carrier has set a series of ambitious goals regarding its own end-of-life electronics, as well as those it sells to individuals, and is taking a lifecycle approach to the e-waste challenge that could shift the entire industry.</p>

Sprint Nextel today unveiled a new, holistic environmental policy and a series of ambitious goals addressing its e-waste streams, on the same day that it received a sustainability leadership award from an electronics recycling trade group.

The goals announced today -- which include updates to existing goals as well as new stretch goals -- come as Sprint was awarded the "Sustainability Leadership Award" at the annual International Electronics Recycling Conference and Expo in Las Vegas. Sprint was recognized at the event for its industry-leading initiatives on addressing e-waste. Its new goals include:

Those goals set an ambitious path for the company -- for instance, in 2010 Sprint recycled 36% of all phones sold. But Darren Beck, Sprint's manager of corporate responsibility, said that there was a recognition internally of the importance to set the bar high.

"Many of the items within the policy confirm the practices we already had in place within the company," Beck said. "But we saw that there was a need to stretch ourselves along the commitments we've already made."

With the new policy, Sprint is taking a holistic approach to e-waste -- one that not only takes into account the entire lifecycle of a phone, from design to dismantling, but one that could have far-reaching impacts across the wireless industry.

Sprint is attempting to leverage its position -- between the manufacturers on one side and consumers and electronics recyclers on the other -- to bring green issues to the forefront of the market. 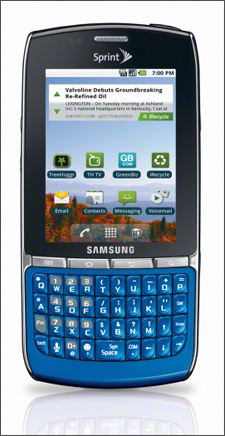 "The role a carrier can play is very important, because they sit in the middle," Beck explained. "What we hear from OEMs [electronics manufacturers] in our conversations is, if you're not asking for [green devices] the chance that it's going to pop up on its own is not likely."

Sprint has been promoting green phones in its lineups for some time, including the recently launched Samsung Replenish (pictured at right), as well as publishing a green design scorecard for reducing or eliminating potentially hazardous chemicals from phones and accessories. But in tacking sustainability from a holistic e-waste perspective, Sprint will look not just at how phones are design, but how they're built for dismantling.

Beck explained how Sprint can build on its relationships to both ends of a phone's lifecycle to make change. For example, Sprint hears the requests from recyclers that phone bodies use fewer screws, making it faster and easier to remove still-functioning components from otherwise discarded phones. Sprint can then pass those requests up the line to designers who can build that concept into future designs.

"Those kinds of conversations fare much better when you have a carrier in the middle to help facilitate them" Beck said, "otherwise both ends of the lifecycle don't tend to have the forum to have those conversations."

Sprint's leadership on sustainability issues has in recent years been embraced by senior executives, which has helped accelerate the company's pace. CEO Dan Hesse (read our profile of Hesse here: "Sprinting Toward Sustainability with CEO Dan Hesse") has just taken on the role of chairman of the CTIA, the wireless industry association. From there, Sprint hopes to be able to share its successes with other members of the industry, as well as learn from their own efforts.

All of which efforts are going to falter without a serious push on consumer behavior -- convincing gadget-hungry individuals that upgrading existing phones is a better option than "new every two."

One part of that challenge is making sure that phones aren't obsolete after two years. Included within Sprint's new environmental stewardship policy is a requirement that manufacturers offer "equipment of similar form, fit and function" for seven years, and provide replacement parts and service for five years after a product is originally launched.

Beyond convincing consumers not to abandon their phones before they're truly beyond use -- or refurbishing and reselling the phones that are still useable -- research has shown that most people will recycle a cell phone if there's a financial incentive behind it. To that end, Sprint will continue to promote, and possibly expand, its Sprint Buyback program.

In announcing the new policy and its long-term stretch goals, Sprint has taken only the first step toward achieving those goals. The company worked closely with partners ranging from BSR to UL Environment to shape the policies, and that those relationships will continue to build momentum within Sprint and the wireless industry as a whole.