<p>The St. Louis Cardinals have worked to achieve a 30 percent recycling rate, a 20 percent reduction in overall energy use and 10 percent cut in water use.</p>

[Editor's note: The greening of sports is a topic we've covered extensively at GreenBiz, ranging from college sports departments and professional leagues to numerous iconic events, such as the Super Bowl and the Olympics. As we see below with the St. Louis Cardinals, these sporting organizations are reaching beyond reducing waste and energy use to seize new opportunities for reaping the finacial rewards sustainability can offer, such as producing their own renewable energy and exploring the use of biofuels.]

The 2011 World Champion St. Louis Cardinals are accustomed to winning. With a total of 11 World Series titles under their belt -- second only to the Yankees -- it's no surprise that they set the bar high for all aspects of their game, even off the field.

In fact, with the help of NRDC's Sports Greening Project, after several years of work on resource efficiency in the areas of energy, water and waste, this year the Cardinals are proud to announce huge savings across the board.

With a 30 percent recycling rate, 20 percent reduction in overall energy use (and base power demand) and 10 percent cut in water use across all operations, the Cardinals are putting up some impressive numbers -- and you might say they've earned a "Triple Crown" for efficiency and environmental stewardship amongst clubs in the Central division.

In addition, the team recently unveiled a new 110-panel solar array atop a ticket building and concession area at one major entrance to the ballpark. The array will produce more than 30,000 kWh of energy annually, enough to power the stadium scoreboards, or all of the ballpark's retail stores, or cook about 4 million hot dogs!

One key to the Cardinals' energy successes to date is that they commissioned an "investment-grade" energy audit in 2011 to identify potential energy efficiency measures for the ballpark. They found close to 200 cost-effective energy improvements, despite the fact that Busch Stadium was just built in 2006. 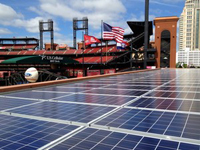 The Cardinals' operations team and Microgrid Energy, Busch Stadium's energy manager, have been working hard to make the ballpark a high-performance building. Based on the many energy saving opportunities they identified in their audit, they devised and are systematically implementing a comprehensive energy efficiency strategy, including no or low cost controls systems optimization and potential capital upgrades.

The team is a third of the way through executing their list of energy-efficient measures, with plans to complete them all. Here are some of the highlights:

All told, the Cardinals have invested several hundred thousand dollars and are saving that much each year. The return on investment for most of their initiatives is typically less than a year, allowing the team to use the savings to improve their operations and the bottom line in other ways. The Cardinals' triple-bottom-line approach to operating their stadium is embodied in their ongoing "4 a Greener Game" program that seeks to advance public health, environmental stewardship and education, and financial return.

Since its inception in 2008, the Cardinals' "4 a Greener Game" program has diverted more than 1,836 tons of discarded material to recycling and more than 575 tons of yard waste away from the stadium trash disposal and local landfills to composting. The program's success is due to the 550 conveniently-placed recycling bins around the ballpark, volunteers who collect recyclables during games and the maintenance staff who separate out additional recyclables post-game.

The Cardinals have been collaborating with NRDC's Sports Greening Project over the past four years to develop their impressive "4 a Greener Game" program.  This collaboration is part of NRDC's successful work enhancing the environmental performance of professional sports throughout North America.

By using technical expertise and sharing information about better industry practices, NRDC helps to make stadium and arena operations more sustainable. NRDC focuses on reducing energy and water use, promoting recycling and other environmental initiatives, and educating fans at the same time. The Cardinals are a great example.

Most recently, NRDC had the privilege of teaming up with the Cardinals to host a tour and discussion of the improvements they've made to their energy systems at Busch Stadium.  About 25 energy leaders from Missouri, including representatives from the local electric utility, state energy regulators, environmental advocates and the energy management team at Microgrid Energy, had the unique opportunity to hear a firsthand account of the energy efficiency work implemented at Busch Stadium. 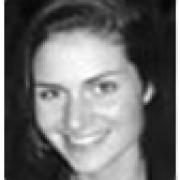 How collegiate sports can score with sustainability

See all by Alice Henly