Starbucks is brewing a goal to become "resource positive" on carbon, water and waste, while eventually moving away from single-use packaging. The aspiration, which lacks a deadline, comes alongside three early sustainability commitments for 2030, all set forth Tuesday in public letter from CEO Kevin Johnson.

Under the 2030 goals, which are preliminary and serve as the focus for the year ahead, the Seattle chain pledges to slash the following three areas each in half: carbon emissions; landfill waste from stores and manufacturing facilities; and the water it uses across coffee production and operations. That's a tall order for a brand that says it adds a new location every six hours on top of its 32,000 sites across 82 countries. But the ambition toward resource positivity will hinge upon even more radical shifts, many of which are beyond its control.

"As we approach the 50th anniversary of Starbucks in 2021, we look ahead with a heightened sense of urgency and conviction that we must challenge ourselves, think bigger and do much more in partnership with others to take care of the planet we share," Johnson said in the letter, describing "our commitment to pursue a bold, multi-decade aspiration to become resource positive and give more than we take from the planet. This is an aspiration that we take on recognizing it will come with challenges and will require transformational change."

The announcement happens as Starbucks' first chief sustainability officer, Levi Strauss veteran Michael Kobori, enters his second week on the job. It represents the results of a process that began after Johnson, former Starbucks COO, succeeded longtime CEO Howard Schultz in 2017. For the past year or so, Johnson has led a deep dive into some of the company's past sustainability hits and misses.

That included working with World Wildlife Fund (WWF) and Quantis to measure carbon, waste and water footprints across Starbucks' global supply chain for the first time. Among the surprises were the outsize impact of dairy — 21 percent of the global carbon footprint — followed by coffee, packaging and food. The nitrous oxide used for whipped cream makes up an entire 1 percent. All in all, Scope 3 emissions account for 96 percent of Starbucks' overall carbon footprint.

In exploring its impacts and setting new targets, Starbucks consulted with various thought leaders in sustainability, including William McDonough. In a statement, he praised the company for encouraging innovation "toward the dream of Cradle to Cradle: A delightfully diverse, safe, healthy and just world, with clean air, water, soil and power — economically, equitably, ecologically and elegantly enjoyed."

Starbucks' five aspirational "resource positive" goals reflect a confidence that emerging consumer attitudes around packaging waste and food are longtime trends, not fads. Critics are likely to call them frothy. The company aims to examine and test each point before setting timelines around them.

Here are those five strategies, with some progress that Starbucks has tracked in related areas:

1. "We will expand plant-based options, migrating toward a more environmentally friendly menu"

Replacing some animal-based products in a supply chain offers a lot of bang for the carbon-reduction buck, and it dovetails nicely with where consumer tastes are heading. Starbucks notes that in addition to offering almond and soy-based milks, it is testing oat milk at 1,300 Midwest stores. But what else does looking beyond meat mean for Starbucks' buttery pastries and sausage breakfast sandwiches? The menu is left up to the imagination at this point.

2. "We will shift from single-use to reusable packaging"

In seeking to slash landfill waste in half by 2030, Starbucks is embracing the circular economy and joining 450 other companies as a signatory of the Ellen MacArthur Foundation's New Plastics Economy Commitment. While the longer-term goal to ditch single-use packaging for good may be a dream just now, the company appears to be crossing its fingers that billions of consumers will fundamentally, gradually alter how they take their morning lattes.

More consumers are becoming outraged by plastic waste, and there was enormous public support for tossing the iconic green plastic straw in favor of a tilted cold-drink lid, which is being completed worldwide this year. Starbucks has made other modest improvements to cup designs since issuing cardboard sleeves in 1997 to prevent double-cupping hot drinks. Today it says packaging accounts for 85 percent of the waste leaving its stores. 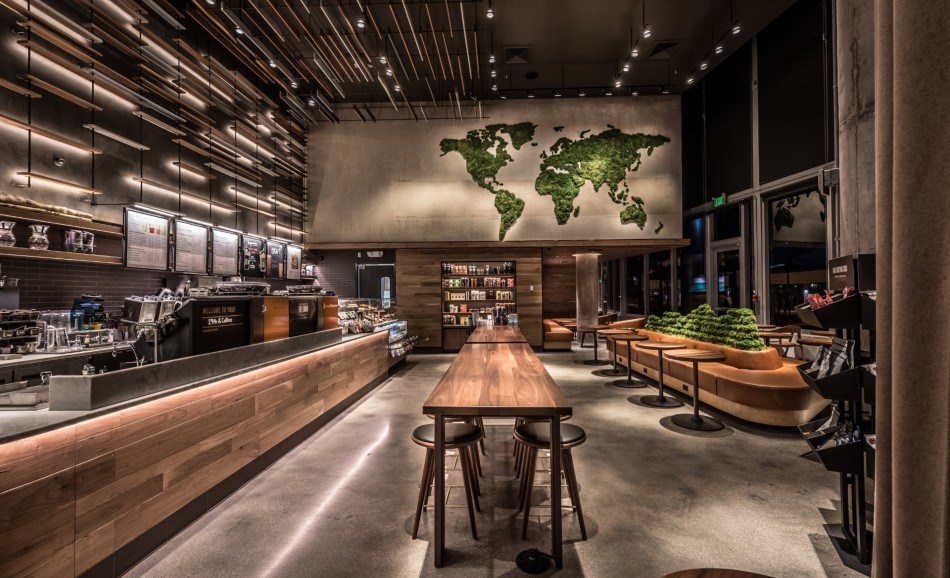 It's unclear what forms "reusable" packaging across Starbucks' beverages and snacks ultimately will take. Hints may be found among the 12 alternatives to today's throwaway coffee cups, including rental systems, that emerged in the 2019 NextGen Cup Challenge,  in which Starbucks participated alongside Closed Loop Partners and food giants including McDonald’s and Yum Brands. However, Starbucks considers recyclable and compostable cups, which figured prominently in that challenge, to be single-use items. So, BYOC or rent a cup?

Cash incentives have nudged some people toward cup reuse. Since 1998, Starbucks has offered a 10 cent discount to U.S. customers who bring in a cup for a refill. Within the first year of Starbucks providing a reward in South Korea, the practice of toting a cup to its stores grew by 178 percent within a year. In the United Kingdom, a "Grab Your Cup" jingle reminds customers to avoid the 5-pence surcharge on paper-based cups that already has encouraged cup reuse.

3. "We will invest in innovative and regenerative agricultural practices, reforestation, forest conservation and water replenishment in our supply chain"

There's a lot of action by Starbucks in this space already, but no time to waste for further improvements; 60 percent of coffee plants are threatened with extinction due to climate change and forest loss. Starbucks has invested $150 million toward the Sustainable Coffee Challenge industry collaboration. Ninety-nine percent of Starbucks coffee has been ethically sourced via C.A.F.E. (Coffee and Farmer Equity) Practices verification since 2015, developed over two decades with Conservation International. Starbucks uses funds from its three corporate sustainability bonds to support supply chain sustainability. The company says it buys 3 percent of the world's coffee from 400,000 farmers.

It continues to expand support for smallholder farmers at nine centers in Central and South America; Africa and Asia, and it open-sources the agronomic research. Meanwhile, it's embracing blockchain in order to trace all of its coffee in real time at some point this year.

4. "We will invest in better ways to manage our waste, both in our stores and in our communities, to ensure more reuse, recycling and elimination of food waste."

In addition to shunning take-and-toss packaging, Starbucks seeks to make a mark on reducing food waste, which accounts for 8 percent of greenhouse gas emissions. By the end of 2020, it seeks to donate all unsold edibles to food banks under an initiative launched in 2016 with Feeding America. The company reports giving away more than 20 million meals under the program so far. That said, most of Starbucks' edible waste goes down the drain; milk accounts for 36 percent of its total food waste.

5. "We will innovate to develop more eco-friendly stores, operations, manufacturing and delivery"

Starbucks says it's on track to build and run 10,000 LEED-certified "greener stores" by 2025, an effort announced in 2018. Equipment , mostly involving refrigeration, accounts for 98 percent of carbon emissions at its stores. More than 60 percent of Starbucks' global operations run on renewable energy, including all of the North American stores it operates. 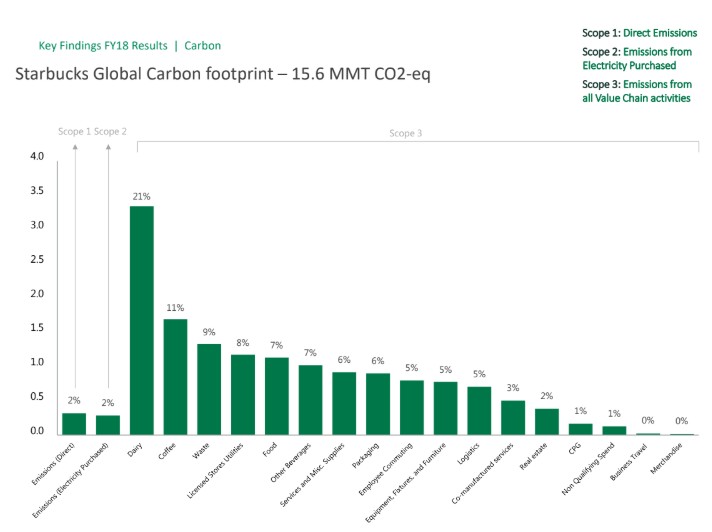 Starbucks can mostly control some of its new benchmarks, such as reducing emissions, as well as meeting ethical standards for coffee or LEED approval for buildings. But for other goals, the company remains largely codependent upon consumers.

A statement from Sheila Bonini, senior VP of private sector engagement at World Wildlife Fund, who also has engaged with Starbucks on today's goals, reflects as much. "This is exactly the kind of leadership we need to see from businesses — an opportunity to invest in their own future while making their global customer base a partner in this sustainability journey."

Yet Johnson's letter also blames Starbucks' past expectations of radical behavioral shifts by consumers for the failure of reusability and recycling goals it set in 2008. What's different now?

"What we learned was that, absent the same rigorous analysis, partnerships and investments that made us leaders in sustainable coffee and green building, our results underperformed our high expectations and underscored the need for a different approach," Johnson writes. Therefore, the next steps will involve intense market research and trials to separate the aspirational from the attainable.

"While we’re confident these strategies are directionally right, our eyes are wide open knowing that we do not have all the answers or fully understand all the complexities and potential consequences. We do know that this journey will require new innovations and creative ideas from entrepreneurs, non-profits, our suppliers, our licensees, our partners and our customers."

Amazon aims to help SMBs keep returns out of landfills

Amazon and Apple: A tale of two closed-loop visions

Can Bumble Bee and Nestlé hook the world on fishless fish?