Produce growers use many methods to keep fruits and vegetables from spoiling as they make their way through the "cold chain" that transports them from farm to shelf. That includes dipping them and spraying them in substances that ward off fungus. Hazel Technologies is pitching a less-intrusive method grounded in organic chemistry.

Its approach takes the form of packaging inserts that release essential oils commonly associated with many conifers called terpenes. Terpenes are used in many flavorings and fragrances, and they are thought to protect the plants that emit them by discouraging parasites and pests.

According to company lore, the idea was born over pizza at Northwestern University in 2014, the brainchild of then-graduate chemistry students Aidan Mouat and Adam Preslar. The two (now CEO and COO, respectively) were astounded and troubled by the high rate of food waste across the produce supply chain. Some data suggests up to 30 percent of what's harvested is never consumed. But the solutions require extraordinary measures that might be beyond smaller growers.

The inserts developed by Hazel Technologies also include ethylene inhibitors, which slow down the ripening process. The official active ingredient is 1-methylocyclopronene, which companies like AgroFresh have used to address this challenge for years. What makes the Hazel Technologies approach unique is its simplicity: it doesn't require big changes to the packing process or shipping containers. You just toss the sachets or paper inserts into the boxes, which can then be shipped across larger distances, expanding a farm's potential sales region. 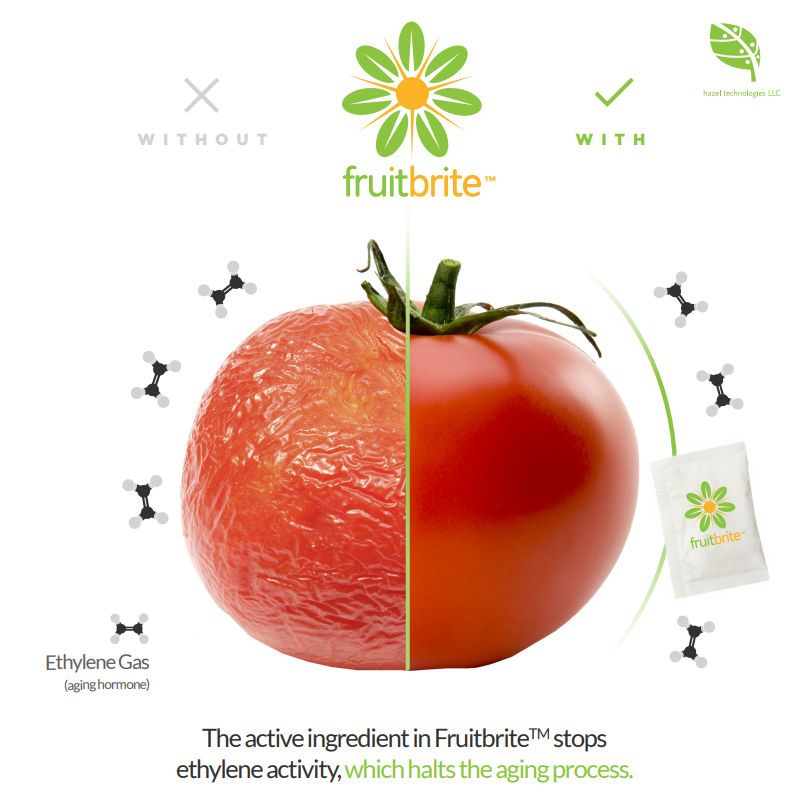 "If I'm a Florida grower of starfruit, it's hard to sell it in Vancouver," Mouat told TechCrunch in March. "This technology allows me to get it all the way there in shape where customers and consumers will want it."

That idea has helped the company attract more than $800,000 in seed funding, and a $600,000 development grant from the U.S. Department of Agriculture.  “Our early grower-packer partners have been able to reduce labor costs, increase grower returns, and access new markets with our products," Mouat said when Hazel Technologies disclosed the USDA funding.

It looks like there's even more money waiting in the wings. In late October, the company attracted the attention of investment group S2G Ventures at the AgSharks pitch competition. Although a deal hasn’t been announced, reports suggest S2G is considering a $2 million investment.

The product line was subjected to field tests throughout 2016, and Hazel Technologies is focusing most of its early sales efforts on produce growers in California, Washington, Oregon, Arizon and Florida where the produce industry is integral to the state economy, Flynn said. Two of its initial customers are partners of Dresick Farms International in the San Joaquin Valley that plan to use the inserts to transport melons to Asia.

The most unique part of the technology is that it's amazingly simple — you place the insert in the carton, and that's it.

"After testing the Hazel Melon inserts in our containers, we saw up to a 49 percent increase in marketable product after 30 days, a potential savings of as much as $10,000 per load," said Ross Van Vlack, vice president of sales and marketing for DFI Marketing. "The most unique part of the technology is that it's amazingly simple — you place Hazel Melon in the carton, and that's it. No equipment, no water, no packing house changes. We haven't seen something that works this well in our many years in the melon industry."

According to the company's marketing literature, the inserts are effective for up to two weeks. The sachets are biodegradable.

Right now, Hazel Technologies is specializing in Fruitbrite and Berrybrite inserts for several different categories of produce including melons, berries, tomatoes and lemons, notes Pat Flynn, co-founder and marketing lead for the company. The company's brochure suggests the inserts could be effective for bananas, asparagus, broccoli, mangoes or papayas.