And the winners are...EiP Technologies and 10Power!

The leaders of twelve up-and-coming companies delivered pitches at a fever pace of two and a half minutes each from our VERGE main stage this week — competing for exposure in the hopes of attracting investments and partnerships. Hundreds of audience members, both in the room and online, were invited to text-message their votes for the most compelling pitch.

Industry experts offered their perspective after the pitches each day, including Andrew Bebee of Obvious Ventures, Rhonda Clark of UPS for the first round of pitches Tuesday; and on Thursday Danny Kennedy of CalCEF and Nancy Pfund of DBL Investors.

Rhonda Clark, chief sustainability officer and VP of Environmental Affairs at UPS, said that when it came to adopting innovations, UPS looks to technologies ancillary to its core business of logistics management.

Most of the pitches provided software for data analysis and visualization to develop smarter methods to reducing waste. GreenBiz had selected the 13 finalists in advance based on video pitches.

First round of pitches

EiP Technologies of Oregon won with 33 percent of the votes. CEO Brad Burkle described the "Electronic Inertial Power" wind power technology as novel for both generating and storing energy. He said the small yet hefty wind machine design is ideal for generating power from turbulent winds on urban rooftops. "We've tested at 90 mile-per-hour wind and expect it to work in hurricanes," Burkle said. The modular design is built to operate at 8kW in near windless conditions with free kinetic enegy. The equipment weighs 2,000 pounds, and a flywheel effect keeps it going.

Ibis Networks is a paired metering device and software system that optimizes energy use with real-time data. It allows a company to measure plug-load energy consumption and uses the data to develop predictive analytics reporting for the ultimate goals of controling energy use and lowering costs.

The "air-traffic control for the end point of freight movements,” Voyage Control software aims to minimize truck congestion in urban areas. Just as airline passengers all leave a plane at once, trucks tend to arrive at their delivery destinations en masse, creating logistical bottlenecks. The app would help companies streamline the process, while reducing fuel waste and emissions. 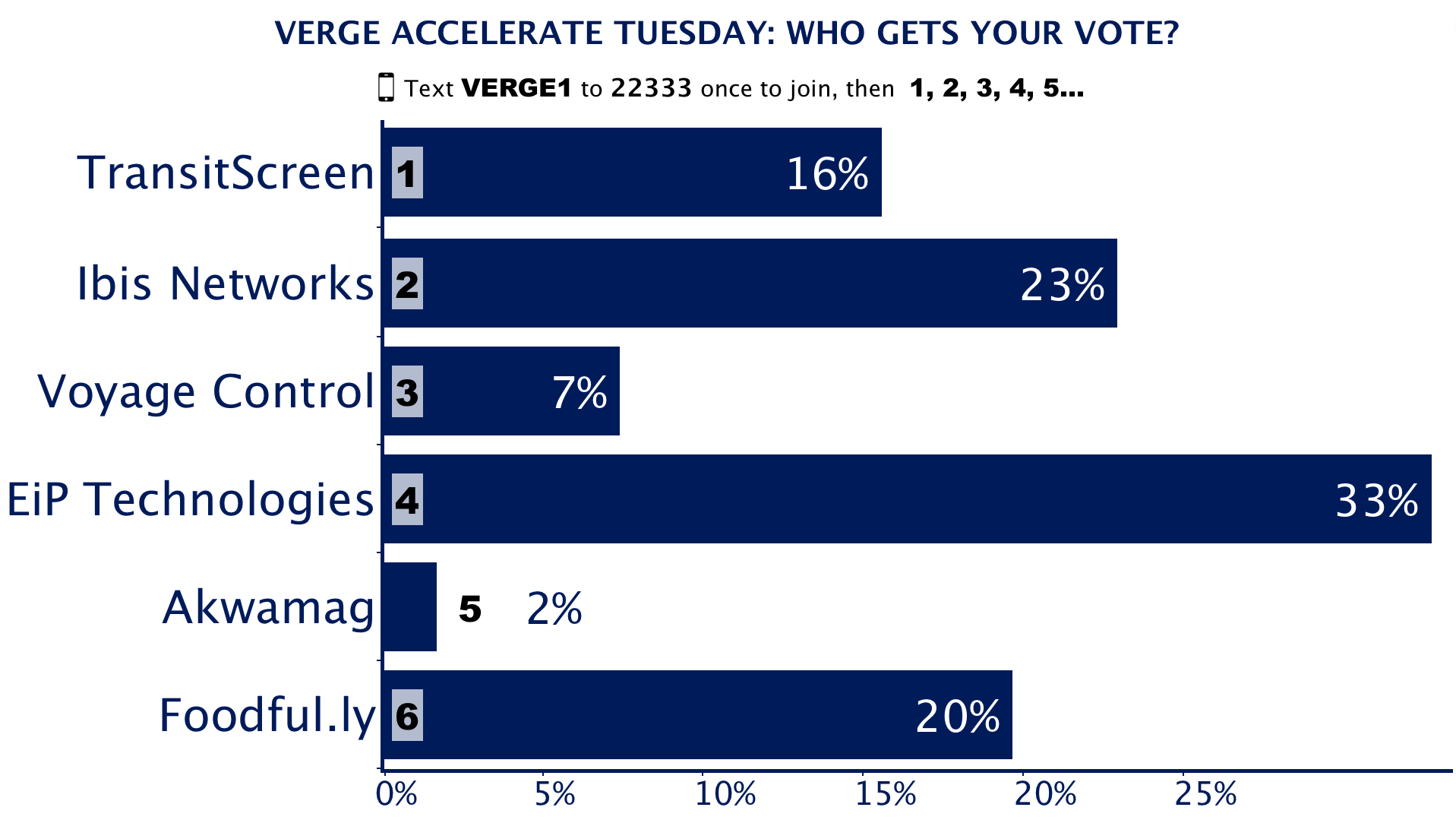 TransitScreen out of San Francisco displays real-time transportation information from public transit systems as well as walking directions. The data appears on TVs or computers in building lobbies as well as projections on city sidewalks. The company hopes to reduce urban congestion while encouraging more "walkable, bikeable cities of the future."

To introduce "water softener 2.0," Akwamag founder and CTO  Tuyen Vo described a sustainable alternative that would also cost half as much as salt softeners. It has already partnered with NASA for use on the International Space Station. Hard water affects 85 percent of Americans, he said.

Foodful.ly is a mobile app built to help reduce your personal food waste. The company aims to mitigate the 50 million pounds of food wasted every year in the United States. The app integrates a user’s purchase history from grocery receipts with data about when food will go bad to warn users and nudge them with recipes for the endangered ingredients.

Second round of pitches

Sandra Kwak presented day two's winning venture 10Power, which provides financing of renewable energy in developing communities that traditionally have limited connectivity to the power grid. It opens up access to clean technology, such as an undertaking in Haiti where 10Power provides both the access to photovoltaic panels and the training to install them.

Rogue Rovers, the self-described “mobile IoT for small scale farms” aims to empower farmers by opening up their access to data collection. It uses electric farm vehicles as cloud-connected data gatherers to bypass the connectivity difficulties associated with farming’s scale. The proposed product, the HerdDogg rover, has on-board sensing capability that gathers data from cows tagged with RFID chips that track location and health, essentially creating an Internet of Cows. 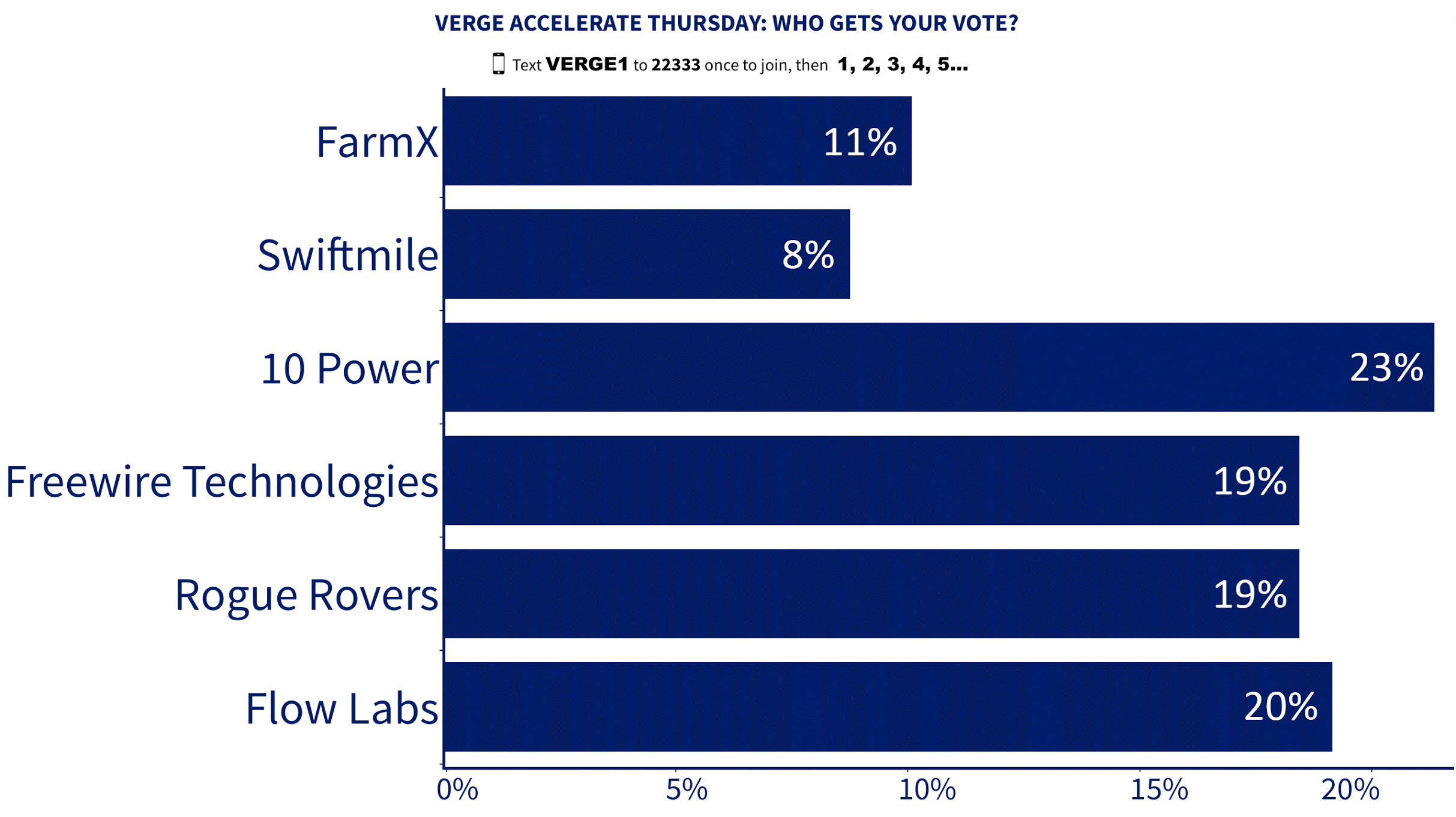 An EV charger on wheels. That’s what FreeWire Technologies aims to create with its Mobi Charger, a mobile battery for electric vehicle charging.

Swiftmile provides solar powered electric-bike and scooter sharing. The company hopes to replace the use of cars for short trips, such as the "last mile" between a public transportation stop and a destination. Swiftmile says half of all car trips go only 3 miles. The "Swiftstations" that dock its vehicles are solar-powered. A mobile app would allow for you to locate, rent, pay and return the light electric vehicles.

The United States wastes 1 trillion gallons of water a year. Flow Labs provides data gathering for water usage in large buildings such as hotels in order to aid in water usage optimization.

In the fight to overcome California’s drought, FarmX has developed smarter crop irrigation. It links a network of sensors planted in a field to a cloud network that complies the data and then uses the data to control irrigation.

Past VERGE Accelerate winners such as Strawberry Energy, Primo Wind, and PK Clean have gone on to become robust successful businesses.

This story has been updated to include day two of pitches.