The good news is that there's some good news. And that bad news is getting, well, less bad.

That’s one way to read this year's State of Green Business.

Our ninth annual report (download PDF), published today and produced in partnership with Trucost, continues our tradition of taking the pulse of corporate progress in sustainability, in the United States and around the world. It looks at both common measures (energy, waste and carbon) and some less-common ones (corporate reporting of natural capital profit or savings, for example, or companies’ low-carbon investments) over the past five years.

The report assesses the performance of U.S. companies in the S&P 500 index as well as those in the MSCI World Developed Index, which includes more than 1,600 companies in 24 developed markets. It also offers up the 10 trends for 2016 that we think you should be watching.

Let’s start with the trends. We’re pretty proud about our track record here, as we identify waves that are getting ready to crest. Last year, for example, we identified food waste, stranded assets and green bonds among last year’s trends to watch. All seemed to garner increased attention and action during 2015.

For 2016, we identify the circular economy, green infrastructure, carbon recycling, microgrids and the b-to-b sharing economy among our 10 trends.

For 2016, we identify the circular economy, green infrastructure, carbon recycling, microgrids and the b-to-b sharing economy among our 10 trends. All, we believe, will gain traction in the months ahead, becoming a growing part of the corporate sustainability scene.

Another is the growth of the "blue economy" — the newfound focus on the business of oceans, from mapping and mining to stewardship and "smart sailing" initiatives for the shipping industry. There’s a cottage industry emerging in turning ocean plastics into materials, transforming a pollutant into a product. And growing attention to sustainable fishing, including the human rights aspects of the commercial fishing industry. All told, a sea change in thinking about oceans.

The second half of the report are the numbers — a set of more than 30 metrics produced with Trucost — assessing how companies, in aggregate, are making progress on key environmental measures.

One promising area of progress is in the financial cost of natural capital impacts — the aggregate dollar value of environmental degradation caused by companies’ resource use and emissions.

One promising area of progress is in the financial cost of natural capital impacts — the aggregate dollar value of environmental degradation caused by companies’ resource use and emissions. Trucost calculated the value of hundreds of natural-capital inputs consumed (such as water or commodities like fossil fuels) and outputs generated (such as waste or greenhouse gas emissions) by companies’ operations and supply chains over the last five years.

After years of increases, the costs took a downward shift for the most recent year of data, suggesting that companies are becoming more efficient and environmentally responsible.

Still, business has a long way to go before declaring victory. In the U.S., the value of natural capital used by business exceeds $1 trillion per year, or 6 percent of national GDP, in terms of the environmental and social impacts associated with pollution, ecosystem depletion and related health costs. This number is almost $3 trillion for global companies.

If you put that number into context by comparing it to corporate profits, you get a troubling picture. The profits of more than half of all U.S. and global companies would be wiped out if these companies had to internalize and pay market rates for their environmental impacts.

The trends are more positive when it comes to other trends, including low-carbon investments, fossil-fuel divestment, sales of green bonds, investor use of environmental data, companies’ use of science-based targets and increased efficiency in energy, water and waste.

For example, 51 percent of U.S. companies and 49 percent of global companies publicly have disclosed greenhouse gas reduction targets, as of 2014, the most recent year with full data. That’s up about 10 points from five years earlier — and doesn’t count the relative deluge of commitments that were made last year in the run-up to COP21. Water-reducing targets are up even more.

The report also shows a modest but notable increase in the number of companies with science-based greenhouse gas emissions reduction targets, the beginning of a promising trend. So, too, companies’ reporting of the climate emissions from the use phase of their products: Growth roughly has tripled over the past half-decade.

Investors are finally waking up, and not just the so-called socially responsible ones. In the report’s foreword, Trucost CEO Richard Mattison cites the Montreal Pledge, which commits investors to measuring and disclosing the carbon footprint of their portfolios on an annual basis, which attracted 120 signatories representing just over $10 trillion in assets under management. 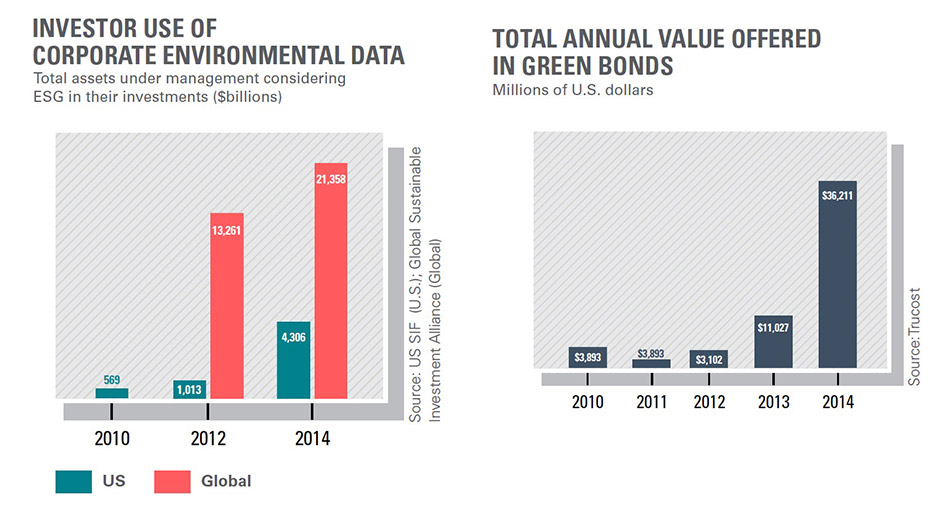 And the U.N.-led Portfolio Decarbonization Coalition, formed to help cut greenhouse gas emissions by mobilizing institutional investors committed to decarbonizing their portfolios, "smashed through its initial target of $100 billion, and is now overseeing the decarbonization of $230 billion in assets under management."

There’s also ramped-up efforts by giant pension funds in both the United States and Europe, along with the aforementioned market for green bonds, which has tripled to $42 billion in just two years. All told, it suggests that the smart money is looking for low-carbon and sustainable outcomes.

Said Mattison: “We can say that 2015 was the year that the investment community made critical commitments to finance sustainable growth."

And, he might add, 2016 could be the year when mainstream investors recognize that sustainability is no longer a "nice to do," but an opportunity for revenue growth, risk mitigation and other means to create shareholder value. That, indeed, would be a game-changer.