Adapted from the 2017 State of Green Business report. Download here.

It’s hard to imagine a time more hopeful and horrifying for sustainable business.

On the one hand are great achievements and milestones. The Paris Agreement on climate change was ratified last year, faster than any United Nations pact in history, a powerful confirmation of the importance the nations of the world attach to combating climate change.

Companies continued to ratchet up their commitments and achievements on renewable energy, greenhouse gas emissions, sustainable supply chains, water and land stewardship, the circular economy and other aspects of a sustainable enterprise. 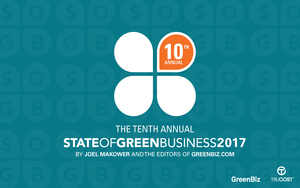 The indicators continue to be troubling. Global atmospheric concentrations of carbon dioxide are unprecedented compared with the past 800,000 years, according to the U.S. Environmental Protection Agency (PDF), even after accounting for natural fluctuations. Global temperatures continue to rise, and the 10 warmest years on record worldwide have all occurred since 1998. Other metrics — on coastal flooding, heat-related deaths, wildfires, polar sea ice, biodiversity and more — continue to go in the wrong direction.

The indicators continue to be troubling. The cost to companies and economies continues to rise, too.

The cost to companies and economies continues to rise, too. According to a report  last year from the OECD, air pollution will cause 6 million to 9 million premature deaths annually and cost 1 percent of global GDP by 2060. Meanwhile, more than 650 million people are living without access to an "improved" source of drinking water, according to The State of the World's Water 2016. Diarrhoeal diseases caused by unsafe water and poor sanitation are themselves the second biggest child killer — 315,000 young lives extinguished annually worldwide. Many of these illnesses and premature deaths represent future customers and employees.

In most regions of the world, market consequences from climate change are projected to be net-negative, says another OECD report. The macroeconomic costs from selected market impacts alone amount to between 1.0 and 3.3 percent of annual Gross Domestic Product by 2060. That year may sound a ways off, but it’s roughly the same time interval as the one between the end of the Vietnam War, in 1975, and today.

And that doesn’t factor in the economic consequences of the loss of natural capital, from crop pollination and pest control to biodiversity and flood protection, which companies rely on both directly and indirectly. All of which could further roil markets and the companies that operate therein.

The Paris Agreement provided hope that nearly 200 nations would work in concert toward mitigating many of those impacts. But the 2016 U.S. presidential election — and, to a lesser degree, the U.K.’s vote last year to leave the European Union — muddied the waters, promising to slow progress, perhaps significantly. As this report is being published, barely two weeks into the administration of President Donald Trump, much about future climate action and environmental protection remains unknown.

Companies and markets dislike uncertainty, and the coming year or two may see head-snapping policy shifts.

Companies and markets dislike uncertainty, of course, so the coming year or two may see head-snapping policy shifts as the public and private sector grapple with two seemingly unstoppable forces: the political momentum of an increasingly nationalist and protectionist world, and the wrath of a changing climate on a civilization ill-prepared to cope. Which force will dominate is anyone’s guess.

Corporate innovation, boosted by technology’s rampant pace, is enabling radical new levels of efficiency in materials, energy, water and other resources. The Internet of Things — the interconnected world of tens of billions of objects that can talk to one another, and to us, and make real-time optimization decisions — is enabling buildings, vehicles, power grids, factories and many other things to do far more with fewer resources. Corporate clean power continues to ramp, with prices ever dropping and efficiency steadily growing. Cities and regions are accelerating their quest to become greener and more resilient, luring corporations to relocate there amid transit hubs and culture centers. All of which provide a powerful bulwark against those seeking to slow or reverse progress in sustainability.

And the leading edge of companies are embracing "net-positive" strategies, where buildings, factories and supply chains create more beneficial impacts than negative ones. Interface, the Atlanta-based carpet company and a trendsetter in sustainable business, unleashed a new set of visionary goals last year, which included creating factories that function like the ecosystem they replace, providing such things as water storage and purification, carbon sequestration, nitrogen cycling, temperature cooling and wildlife habitat. The carpet company is starting this audacious journey with a single factory in Australia.

Net-positive buildings are beginning to sprout — a trend that seemed merely fanciful just a few short years ago. Today, the notion of buildings and campuses that generate more power than they use, or sequester more carbon than they emit, is within reach. Meanwhile, net-positive companies are on the near-term horizon.

The trend is as remarkable as it is inescapable: companies shifting from inadvertently negative impacts to deliberately positive ones.

The trend is as remarkable as it is inescapable: companies shifting from inadvertently negative impacts to deliberately positive ones.

Net-net, will the positives outweigh the negatives — in factories, economies, politics and all the rest — and do so at the scale and speed needed to address the planet’s greatest challenges? How much will proactive businesses counteract heel-dragging governments? Will market forces or ideologues rule the day?

These are among the questions to which we’ll be seeking answers during 2017, and likely beyond.

Matter of opinion: What the 2021 Earth Day polls reveal

Can sustainability save capitalism?