It’s déjà vu all over again.

The following is adapted from State of Green Business 2019, published today by GreenBiz in partnership with S&P Global Trucost.

"We find ourselves in uncharted waters."

That was part of our assessment 10 years ago, in 2009, when we published our second annual State of Green Business report. It was a time of both bright hope and dark uncertainty: On the one hand, there was regime change in America, a new presidential administration promising green jobs and renewed action on climate and other issues. There was a race by the global automotive industry to transition to electric vehicles — and growing action by companies to reduce the toxic components of their products and manufacturing processes.

So many emerging technologies and business trends of 2009 are still unfolding a decade hence, slowly but surely striving to find mass markets.

On the other hand, there was a global "great" recession, roiling companies in all sectors and pushing environmental issues to the back burner for some, and little progress on addressing climate change and its impacts, as greenhouse emissions continued to ratchet up.

As we wrote back then:

This year’s update is a mixed bag of encouraging and discouraging news. But on balance, despite a growing chorus of corporate commitments and actions, we’re less optimistic that these activities, in aggregate, are addressing planetary problems at sufficient scale and speed.

Suffice to say, it’s déjà vu all over again. So many concerns of 2009 are concerns again today, albeit with a heightened sense of urgency. So many emerging technologies and business trends of 2009 are still unfolding a decade hence, slowly but surely striving to find mass markets. So much progress we saw back then is still giving us hope.

But the headlines aren’t doing much to shore up our optimism. 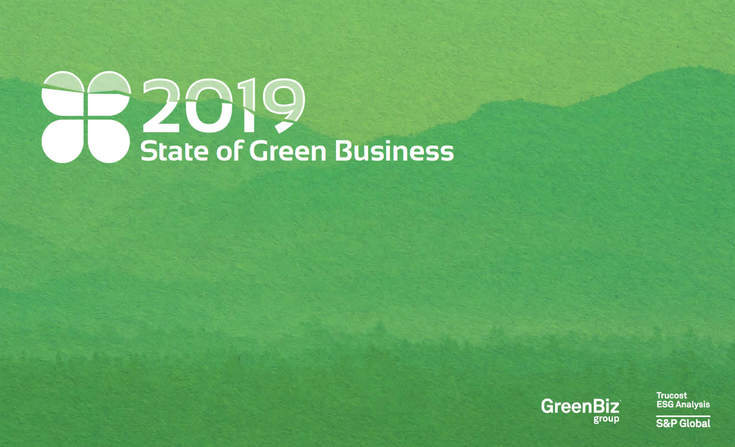 Let’s start with climate change, because pretty much everything else hinges on that. As 2018 wound down, we saw a raft of headlines that were, at best, distressing:

And that was over just two weeks in November.

The year saw wildfires in Greece and the United States, floods in Japan and Nigeria, a heat wave in Pakistan and mudslides in India — and enough human carnage from all these to provide a sobering preview of what might await us in the decades ahead. The news in 2018 wasn’t all bad. Renewable energy procurement continued on the impressive growth curve we’ve been watching for a decade. Electric vehicle purchases, while still a relatively small slice of the market, continued to grow as automakers around the world promised dozens of new EV models in the next few years, including electric buses and trucks. Eliminating plastic waste became a global cause, with efforts both symbolic (banning plastic straws in restaurants) and significant (corporate commitments to eliminate all single-use plastics). Ideas that not long ago seemed fringe — regenerative agriculture, a circular economy — were becoming commonplace, including within some of the world’s largest companies.

In the end, it’s another mixed bag, with many of the same challenges we’ve seen for years. "History doesn’t repeat itself, but it often rhymes," Mark Twain is reputed to have said. The history of sustainable business may be a verse-case scenario.

So, which will win out — the good news or the bad? The answer depends in part on the headlines of the day — more cataclysmic signs of a planet under siege or the hopeful signals of a world taking action?

At the end of the day, the questions remain: Are we moving far enough, fast enough? Does the ever-growing green activity in the business world represent a true transformation, one capable of adequately addressing pressing issues like climate change, air quality, the loss of species and the looming water crisis? Or is it merely nibbling at the edges of the problems? Reasonable minds can justifiably argue both sides.

Plus ça change — the more things change, the more they stay the same.