The state of private investment in conservation

Economists and businesses traditionally have viewed most natural resources as raw material inputs. To have ultimate value, these resources generally need to be processed, developed or otherwise modified. Recent years have seen investors asserting that the conservation of these resources has demonstrable financial value as well.

The growing community of conservation investors, surveyed for a new report released this week, is building the case — and a market — that shows that nature can provide quantifiable economic benefit by preserving or enhancing clean water, habitat protection or food and fiber provision.

Forest Trends’ Ecosystem Marketplace and a set of diverse partners — JPMorgan Chase & Co, the Gordon and Betty Moore Foundation, the David and Lucile Packard Foundation, the Nature Conservancy and NatureVest, Encourage Capital, Credit Suisse and Cornell University — recently released the 2016 edition of the State of Private Investment in Conservation Report that assesses and analyzes this growing trend of investments in the environment that yield both financial and environmental returns.

The chief findings are that the market is continuing to grow, and that investors targeting this space want more investment opportunities than they can find. Cumulative investment in conservation reached $8.2 billion through 2015, up 27 percent year over year since 2013. This represents roughly $1.6 billion in annual investments, with a doubling roughly every three years. Most investors reported expected internal rates of return (IRR) in a range of 5 to 9 percent. Notably, nearly a third of investors report IRR expectations above 15 percent.

The chief findings are that the market is continuing to grow, and that investors targeting this space want more investment opportunities than they can find.

When the first edition of this report was released in 2014, we wrote an essay in Stanford Social Innovation Review asking: Can impact investing help save the planet? We asked this question because growing demand for food, water and the resources that fuel our economies and sustain our communities is rapidly degrading the natural systems that we depend on. We need exponentially more capital and new, innovative models for conservation and sustainable economic growth. So the question of how much conservation impact investing can help bridge these capital and innovation gaps is worth sustained review and assessment.

The 2016 State of Private Investment in Conservation report provides stronger and more specific evidence for the trends we saw in the 2014 report (PDF).

Conservation impact investments can come in many forms — both in terms of investment vehicles and investment entities — from private equity firms to non-profits to foundations.

The 2016 analysis was based on a global survey of 128 fund managers, family offices, investors, banks and non-governmental organizations, the majority of which fund managers and fund-of-fund managers based in the United States and Europe. In-depth interviews were carried out with 31 more representatives from these and other organizations to supplement the data with case study examples, emerging developments and areas of opportunity.

Investments intended to return principal or generate profit while also resulting in a positive impact on natural resources and ecosystems. Not only that, but conservation impact must be an important motivation for making the investment; the impact cannot be simply a by-product of an investment made solely for financial return.

These conservation impact investments can come in many forms — both in terms of investment vehicles and investment entities — from private equity firms to non-profits to foundations. The report describes many of these investments made by a wide range of investors. 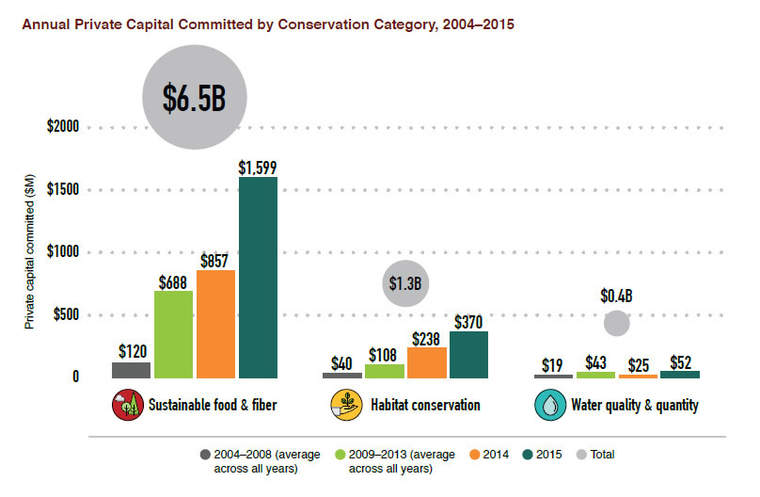 What does the future hold?

Measuring investment in conservation is not always straightforward. Assessing motivation and impact of investment can be difficult, and the ultimate decision about whether to include certain investments as conservation-focused can come down to a judgment call. Our bottom-up methodology, however, produces an overall amount that likely underestimates the full value of conservation investment.

Even taken broadly, the trends identified in this report suggest that we can expect continued, rapid growth of investments in conservation. In 2015 investors reported having raised $3.1 billion of still uncommitted capital. The majority of respondents planned to raise more capital in the coming three years than in the trailing three years.

Yet some fundamental challenges will need to be better addressed before these markets scale significantly more. The majority of respondents identified a lack of available transactions with attractive risk/return profiles as the biggest challenge to growth, indicating a need for more product development. Larger institutional investors cited relatively small transaction sizes and inexperienced management teams as further impediments.

Better understanding how impacts are measured and assessed by investors is a definite, clear area for future research. It was very difficult to create a coherent picture of how investors are evaluating their impact with the lack of standard reporting approaches and the range of the types of assets potential conservation outcomes from different investments.

The numbers indicate that impact investing in conservation is taking off, moving from a niche product to something that resembles an emerging market.

Caveats aside, the numbers indicate that impact investing in conservation is taking off, moving from a niche product to something that resembles an emerging market. More investors and more companies are working hard to originate, structure, distribute and invest in these transactions. Two years ago, we were not sure the identified trends would continue. This second report suggests that momentum continues to grow in this emerging investment area.

Of course, there will always be necessary conservation actions that do not produce a financial return, just as there will be financially lucrative opportunities that degrade the environment. None of us believes that conservation investing will be the panacea.

But along with the direct positive impact of such investments, we believe the mindset behind the increase in such investments may signify something even bigger. The growth of conservation investing could lead to a much more fundamental incorporation of the understanding that the health and resilience of functioning ecosystems have a value that must be incorporated into the capital system if we are to continue to thrive on this increasingly crowded planet.

The authors thank Eric Swanson and Kelley Hamrick of Forest Trends’ Ecosystem Marketplace for their leadership in conducting this research. We also acknowledge the other members of the advisory committee for the research report: Ricardo Bayon of Encourage Capital; Susan Phinney-Silver of the David & Lucile Packard Foundation; Marc Diaz of the Nature Conservancy’s NatureVest unit; John Tobin of Cornell University; and Fabian Huwyler of Credit Suisse.

Conservation impact investing is about to boom

How much bang for your buck does impact investing deliver?