The State of the Sustainability Profession, 2018

How much do corporate sustainability professionals make? What do they actually do? The latest research.

Every other year we release our State of the Profession report, albeit a little bit later than usual this time around. It’s chock full of good data on budgets, team sizes and salaries (we know that’s why you want to click here to download the report) as well as major themes around reporting, renewables and leveraging sustainability to create new business opportunities. And we’ll be talking about the results with sustainability executives from Cargill and Campbell during a webcast next week (register here). Rather than recap the report, let’s look at some of the successes and challenges in the profession. 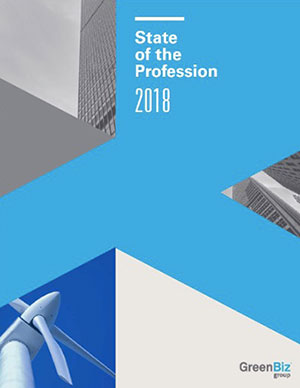 The sustainability profession has evolved significantly over the past 10 years, and it’s encouraging to see progress. More companies are communicating what they are doing. In 2017, 85 percent of the companies in the S&P 500 Index published sustainability or corporate responsibility reports. That’s a significant change from 2011, when the Governance & Accountability Institute found just under 20 percent of S&P 500 companies were publishing such reports.

One key finding in our research is that the profession continues to evolve from its tactical origins of reporting and stakeholder engagement to that of business strategy, change management and on-the-ground execution.

This was most evident when we asked respondents from companies with revenues greater than $1 billion whether their organization has one or more dedicated sustainability resources embedded in other parts of the organization. According to the responses, the past few years have brought a marked increase in dedicated sustainability personnel in facilities and supply chain departments — beyond the traditional strongholds in CSR and EHS teams.

We also asked for the first time whether programs would continue on their current trajectory if an organization’s sustainability leader and CEO both left. Only 17 percent said their program would not continue, while 58 percent said it would carry on (25 percent didn’t know).

Other encouraging findings from this year’s survey are associated with gender equity. Women from companies with revenues greater than $1 billion constitute a majority of managers and directors responding to our survey (57 percent and 52 percent, respectively) and 48 percent of vice presidents are women. Female managers and directors also out-earn their male counterparts, albeit by a small amount. The average pay for a female vice president is still 5 percent less than that for a male, but that’s a marked improvement from past years.

Before the community collectively claps ourselves on the back, let’s acknowledge the challenges and barriers ahead. These aren’t just the gutting of the U.S. Environment Protection Agency, the distrust of science, what-about-ism and the false-equivalency narratives that require two sides to any story regardless of merit and the contentious political environment here and elsewhere in the world. I’m talking about the challenges and barriers within the profession itself.

After dinner the other night, a doctor — a regular reader of the New York Times and politically moderate — asked me if companies that GreenBiz reports on are really doing anything. It was a fair question, and I struggled with an answer. I could share numerous anecdotes but found it difficult to identify major impacts that have occurred because a company has a sustainability officer.

We see budgets rising slightly, but most sustainability leaders will tell you privately that their programs are still underfunded. We note in our research that reporting is becoming more context-based and that investors seek decision-useful information. But ESG-based decisions to invest or divest, if they are occurring, are not being reported widely. And while gender pay equity has improved, there is a persistent gap in the sustainability profession when it comes to race. That is, the sustainability profession is still pretty white.

The biggest challenge for many sustainability executives is how to change a system when you are the system.

The biggest challenge for many sustainability executives is how to change a system when you are the system. As companies embed sustainability resources inside the organization, will that make teams more complacent and less of a force of internal activism?

I look forward to reading Anand Giridharadas’s new book "Winners Take All: The Elite Charade of Changing the World." His recent NYTimes editorial calls out the wealthy who claim to be changing the world, noting, "Of course, world-changing initiatives funded by the winners of market capitalism do heal the sick, enrich the poor and save lives. But even as they give back, American elites generally seek to maintain the system that causes many of the problems they try to fix."

Giridharadas is not specifically calling out sustainability professionals but his perspective — that elites are using their wealth to address symptoms rather than effecting systemic change — should challenge all of us in the profession to consider whether our corporate efforts are focused on truly creating a more sustainable world or merely making it a little better.

Unless we can tell compelling stories linked to a strategy and a societal benefit (for stakeholders) and an EBIT benefit for investors, we won’t reap what we’re sowing.

Don’t get me wrong, change is occurring. The question is whether we’re going far enough, fast enough. I’d be grateful for your thoughts.

Sustainability gets schooled at work