COVID-19 has stalled legislation but efforts to increase energy efficiency are expected to resume once the pandemic is over.

Before the COVID-19 pandemic adjourned state legislative sessions, several states took significant climate action this year by leaning on local utilities to ramp up programs that help customers save energy. Their tool of choice? The energy efficiency resource standard (EERS), a policy that requires utilities or statewide administrators to hit long-term energy savings targets by ramping up energy efficiency programs for homes and businesses.

This month, Virginia became the first state in the South to enact an EERS in a decade. New York became the second state in the nation after Massachusetts to set an EERS designed to encourage all forms of building decarbonization, including electrifying major building equipment. New Jersey and Washington, D.C. are also taking critical steps to implement recent EERS legislation as a key part of their climate efforts, and Maryland, Illinois and Minnesota are considering legislation to expand their existing EERSs.

State and city efforts to reach Paris Agreement climate targets will require major contributions from energy efficiency to cut greenhouse gas emissions equitably, cost-effectively and reliably. And states are recognizing this. Many states that took action in 2019 toward making their electricity sectors carbon free by 2045–2050, such as California, Colorado, Maine, Nevada, New Mexico, New York and Washington, have a significant EERS in place to ensure that utilities are pulling their weight.

Already this year, several states either have created new efficiency policies or strengthened existing ones:

Virginia: This month, both chambers of Virginia’s legislature passed the Virginia Clean Economy Act, which establishes an EERS for investor-owned utilities in the state. That’s a key part of the bill’s effort to reach 100 percent clean energy by 2050. Gov. Ralph Northam is expected to sign the bill soon.

The EERS requires that in 2025, Dominion must save electricity equivalent to at least 5 percent (relative to 2019 sales) via efficiency measures implemented that year plus ongoing savings from measures implemented in previous years that are still saving energy. Appalachian Power Company must hit 2 percent. These are total electricity savings targets in 2025. We estimate that the utilities’ incremental annual savings targets will be about 1.2 percent per year, making it the 15th strongest one in place among the 27 states with an EERS (see map below). We estimate that the EERS alone will avoid more than 7 million metric tons of greenhouse gas emissions over four years and would continue to reduce emissions as measures continue to save energy. 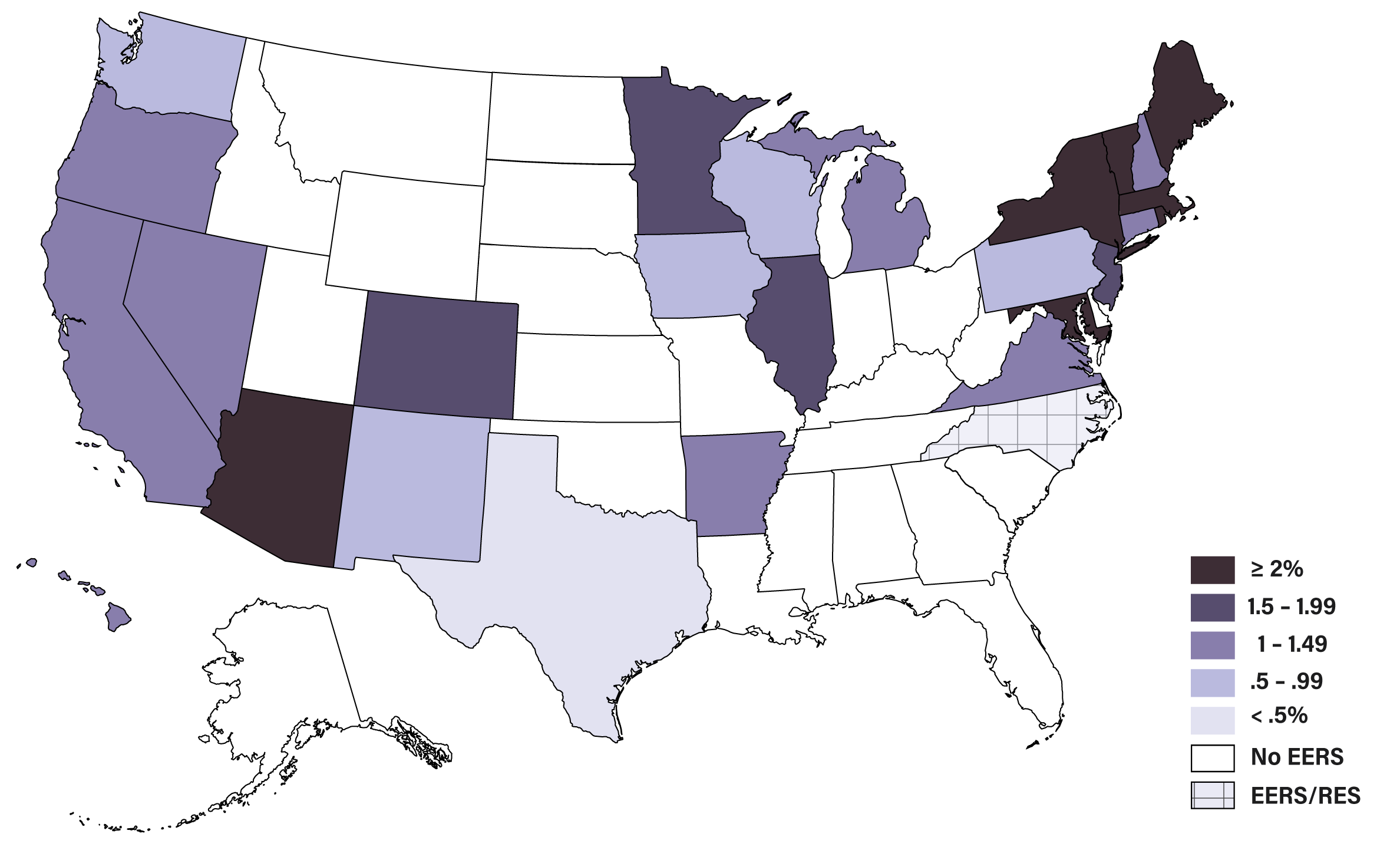 The bill also sets up a process to strengthen the EERS after 2025. After that year, the State Corporation Commission will adjust energy efficiency targets every three years. Importantly, utilities will have to prove they are hitting those targets before they are permitted to build new fossil fuel plants.

Of course, there’s a lot of implementation work to do to hold utilities accountable to the targets. And while the standard is not as high as leading states saving electricity at 2 percent per year, it sets Virginia on a strong path.

New York: In January, New York’s public service commission promulgated rules to implement their energy efficiency target, issuing an order (automatic PDF download) setting ambitious energy efficiency and building decarbonization goals. This order moved forward a portion of the state’s New Efficiency: New York efforts to scale efficiency to meet its 40 percent reduction by 2030 climate goals as recently codified in the 2019 Climate Leadership and Community Protection Act. New York is pairing these utility customer offerings with building codes and appliance standards, government lead-by-example programs, weatherization programs and market transformation efforts. The approved programs are projected to save more than 35 TBtu of energy through 2025, and alongside the other parts of New Efficiency: New York aims to deliver nearly one-third of its initial greenhouse gas emissions goal of a 40 percent reduction by 2030.

Importantly, this is one of the first states implementing a next-generation EERS which encourages utilities to use a broader set of resources, including beneficial electrification, to cut greenhouse gas emissions. New York’s approach is a fuel-neutral target measured in Btus. In addition, New York set separate targets within the broader fuel-neutral portfolio for efficiency savings by 2025 of 3 percent for electricity and 1.3 percent for gas. New York further committed to implementation of building decarbonization with a specific goal to deliver 3.6 TBTu of savings from heat pumps, a key technology for efficient space and water heating. Regulators also directed their use as an important alternative to be considered in natural gas supply-constrained areas.

The straw proposal creates a system of accountability and rules of the road to meet the state’s EERS targets, shifting much of the responsibility from the state to utilities. Staff has requested comments by April 13, and the BPU will finalize those rules so that utilities can submit their plans for regulatory approval this year.

In parallel, Gov. Phil Murphy published an ambitious statewide and economy-wide Energy Master Plan (EMP) laying out a pathway to 100 percent clean energy by 2050. That plan emphasizes energy efficiency in climate mitigation, with pillars focused on building decarbonization, reductions in transportation consumption, and participation by low- and moderate-income and environmental justice communities.

Getting utilities to deliver the energy-saving improvements needed to meet state, city and utility climate goals requires strong energy efficiency resource standards, together with a host of other tools.

Further action on EERS in 2020

Washington, D.C.’s Public Service Commission is also grappling with how to set up energy efficiency rules that allow utilities and a third-party administrator to contribute to the district’s climate goals. Last month, the commission issued a working group report (PDF) and collected public comments. New rules to create and implement energy efficiency targets are expected in coming months.

In Maryland, the legislature considered the Climate Solutions Act, which included provisions to increase the state’s EERS annual targets to 2.8 percent of sales, and HB 0982, which would set an annual energy savings target for low-income energy efficiency of at least 1 percent. However, the climate bill and the low income energy efficiency bill stalled in the recent rush to adjournment in response to COVID-19.

A bill in Illinois is similarly on hold while the legislature is adjourned. That bill, the proposed Clean Energy Jobs Act (CEJA, or HB 3624) would move forward ambitious climate and energy targets, including a 100 percent renewable energy by 2050 target and extension of their electric EERS to natural gas energy efficiency as well. CEJA has received subject-matter hearings in both the House and Senate, and still faces committee and floor votes in both chambers when the Illinois legislature reconvenes. Those gas targets would reach 1.2 percent cumulative persisting annual savings starting this year and strengthening to 13.5 percent by 2035.

Elsewhere in the Midwest, DTE filed a revised integrated resource plan that accepted the recommendations of the Michigan Public Service Commission to increase energy efficiency, setting incremental annual energy savings goals to 1.75 percent in 2020 and 2 percent in 2021. Legislators in Minnesota also considered updates to its EERS, but efforts were delayed (automatic PDF download) due to COVID 19.

Getting utilities to deliver the energy-saving improvements needed to meet state, city and utility climate goals requires strong energy efficiency resource standards, together with a host of other tools. These new policies are a major step in the right direction for the climate and customers.

With the shift toward electrification, decoupling remains key for driving decarbonization

See all by Rachel Gold