Is cyber-shopping terrible for the environment?

Some say yes, with all those trucks heading out into suburbia to deliver your latest gadget, fashion garment or book. But online retailers insist theirs is the greener delivery route — much better than you driving to the store.

So, who is right? And are there even better ways?

This really matters for the climate. Online shopping makes up one in seven retail purchases worldwide. Its value in 2019 will be a staggering $3.5 trillion, a figure that is rising by more than a fifth every year.

How much of the total carbon footprint of what you buy is attributable to delivery varies hugely. But wherever your latest purchase comes from — whether a Chinese factory or a field in your home state — transport from the store or warehouse to home likely dominates the delivery footprint, says Alan McKinnon, a professor of logistics at the Kühne Logistics University in Hamburg, Germany, and author of a new book "Decarbonizing Logistics."

Wherever your latest purchase comes from, transport from the store or warehouse to home likely dominates the delivery footprint.

What logistics folks call the "last mile" is usually the most energy-intensive stage, McKinnon and colleague Julia Edwards have pointed out (PDF), "and typically generates more CO2 emissions than all the upstream logistical activities."

It is also where the difference between online and in-store shopping is greatest — and McKinnon says most times delivery is best. A typical home delivery round of online purchases in Britain consists of 120 drops on a 50-mile round. That round produces some 50 pounds of CO2, or just over 6 ounces per individual delivery. If you went to the store, the typical drive would be around 13 miles there and back, which would generate 24 times more CO2. So you’d have to pick up 24 items to break even, he says.

That’s the theory. In the real world, the difference is much less, says manufacturing technology specialist Dimitri Weideli, who did an environmental analysis of online shopping while a research associate at MIT in 2013. For instance, 12 percent to 60 percent of home deliveries have been reported to fail first time. Either the van has to make a second and even third run, or customers end up driving to an out-of-town warehouse to pick up the product. Also, typically,one-fifth of products are returned, for whatever reason. Every false move increases the carbon footprint.

Just as bad, our growing love of speed deliveries almost triples the footprint of online delivery, says Weideli. That is because your supplier no longer has the flexibility to bundle multiple orders into a single delivery, and because it sends out vans less full and to travel farther per delivery than they would if you were willing to wait a bit longer for your purchase to arrive.

Weidel says such "impatient" cyber-shoppers have the worst carbon footprint of all. But even allowing for them, in general, whether buying laptops or Barbie dolls or T-shirts, he wrote in an analysis he did as a research associate at the MIT Center for Transportation and Logistics in 2013, "online shopping is the most environmentally friendly option." (PDF)

This assumes the comparison is with conventional shoppers who make special trips to the store for single purchases. Many don’t do that.

Of course, this assumes the comparison is with conventional shoppers who make special trips to the store for single purchases. Many don’t do that. We walk, bike or take the bus. Or buy many items on a single shopping trip.

In a bus ride, you share the emissions. On a typically half-empty bus, your share may still be greater than the emissions for a home delivery — seven times more if you are only buying one item, says Patricia van Loon, based on her research at Heriot-Watt University in Edinburgh, Scotland. But since the bus would have been on the route regardless, you haven’t added to the actual emissions.

If we can shop better, can online retailers deliver better too? That last mile is still a source of great (and costly) inefficiency for them, say logistics analysts. It’s where both dollars and carbon emissions can be saved.

So they are trying. Amazon wants half its shipments to be "net zero carbon" by 2030. But how?

Electric vehicles are one possibility. With no tailpipe emissions, they reduce transport’s contribution to urban smog. But their carbon footprint depends on how their electricity is generated. Right now, an electric vehicle is a lot greener in Vermont than in coal-burning West Virginia.

How about drones? They would mostly deliver one package at a time. But even flitting back and forth from the depot, drones sometimes still could reduce carbon emissions relative to delivery trucks, according to Anne Goodchild of the University of Washington. They are likely to work best with light, urgent deliveries, such as medicines, food or mail, and in confined high-demand areas such as university campuses. 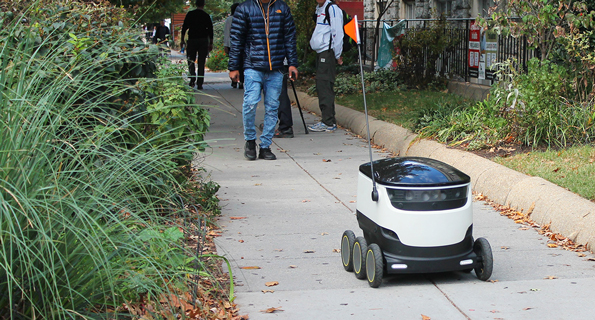 But staying aloft for long with a heavy load is energy-intensive. Drones could be combined with trucks that drive to local transport nodes, then hand over to drones for the last mile.

Or perhaps ground-based robots? This year, both FedEx and Amazon announced plans to deploy these smart, autonomous hampers-on-wheels along our sidewalks, dodging pedestrians and crossing at the lights. Lowe’s already has plans to deploy with FedEx, and FedEx says it is talking to Pizza Hut and Walmart about doing their deliveries as well.

Some say low-tech is still the best route to low carbon. Many European cities have companies such as Deliveroo using bicycle couriers for fast, zero-emission meal deliveries from local restaurants. The system could be extended for other goods. Ford recently developed software that could summon bike couriers to take parcels in a suburban London neighborhood the last mile from truck to front door.

Lockers in shopping malls also get around the last mile problem for online retailers. Customers are given a code and pick up their own package. But if you drive there, the carbon gain is lost. 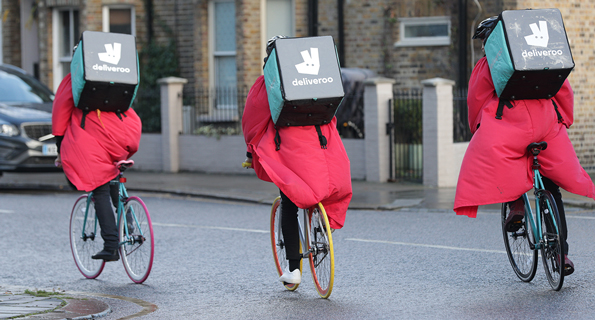 The new kid on the block is crowd-shipping — hitchhiking for parcels. Start-ups such as Roadie promise to "connect people who have stuff with driver already heading that way." Drivers make bids to deliver. Right now in some places, half of all crowd-shipping trips are made specially for the delivery, while another third take long detours. So the potential carbon saving disappears. But the more people join in, the more efficient it could be.

The bottom line? Online shopping can be greener than driving to the store. Novel last-mile alternatives to conventional delivery trucks stand to make it even more environmentally friendly.

But the devil is in the details. If we bundle our orders, and avoid the speedy delivery option, we boost the environmentally friendly quotient. (Imagine if we were offered a "green shipping" button when choosing dispatch options?) Other tips for reducing delivery’s environmental impact: Do be in when the courier calls. Don’t buy on a whim and then take up the "free return" option.

Oh, and don’t binge on stuff. Some say the real danger from online shopping is it encourages us to buy stuff we wouldn’t otherwise. The purchase that doesn’t happen has the lowest delivery carbon footprint of all.

Collateral damage: The environmental cost of the Ukraine War

Why methane is a large and underestimated threat to climate goals

The climate is changing. How are central banks responding?