U.S. fossil fuel companies and their shareholders are exposed to $412 billion in potentially unusable assets from oil, coal and gas projects on their books that may never be needed, according to a report released today.

That vast U.S. exposure is part of $2.2 trillion globally in excess in fossil fuel drilling or mining projects that could well become stranded assets on the books of various private and state-run companies, according to Carbon Tracker. It issued the report, "The $2 trillion stranded assets danger zone: How fossil fuel firms risk destroying investor returns," late Tuesday.

A confluence of political and economic trends makes these assets look increasingly unlikely to be profitable to develop, as in to drill or mine. One is the growing international consensus about the importance of keeping global temperatures below 2 degrees Celsius, the premise upon which the COP21 negotiations in Paris are based.

If a climate agreement is reached at the U.N. meeting in December, nations are likely to implement policies to mitigate carbon emissions and government-run utilities may forgo coal projects and maybe some oil exploration projects. Already, abandoned coal mines are multiplying.

On top of that, economic trends of falling prices in equipment and installation costs of renewable energy deployment, consumer interest in purchasing electric and hybrid vehicles and innovation in battery storage of generated electricity are making oil and coal exploration uncompetitive.

If the industry misreads future demand by underestimating technology and policy advances, this can lead to an excess of supply and create stranded assets. This is where shareholders should be concerned.

"If the industry misreads future demand by underestimating technology and policy advances, this can lead to an excess of supply and create stranded assets. This is where shareholders should be concerned — if companies are committing to future production which may never generate the returns expected," reads the report by Carbon Tracker, which provided an early copy to GreenBiz.

The financial returns of developing coal and oil reserves already have fallen off, due to the falling market prices for those commodities. Oil prices fell by half in 2014 and have stayed below $50 a barrel this year. But oil prices are subject to so many geopolitical forces that they zigzag — and rose 3.4 percent Tuesday on news that the Turkish government shot down a Russian fighter jet. According to the Associated Press, U.S. crude climbed $1.42, or 3.4 percent, to $43.17 a barrel in New York on Tuesday and Brent crude, a benchmark for international oils, added $1.53 to $46.36 a barrel.

But U.S. oil companies are bringing on a great deal of new capacity, thanks to the shale oil boom. Carbon Tracker says at least 16 percent of this might turn out to be excess, or stranded assets. 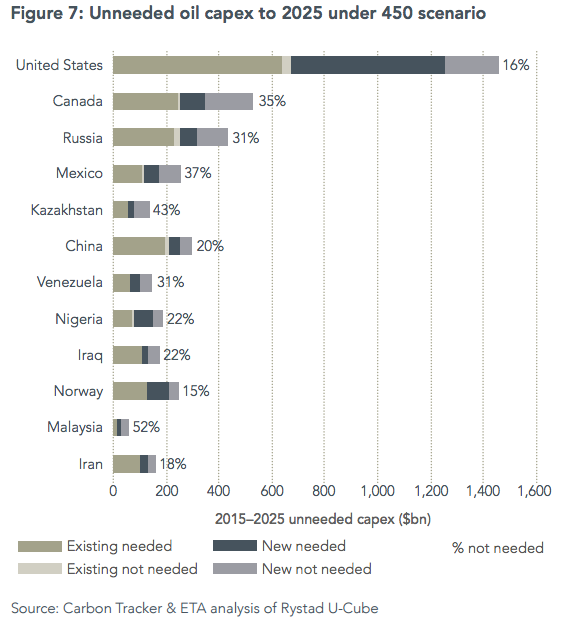 U.S. oil companies have $1.5 trillion in planned capital expenditures in oil over the next decade. Carbon Tracker predicts that the market will absorb much of that because existing oil fields require increased drilling just to keep producing a level amount. But still 16 percent, or $412 billion, is likely be extra or beyond what the market can absorb.

Coal prices, too, have sunk and in coal's case it is because of falling demand for coal, particularly in export markets. That make new mining not attractive in many places, such as the United States. Coal futures prices hit a 12-year low in August, according to Reuters, caused largely by a drop in demand from China and India.

China, which uses more coal than any other nation, and with the most coal production under development, faces a huge risk of excess capacity and stranded coal assets. The Chinese government — grappling with a populace demanding cleaner air — has said it would structure energy supplies such that carbon emissions peak by 2030 and then start decreasing. It has invested huge sums into renewable energy and stated that coal production would peak in 2020.

Mark Fulton, advisor to Carbon Tracker, former head of research at Deutsche Bank Climate Change Advisors and co-author of the report, said: "Our work shows thermal coal has the most significant overhang of unneeded supply in terms of carbon of all fossil fuels on any scenario. No new mines are needed globally in a 2 C world." 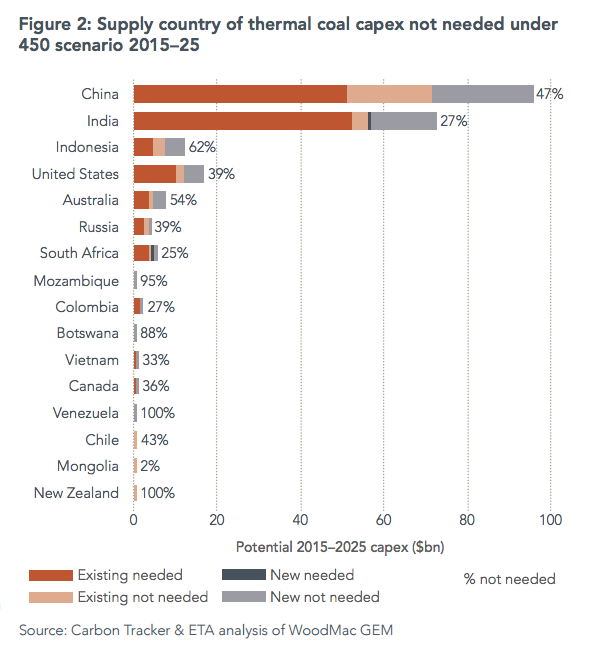 "No new coal mines will be needed, oil demand will peak around 2020, and growth in gas will disappoint industry expectations," the report reads.

Carbon Tracker said energy companies must avoid projects that would generate 156 billion tons of carbon dioxide to abide by the carbon budget in the International Energy Agency’s 450 demand scenario, which it produced after the U.N. Climate meetings in Copenhagen and Cancun to describe a worldwide energy path with at least a 50 percent chance of meeting the United Nations' goal of keeping warming below 2 C to avoid dramatic climate change.

"In the 450 scenario oil demand peaks around 2020. This means the oil sector does not need to continue to grow, which is inconsistent with the narrative of many companies," Carbon Tracker's report stated. Not only does it say that future projects worth some $1.3 trillion globally are not needed but that also $124 billion planned spending on existing projects is not needed if the world stays within a 2 C scenario. That means some 33 percent of not-yet-developed oil supplies should be left in the ground, and 44 percent of new investment is not needed.

The companies that face the most exposure to stranded assets include U.S. oil firms Exxon Mobil and Chevron, as well as Royal Dutch Shell, Pemex and coal miners Peabody, Coal India and Glencore, the report said. 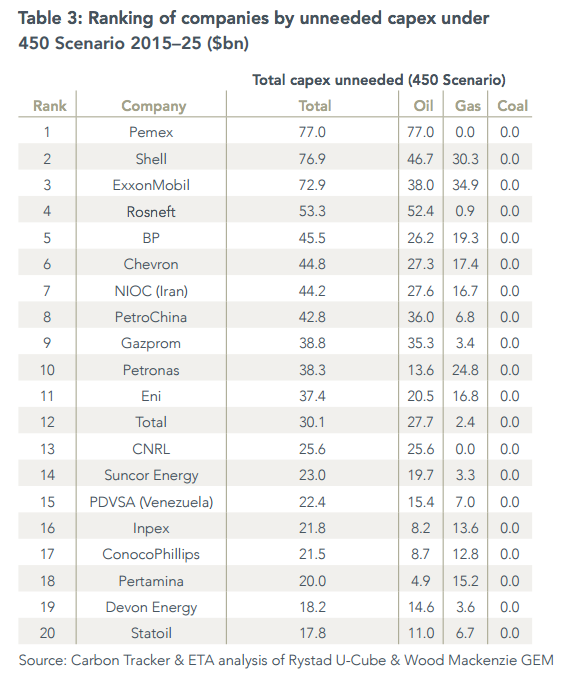 Because oil wells produce less oil over time, oil companies will need to invest in bringing some new wells online just to keep production at current levels, Carbon Tracker said. But it also expects oil demand to peak in 2020, five years from now, given the economic trends and innovative advances favoring its alternatives.