Stress Test: How banks are looking at climate risk

From stranded assets to increasing credit risks to missed opportunities in renewables, climate change could have a profound impact on banks.

But, according to a recent report by Boston Common Asset Management [PDF], many banks are falling behind when it comes to assessing climate risk and only a few banks are performing environmental "stress tests."

The report shows, however, that banks have improved in adopting climate strategies, and 23 out of the 28 banks surveyed implemented substantive policy changes related to climate-risk since 2015.

In addition, over 80 percent of the banks have adopted more explicit oversight of climate risk at the board level.

Mindy Lubber, president of Ceres, a sustainability nonprofit advocating for sustainability leadership, said it is no longer an option for financial institutions to overlook the risks of climate change.

"It is becoming ever more real and evident that climate change is a financial issue that impacts the whole economy," said Lubber.

Lauren Compere, managing director of Boston Common Asset Management, said that banks are lagging when it comes to implementing changes into their business decisions.

"What we’re not seeing quite yet is how is this going to be implemented in changes or rebalancing of lending and investing," said Compere.

After the 2008 financial crisis the Federal Reserve started requiring banks to undergo "stress tests," or an analysis to see if banks had enough capital to "withstand unfavorable economic scenarios," according to Investopedia.

This analysis is being conducted on bank’s credit portfolio’s for climate risks such as droughts, climate change or a utility’s power generation portfolio.

Over 70 percent of banks surveyed are undertaking carbon footprints or environmental stress tests. Yet, only 15 percent integrate the results into business decisions.

Yet, only 15 percent of banks assessed in the report integrate the results of the stress tests into business decisions.

"We’re looking at risk from the transaction level and a portfolio level," Gabler said. "We decided to focus on if the Clean Power Plan was enacted how would that impact our portfolio."

As a result of its findings, JPMorgan Chase revised its coal financing policy in 2016 to eliminate financing to new "green" coal mines, prohibiting financing of new coal. 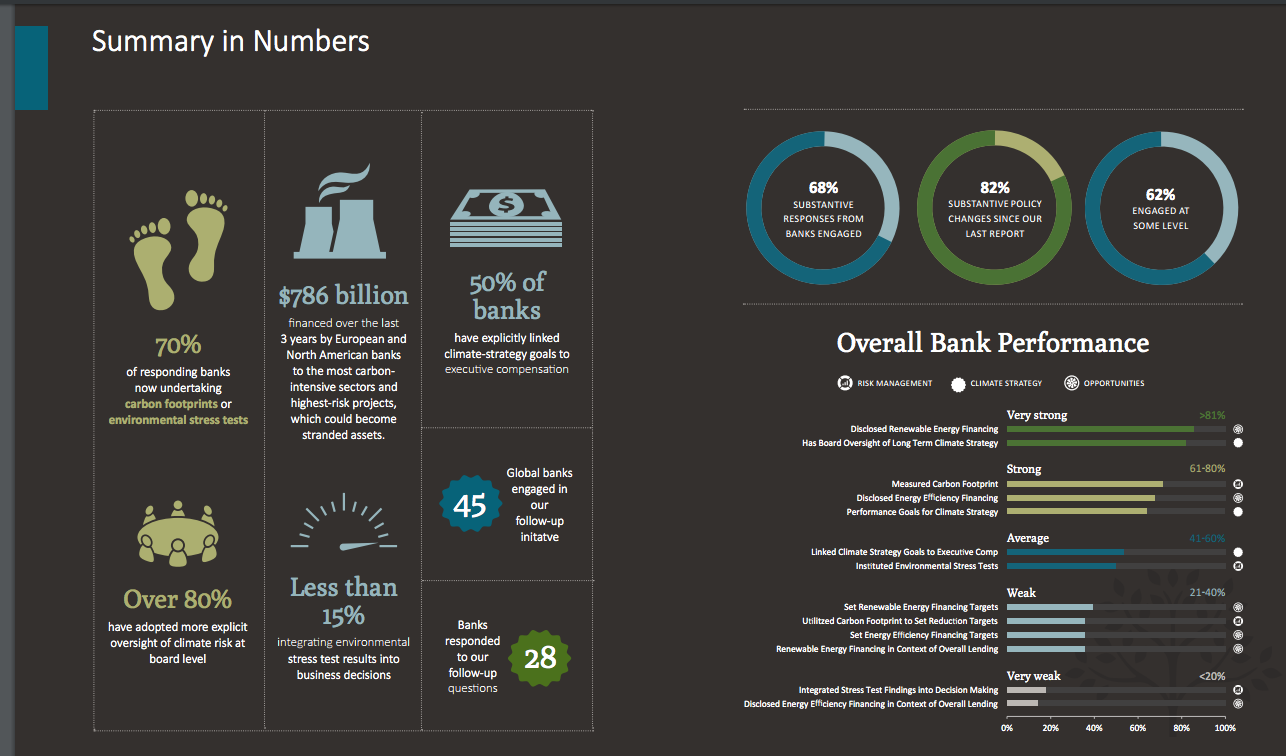 While banks are making improvements in how they are assessing climate risk, just a few banks are disclosing these risks.

The report stated that "too few banks are establishing or disclosing public goals to reduce exposure to carbon-intensive sectors or providing guidance to investors on targets for their lending or investment in renewable energy or energy efficiency."

In 2010, the SEC issued an Interpretive Guidance on climate disclosure where companies were asked to disclose any financial risk associated with climate change. It was not a rule, but a rather a guidance on how companies should look at risks.

But so far, there has been little enforcement from the SEC on this Guidance, and there is uncertainty about how the SEC will enforce climate risk disclosure under the Trump administration.

"There’s always a lot more that they can report in their financial filings, despite the fact that they are telling a lot of these stories in their sustainability report," said Lubber

The Task Force on Climate-related Financial Disclosures, led by the governor of the Bank of England, Mark Carney, and Michael Bloomberg, is trying to help companies better disclose information related to climate.

In 2016, the task force issued a guidance for companies on how to integrate climate-related information in their mainstream financial reports.

"The standard of best practices is changing and the Bloomberg task force is pushing for that change quite aggressively," said Lubber.

It’s not all doom and gloom for banks when it comes to assessing climate risks. There are also opportunities for banks to increase their lending in renewables and energy efficiency.

In addition, in 2016, MUFG Union Bank committed to $15 billion in environmental financing and investments over five years, where 25 percent of the financing will benefit low- to moderate-income communities in the U.S.

It’s not all doom and gloom for banks when it comes to assessing climate risks. There are also opportunities for banks to increase their lending in renewables and energy efficiency.

"We’re not at a point where we are going to get the trillion-dollar mark needed to address climate change, but it’s radically different than it was three to four years ago," said Lubber.

As banks are improving upon their climate assessments, they are also increasingly examining the risks of stranded assets on banks portfolios.

According to the Smith School of Enterprise and the Environment at the University of Oxford, "Stranded assets are assets that have suffered from unanticipated or premature write-downs."

In the case of fossil fuels, the risk of stranded assets is increased due to the emergence of renewables and new technology as well as regulatory risks if the world is serious about limiting the earth’s temperature from rising above 2 degrees.

For instance, UBS Asset Management recently released a report about stranded assets which looked at whether at oil and gas reserves are mispriced and are placing portfolios at risk.

Compere said that banks are particularly looking at the risk of stranded assets when it comes to coal, hydraulic fracking and tar sands.

"Clearly the banks, whether they are saying it or not, are looking at coal as a stranded asset," said Compere.