As subsidies wane, market forces drive the growth of renewables

Competitive bidding on new power installations is increasingly common worldwide. But along come risks, including the elimination of smaller green energy producers.

Solar panels cover the sloping roofs of the police headquarters in Mainz, a picturesque city on the Rhine whose most famous inhabitant was Johannes Gutenberg, inventor of the printing press. The station’s rooftop photovoltaic system was installed more than 10 years ago and is run by UrStrom eG, one of hundreds of citizens’ cooperatives that have driven Germany’s renewable energy revolution. "It was our first project," said UrStrom’s Klaus Grieger, a retired software developer.

The introduction of government incentives such as feed-in tariffs in the 1990s allowed citizen cooperatives such as UrStrom to invest in the wind turbines and small-scale solar installations that now dot the wine-growing region around Mainz. Under the tariff policy, renewable energy producers could sell their electricity at above-market prices guaranteed for 20 years — a subsidy scheme that jump-started renewable power in the country and was copied across Europe. The share of renewables in Germany’s electricity consumption rose from less than 5 percent in 1990 to almost 37 percent in 2017, and much of that energy was citizen-owned or operated.

Now that system of incentives is changing, and with it Germany’s renewable sector. Under pressure to reduce power bills — German consumers pay a "renewable surcharge" totaling $29 billion per year — and in recognition of falling technology costs, Germany recently switched from fixed tariffs to putting out wind and solar energy projects for competitive bidding. The move has upset citizen cooperatives, which find it hard to compete against big companies on the open market. But it’s been good news for consumers. Auctions late last year yielded solar and wind prices below 6 cents per kilowatt hour, rivaling the cost of fossil fuel-generated power. Prices for new offshore wind have been hailed as "zero-subsidy" renewable power.

It is estimated that almost half the renewable energy capacity expected to be added from 2017 to 2022 will be driven by auction.

Germany’s changeover is part of a widespread global shift in how solar and wind energy is being generated, one with the potential to accelerate the energy transition by increasing competition, reducing costs and scaling up deployment. But it is also shaking up the renewable energy industry, generally to the advantage of larger players.

Countries such as the United Kingdom, Mexico, Germany and Morocco are partially or wholly switching from feed-in tariffs to market-based competitive bidding. Sixty-seven countries had renewable tender policies by early 2017, up from nine in 2009, according to the International Renewable Energy Agency (IRENA). The International Energy Agency estimates almost half of the renewable energy capacity expected to be added from 2017 to 2022 will be driven by auctions. For many, this shift signals a maturing of the sector.

"As the sector evolves," said Diala Hawila, IRENA’s program officer dealing with auctions, "the question for governments about what support level to provide is answered by: Let the market tell you."

What the market has found in the past year is record-low renewable prices, a result of falling technology costs (especially solar), growing market penetration and the emergence of medium-to-large industry players. Solar PV prices dropped to as low as 3 cents per kilowatt hour in auctions in Abu Dhabi, Chile, Mexico and Saudi Arabia, for instance. Fossil fuel power currently ranges from 5 to 17 cents. While "it’s dangerous to think these low prices can be replicated everywhere," said Hawila, they nevertheless show that globally renewable power is approaching grid parity with oil, coal and nuclear power. 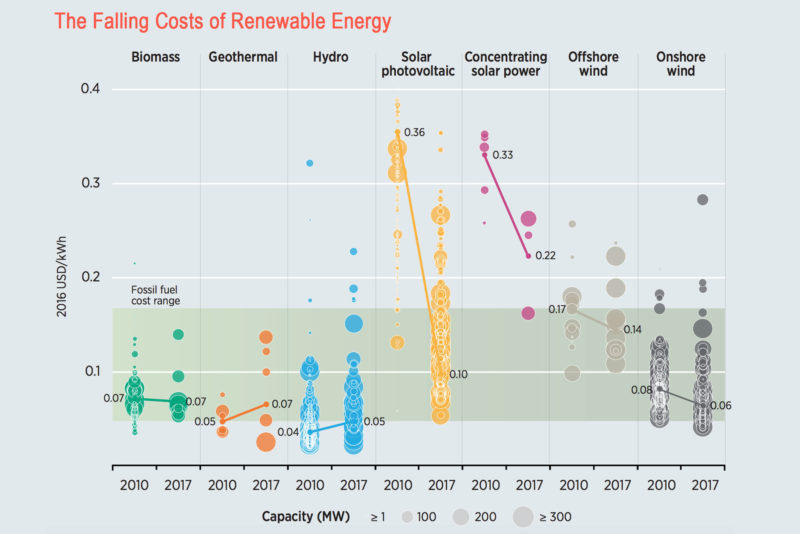 Yet the market-based system has its drawbacks, resulting in a bumpy transition in many countries. Aggressive competition can result in unrealistically low bids that don’t materialize into actual projects — something that only will be known a few years from now. And the drive to lower prices is winnowing out the small players that were instrumental in nurturing the early phase of renewables. Community energy groups find it hard to compete in the new renewable market, which is not a problem for countries such as China or India that have hardly any such cooperatives, but is a major issue in Germany. Renewable energy developers are also consolidating as global players rise and smaller local ones go bust in countries such as Japan. "Competition is good for deployment, but it can end up squeezing the sector," said Hawila.

The squeeze is evident in India, where a shift to auctions has roiled the wind industry in the past year, resulting in one of the lowest levels of new capacity in recent times. The slowdown is attributed to confusion over interstate transmission charges and the fact that low prices from the first auction — almost half the previous tariffs — led to several states trying to backtrack on existing projects commissioned under the older, more expensive feed-in tariffs. The lull has had ripple effects down the supply chain, with many domestic manufacturers going out of business. Meanwhile, developers have begun merging as competition intensifies.

For large solar projects in Germany, local cooperatives may have to merge to compete in auctions.

Still, industry leaders expect prices will stabilize this year and capacity will expand again, exceeding conventional energy additions in the next few years. "They’ve squeezed [the prices] as much as they could for now," said Arunabha Ghosh of the Council on Energy, Environment, and Water. Regulatory certainty — such as guaranteed power purchase agreements — is important to attract the institutional investments India’s renewable sector needs, he said. He believes smaller players eventually will play a role in more decentralized renewable energy generation. Unlike European countries, he notes, India doesn’t face political opposition from incumbent industries "because energy systems are still growing and there’s room for everyone to have a share of the market," said Ghosh.

The incumbent industry is certainly on the minds of members of the energy cooperatives in and around Mainz, the capital of the German state of Rhineland-Palatinate. Many here believe the new rules, including caps on renewable capacity addition, were brought in at the behest of the coal and nuclear industries, which still employ thousands of people in parts of the country. This western state, on the other hand, is dotted with wind turbines and solar PV arrays, many installed and run by villages, municipalities, and cooperatives. Renewable energy created jobs here at a time of rural exodus and also boosted civic budgets. Cooperatives prospered. The UrStrom eG energy cooperative, for example, set up its first installation in 2005 with tariffs at 54 cents a kilowatt hour, guaranteed until 2025; by 2017, UrStrom had 11 photovoltaic installations and a waiting list of investors.

Now the 200-member cooperative is re-evaluating its situation. For large solar projects, cooperatives may have to merge to compete in auctions, said UrStrom’s Grieger. A more likely solution: smaller projects that use the electricity on site or locally. The group also had been planning to enter the wind energy market but gave up the idea: It couldn’t afford to invest the resources needed to make a bid, given that they faced the likelihood of losing to larger companies. "Wind power will no longer be local," Grieger said.

Experts agree that Germany’s new market approach is tending to concentrate renewable energy generation. Wind projects are being sited in the windier northern part of the country, and a cross-border solar auction saw all bids go to Denmark, where regulations governing land-based solar plants are less stringent, noted Alexander Knebel of the German Renewable Energies Agency, an industry group. Like many others, he believes local participation is critical at a time of rising opposition to wind turbines in some parts of the country. "[T]he active involvement and the ownership of renewable energy plants in the hands of the people is crucial for the continued high approval of the energy transition," said Knebel.

Not everyone concurs with this emphasis on the local. Fabian Joas of the energy think-tank Agora Energiewende believes it’s natural that "only the pros" would be left in a mature market. Still, "completely subsidy-free investment is very risky," he said. "As a country, do you want only hard-core financial investors owning your energy assets? In Germany, the answer is no. ... Revenue-stabilizing mechanisms will continue to be needed to keep capital costs down and medium players in the game."

Countries can and should use a mix of polices or tinker with auction design to achieve objectives beyond cost, such as location or local content, said IRENA’s Hawila. That’s already happening. Some countries are exempting some smaller projects from competitive bidding. Others such as South Africa mandate a percentage of domestic ownership and local employment in wind and solar projects. Mexico tweaked its auction system to create space for community projects. Such policy experimentation is as critical to driving renewables now as technological innovation once was, experts say.

Yet despite the challenges, "we are seeing a major shift" in renewable power generation, said REN21’s Adib. Last year saw renewables dominate new additions to the electric grid. Much of that investment was in China, but the share of renewables has grown even in small countries such as Cape Verde, Rwanda and the Marshall Islands. "We need to build on these dynamics and take advantage of the lower costs and market approach to scale up the transition," said Adib.

See all by Vaishnavi Chandrashekhar