The San Diego Padres are poised to flip the switch this month on the largest solar installation in Major League Baseball at Petco Park. In fact, the 336,500 kW system will generate more electricity than all the solar systems in MLB combined. It is thus fitting that the groundbreaking Petco Park solar system is being built and installed by Sullivan Solar Power, one of the most innovative and inspiring solar companies in Southern California, if not the entire country.

The inspiring part of the Sullivan Solar Power story comes from the company’s namesake and founder, Daniel Sullivan.

A lifelong San Diegan, Sullivan was a 27-year-old electrician in 2004. Concerned about what he saw as a war for oil in Iraq, especially with the perspective that comes with being a new dad, and sensing an opportunity with a clean, domestic form of energy, Sullivan went to his boss and suggested the company get involved with solar. The boss said no at first and then, perhaps tired of his persistent employee’s repeated requests, finally relented — to a point — by saying, "If you want to build it yourself, go ahead. But we aren’t changing our focus to doing solar."

Sullivan said something to the effect of "to heck with that" and founded his own company, Sullivan Solar Power. 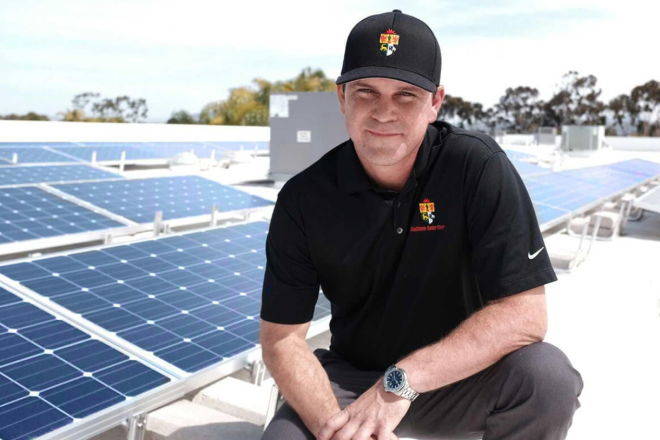 So Sullivan started by living and working out of the garage of one of his first customers. Fast-forward a couple of years and things had improved somewhat: Sullivan Solar Power had four employees and leased office space. And Sullivan was no longer living at the garage. Instead, he was living at the office — hiding that fact from his colleagues — and showering at the gym.

But the company’s mission — to fundamentally change the way we make electricity — along with its commitment to quality work, its educate-the-customer-about-solar ethos, its robust lineup of community service engagements and its use of American-made panels began to resonate in Greater San Diego. So, too did Sullivan’s money back guarantee to customers.

According to Tara Kelly, Sullivan Solar Power’s director of community development, "When Daniel started this company 14 years ago, there were less than 100 solar power systems on our local grid and it was much more expensive to go solar. Daniel, an electrician by trade, was so confident that his systems would pay off for customers; he offered to pay them if the panels didn’t produce as promised. The result? About 50 percent of our customers come from referrals." 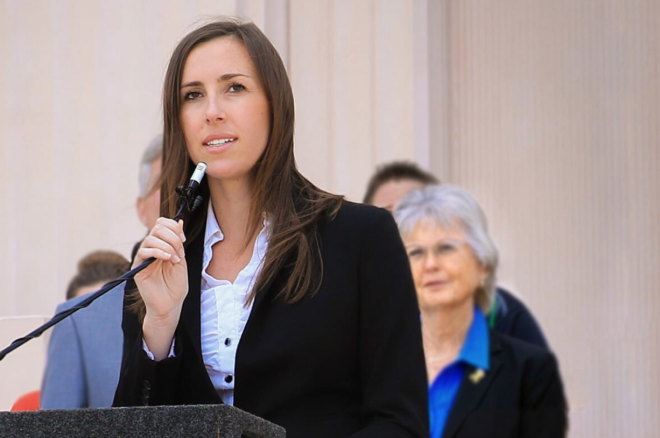 Those referrals have helped Sullivan Solar Power grow to over 100 employees in offices that serve San Diego, Riverside, San Bernardino and Orange counties. It is on several fastest-growing companies lists, from the global (Inc. Magazine 5000) to the local (San Diego Business Journal 100). It was the fourth company in the U.S. to earn accreditation from the prestigious North American Board of Certified Energy Practitioners (NABCEP).

Sullivan Solar Power’s business, in terms of installed capacity, is about a 25/75 split between residential and commercial customers, depending on the year. Local universities, from San Diego State — Kelly’s alma mater — to the University of San Diego to UC San Diego to UC Irvine are among the company’s largest customers. Petco Park is the company’s first stadium project.

"The Padres put out a request for proposal for the project and we responded," Kelly recalled. "It was a lengthy process but [we] ended up winning the bid last summer. Work began on the installation, which sits atop Petco Park’s overhanging awning, in December."

The solar power system, which will have nearly three times as much capacity as AT&T Park in San Francisco’s 120 kW — good enough for second biggest in MLB —  is just about complete. It will use high-efficiency, 470-watt Sunpower solar modules. The Padres are slated to avoid over $4 million in San Diego Gas & Electric costs over the next 25 years from this solar project. The plan was to turn it on in time for solar-generated electrons to flow at the Padres’ home opener Thursday vs. the Milwaukee Brewers. 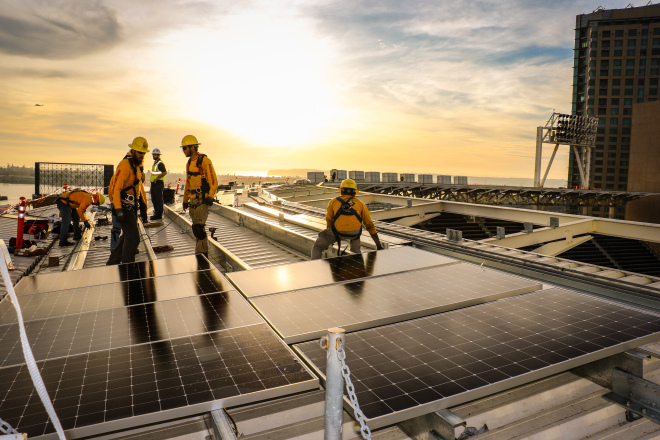 Sullivan Solar Power is partnering with the team to publicize the solar system and the value of renewable energy to Padres fans. "We have signage at Petco Park and will be showing photos or videos of the solar project to let fans know they’re in a solar-powered stadium," said Kelly. "And, this year we will collaborate with the Padres for the second annual Solar Day at Petco Park, offering educational seminars on how solar can make a positive difference for fans at their residences as well."

Educating baseball fans on the benefits of solar is just another evocation of Sullivan’s mission to fundamentally change the way we make electricity. It goes back to his original inspirations — a safe, clean environment for his son, free from wars-for-oil as well as from subsidies that favor fossil fuel development.

On this last point, Petco Park is not the only high profile venue at which Sullivan will educate the public. In 2016 and 2017, he bought full-page ads in the San Diego Union-Tribune. Sullivan used that space to write long-form articles about the costs, locally and more broadly, of fossil fuel subsidies and oil wars.

Sullivan’s is an important voice in support of the environmental, climate change-fighting and economic (such as green jobs) benefits of solar power. Here’s hoping the Petco Park installation is the first of many sports venues at which Sullivan Solar Power can share its vitally important mission with fans.