Supply chain traceability steps up a level, with Gap, Target, others on the map

Which of your tier-one suppliers is reducing emissions most diligently and consistently? Are factories struggling this month with toxics in their wastewater? What facilities are worth auditing for environmental infractions? Equally as important: how do current metrics compare with past performance?

Historically speaking, it has been tough for manufacturers to gather answers to these sorts of questions — at least with the kind of swiftness or specificity that they might use to collect data for their own operations.

That gap has inspired numerous industry-led initiatives dedicated to massive supply chain data-gathering and sharing projects, such as the Sustainable Apparel Coalition (SAC), and it has inspired dozens of cloud services specializing in traceability, ranging from EcoVadis to SourceMap. And barely one month into 2018, several of these tools are attaining new levels of maturity and transparency.

Here's one of the most notable example. In early January, six multinational apparel companies — Esprit, Gap, Inditex, New Balance, PUMA and Target — became the first to have all of their Chinese suppliers openly identified on the IPE Green Supply Chain map. Jointly developed by the Natural Resources Defense Council and the Beijing-based Institute of Public & Environmental Affairs (IPE), the map visualizes real-time and historical trend data on air pollution, soil contamination and wastewater for more than 15,000 major industrial facilities. The information reaches back at least eight years.

"These brands are stepping up because they feel their environmental supply chain management is robust enough," said Kate Logan, green choice outreach director for IPE, working with more than 50 international brands to help them more closely monitor their supply chains. "These makes a very clear connection."

IPE figures that a "staggering" portion of China's pollution is connected to exports: up to 25 percent of carbon emissions, for example, are linked to the production of items meant to be sold outside the domestic market.

And because virtually anyone can view the map, it makes a strong statement with consumers, she noted. The information is available in both English and Chinese. 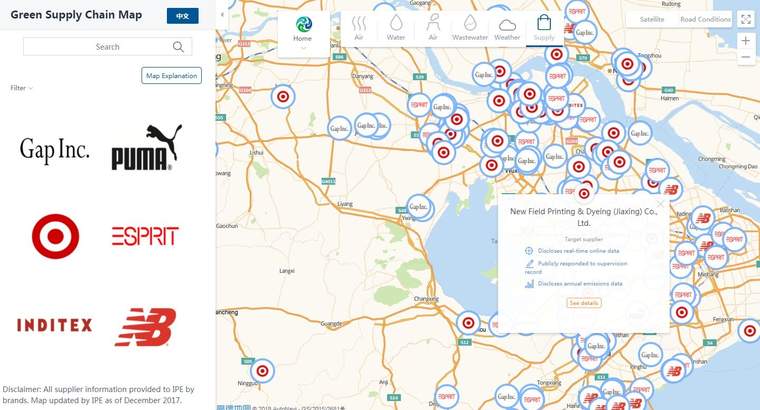 <p>The IPE Green Supply Chain Map visualizes pollution information for more than 15,000 industrial facilities across China.</p>
IPE is working closely with the apparel and technology sectors, as both industries have expansive manufacturing footprints in the region. Logan expects other companies to demonstrate similar leadership in the near future.

"Until now, customers have lacked effective tools to assess the environmental impact of their favorite brands' global operations," said Linda Greer, senior health scientist for NRDC and founder of the NGO's Clean by Design green supply chain program. "These companies that have stepped up to put their names first on the inaugural map are showing new levels of transparency on their manufacturing abroad and are demonstrating real leadership in supply chain responsibility."

For Gap and Target, which GreenBiz contacted for additional information about the new IPE strategy, sharing information about suppliers isn't actually a new policy. Both retailers started publishing some tier-two lists of garment partners back in 2016. Now, however, both are disclosing that information down to the factory and regional level.

A Target spokeswoman said the company has been working closely with NRDC and IPE since 2011 to build more transparency into this supply chain. In many cases, these organizations do not currently offer online monitoring of their operations, so using the IPE database helps Target gain more visibility into operations that might need attention without requiring it — or its suppliers — to invest in additional, proprietary and potentially duplicative data-gathering efforts.

Gap's deeper commitment to IPE will support the global team performing ongoing supplier assessments for brands such as Banana Republic, Old Navy and Athleta. All of Gap's suppliers are subject to the company's overall code of business conduct, which includes sweeping guidelines for workplace behalf and practices including protection of the environment, said Melissa Fifield, senior director for sustainable innovation at Gap.

The company uses the Higg Index platform, developed and maintained by the Sustainable Apparel Coalition, alongside the IPE information.

"In China, we're fortunate to leverage the data in IPE's database to monitor environmental performance of our Chinese suppliers," Fifield said in written comments. "We monitor the database on an ongoing basis and work directly with our suppliers to remediate any issues should they find themselves on the IPE list. IPE's Green Supply Chain map merges these two publicly available sources of information and, we believe, takes transparency even further."

The Higg Index, the tool developed by SAC and used by more than 8,000 businesses globally, is also undergoing a facelift intended to improve transparency across the industry. Its latest innovation is the Facility Environmental Module, a tool that helps standardize the way that apparel, footwear and textile manufacturing sites share information with the brands buying their products.

The update covers water use, waste, emissions and chemicals management. As of early January, more than 2,000 factories had registered for the new version. SAC's ambition is to have 20,000 facilities and 400 brands on board by the end of 2018.

"The theory of change of the SAC is straightforward and profound: putting standardized sustainability measurements that are both deep and profound in the hands of key decision-makers in the apparel and footwear value chain will incentive them to make better decisions that collectively reduce the environmental impact and increase the social justice of the entire industry," said Rick Ridgeway, vice president of public engagement at Patagonia. "With Higg FEM, the coalition has taken the biggest step yet towards proving that theory, and showing the world how the industry that started the industrial revolution is leading the world into the sustainability revolution."

Keep your eyes on blockchain

While the Higg and IPE maps are currently centered on improving transparency across the apparel and fashion industry, other initiatives under way aim to address the issue of traceability in other sectors — starting with food. An appreciable number of these experiments build on blockchain, the underlying ledger and transaction system for the bitcoin digital currency.

One collaboration to watch teams Sourcemap, an open source network of supply chain information that has provided maps for the likes of Mars, Eileen Fisher and Stonyfield Farm, with Provenance, which is working on a variety of applications for tracing items across a supply chain and verifying certain data. The two are piloting joint systems with several unnamed food businesses. The ultimate aim is to allow consumers to dig more deeply into food labels, according to a joint press release issued in mid-2017.

Provenance is also involved with a year-long project with Unilever, which will use blockchain to manage transactions within its tea supply chain. The plan is to offer special financing to farmers that commit to certain sustainable farming methods, using blockchain as a validation method.

Also of note is the Blockchain Supply Chain Traceability Project, a World Wildlife Fund initiative that combines technology from developers at the ConsenSys consortium and integrator TraSeable. The effort is testing ways of using blockchain to verify the source of Pacific tuna, with an eye to eliminating unregulated fishing and shutting down operators that use slave labor. Tuna processor Sea Quest Fiji is also supporting the project. (The general principles are similar to an effort at Tri Marine, which handles the private-label business at Costco and Fred Meyers.)

Another player to watch is Ambrosus, a blockchain and internet of things startup eco-founded by a former executive from the United Nations Trade and Investment Division and a research and development project lead for Nestle. The company last fall raised $30 million to work on applications related to addressing food spoilage and waste.

Of course, blockchain isn't the only answer. Another company moving more aggressively to address traceability across the food supply chain is FoodLogiQ, which last fall snagged an investment from Renewal Funds, a venture capital fund in Vancouver, B.C., that previously backed Seventh Generation and Sweet Earth Foods. The amount of the funding round was not disclosed.

Will technology be the game-changer for rising transparency in the fashion supply chain?

20 sustainability apps that made waves in 2013

Supply chain tool for Gap, H&M, Levi's gets a makeover