<p>Support for green construction and LEED certification dipped slightly in 2009 but remains strong across the past three years despite the recession, according to the latest green building survey by Allen Matkins, Constructive Technologies Group and the Green Building Insider.<br /> &nbsp;</p>

Support for green construction and LEED certification dipped slightly in 2009 but remains strong across the past three years despite the recession, according to the latest green building survey by Allen Matkins, Constructive Technologies Group and the Green Building Insider.

Cost has been a major driver for green construction during the downturn and those same concerns about expense have affected expressed support for LEED certification, the survey found. 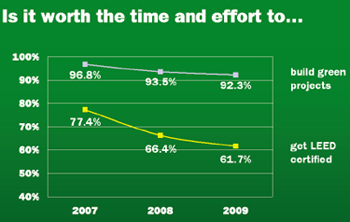 Sixty-two percent of the professionals surveyed in 2009 told researchers they support attaining certification under the Leadership in Energy and Environmental Design standards developed by the U.S. Green Building Council.

The 2009 percentage represents a 4.7 percent drop from the 66.4 percent support expressed 2008, and the 2008 response was 11 percent less than the 77.4 percent support reported in 2007. The rate of decline slowed across the three-year period, however, and the majority of respondents still support pursuing LEED ratings, researchers noted.

In contrast to the dip in expressed support for LEED decline, the Green Market and Impact Report 2009 by Green Buildings.com Executive Editor Rob Watson found that LEED-certified floor area hit a new high in last year. More than 350 million square feet of buildings attained LEED certification in 2009. The amount is three times greater than the certification record set in 2008 and exceeded all certified floor area to date by more than 30 percent, Watson said in his report.

The green building industry totaled over $553 billion worldwide in 2009 , the Allen Matkins report noted, and is the fastest growing sector of the building industry with an estimated CAGR of 108 percent through 2015.

Other results from the survey include:


Top strategies for reducing the perceived risks of green building are retaining green consultants (such as LEED-AP consultants), measurement and re-commissioning, periodic testing and contractual risk shifting. Allen Matkins noted the perception that green building is riskier than traditional construction persists even though LEED-mandated building commissioning reduces the risk of building system failure.

Green leases are on the rise, with 30 percent reporting they're involved in the green leasing arena.

Purchase of carbon offsets stands at 7 percent for a second year in a row.

Allen Matkins Leck Gamble Mallory & Natsis LLP is a California-based law firm. A group of multi-disciplinary technical consulting firms that focus on problem-solving in the built environment comprise the Constructive Technologies Group. And the third partner in the survey, Green Building Insider, is a publication of WPL Publishing Co. Inc.