Surpassing 100 members, the RE100 signals a wave of change

That’s exactly what RE100 is doing: 101 of the world’s biggest and most influential companies are committed to 100 percent renewable power, with AXA, AkzoNobel, Burberry and Carlsberg Group among the latest big names to sign up.

We’ve passed an important milestone. When the Climate Group launched RE100 in 2014, many businesses considered 100 percent renewable electricity to be an impossible stretch goal, largely due to the additional cost and a lack of options in developing markets. But 13 leading companies including IKEA Group, Swiss RE, BT and Mars were prepared to put their heads above the parapet.

Three years later, more than half of our membership is going completely renewable by or before 2020 — and several companies already have made it. Leading companies are recognizing that affordable options increasingly are available, and that future success means embracing renewables — sooner rather than later. RE100 has succeeded in changing the conversation around business and renewable energy, and what was deemed impossible is quickly becoming the norm.

Our members represent 146 terawatt-hours (TWh) per year of renewable electricity demand — the equivalent of the electricity required to power Poland or New York state. And with members operating around the world, from Europe and North America to Asia, South America and Africa, RE100 is at the forefront of a truly global movement.

So — how important is this in terms of addressing climate change? Are we about to reach a "tipping point," whereby a transition to a renewable electricity system becomes unstoppable, and the end of fossil fueled power becomes a medium-term certainty?

The technology is certainly ready, and rapidly falling costs are proving to be a game changer. The World Economic Forum reports that solar and wind generation is the same cost or cheaper than new gas and coal in 30 countries worldwide, and power purchase agreement prices for solar power have fallen by about 75 percent over the last seven years, making renewables a more affordable option for business.

Battery production is also stepping up to the plate to deliver storage to cover intermittent demand, and smart technologies are enabling both demand and supply side load management.

So maybe we already have hit that elusive tipping point. How will we know? Gigawatts of new renewable installations have exceeded new fossil fuel installations every year since 2012 (PDF). It’s likely that the fossil fuel power industry already has hit its "Kodak moment," after which its decline and replacement by new technology becomes an inevitability.

But a 200-year-old fossil fuel habit can be hard to shake off, even when it makes great business sense.

Leading companies are recognizing that affordable options increasingly are available, and that future success means embracing renewables — sooner rather than later.

Outdated policy and market structures, designed for old centralized power systems, must be updated to enable the flow of capital from companies and others wishing to buy renewable electricity — whether it be in Europe, China or South Australia.

We also need to supercharge the often-glacial pace of energy policy review before government programs lock much of Asia and Africa into long-term investments in expensive and polluting legacy technologies.

RE100 companies represent an unavoidable force for action — a call for governments, utilities and other solution providers to create electricity markets fit for a low carbon economy.

Change is well underway. Where we have seen President Donald Trump take a lonely back seat on climate action, our members are stepping in with calls for bold action — backed up with gigawatt-scale, business-focused investments in renewable electricity infrastructure. With its new 47 MW solar farm in North Carolina, Starbucks is a good example.

At EU level, progressive policymakers have found unexpected allies in our membership. Google and IKEA, for example, have led calls for ambitious targets and plans enabling long-term investment in renewables, as part of the Clean Energy for All Europeans package.

But the fact is, to keep warming well below 2 degrees Celsius, we need to pick up the pace. That’s why the Climate Group is calling on leading companies to influence their peers and suppliers to switch to 100 percent renewable electricity too, so that we may move faster to a strong, low-carbon economy supporting millions of jobs.

Some of our members, such as Apple and H&M, already are doing this. Already 96 percent renewable in its own operations, Apple has secured commitments from eight of its suppliers to produce all of their Apple products using 100 percent renewable electricity. 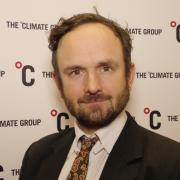 Head of RE100
The Climate Group
@samkimmins

See all by Sam Kimmins